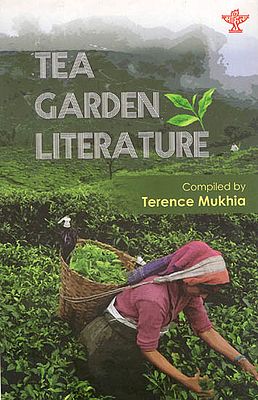 $16.00
Notify me when this item is available
Save to Wishlist Send as E-card Share by Email
About the book

Terence Mukhia (b. 1975). He writes in both Nepali and English and has seven books to his credit. He entered the literary world in 1991 with the Nepali poem Pitaka Swarnim Vaniharu (Golden Words of Father). He is the Campus — Coordinator at Salesian College Sonada, where he has been teaching Philosophy and English since 1998 and 2002, respectively.

There may not be many people on Earth who have not had the experience of sipping tea. There are tea gardens all over the world and so there are humble souls—the labourers, who prepare tea by the sweat of their brow. And the truth is that the Owners own the ‘green gold’ in exchange of a pittance for the hard labour of the labourers, which makes us ponder and delve deeper into the real- life situations in the tea gardens. That unique experiences, thoughts and feelings—both good and ugly— would seek an outlet through songs, poems and other forms of writing, is but natural. Who can thwart the thoughts and feelings of those who have delved into the depths of a tea garden? Writings related to tea gardens were not uncommon but they lacked designation. So, we have thought of giving them a Shape and a name by classifying them under a class. The expression of tea garden life in the words of truth and beauty has led to the birth of a unique variety of literature revolving in the periphery of tea gardens which we have named ‘Tea Garden Literature’. This book is unique in the sense that it is the first step in the development of the ‘brainchild’ of those minds who thought of Tea Garden Literature, the foremost being Dr Jiwan Namdung.

Broadly speaking, there can be tea garden literature of various communities worldwide but the context that has generated tea garden literature in Darjeeling, Doars, Jalpaiguri, Sikkim, Assam and North Eastern states of India may be different from the context of the tea gardens in other states or nations. Accordingly we can expect Varieties. However, at the onset, we intend to make it clear to the readers that the term "Tea Garden Literature’ used herein refers to a part of the Indian Nepali literature. This book is an outcome of the seminar on ‘Tea Garden Literature’ held on September 22, 2012 at Sahitya Akademi, New Delhi. The inaugural session began with words of welcome by Dr K. Sreenivasarao, Secretary, Sahitya Akademi, New Delhi. Dr Jiwan Namdung, Member, Nepali Advisory Board, Sahitya Akademi, highlighted the importance of tea garden literature. K. S. Moktan, retired I. G. of Police, delivered the keynote address during which he highlighted the significance of the relationship between tea gardens and the Nepali speaking community in India specially from Doars, Darjeeling, Sikkim, and the North East. Since the image of tea garden is intimately linked with the identity of the Gorkha community in India, he highlighted the importance of having tea garden literature.

A total of nine papers were presented in three technical sessions. The articles in this book are those very nine papers which have been reworked to suit the purpose. An initial chapter has been added to provide some sort of theoretical framework to tea garden literature. Bijay Bantawa has rightly pointed out that the Nepali writers in India emerged in 1914 and ever since we find writers who are influenced by socialistic trends and feelings related to tea gardens. Bantawa depicts the plight, situation, beauty and feelings related to tea gardens present in the writings of Nepali writers in different forms and in different times. Many great writers have pointed out the exploitation of those who work in tea garden by those who own said tea gardens, through literary writings, but the tradition and legacy still. continues.

Garima Namdung opines that there is no clear cut demarcation as to when the concerns of the tea gardens enter literature as a theme. It has always been there in the writings of the communities of Darjeeling. She focuses on the role of fiction in presenting the tea garden society in a. realistic manner with the help of her study of three novels related to tea gardens: Shiv Kumar Rai’s Georgette ko Sari (The Ger-orogette Sari) (1956), Indra Sundas’ Juneli Rekha (Line of Moonlight) (1979) and Raj Bahadur Rai’s Rangdu Camano Pariwes Bhitra (In the Milieu of Rangdu Tea Garden) (2008). She shows how the universal nature of the relationship of labour and production, a miaster-servant relationship through exploitation, oppression and subjugation of the worker, lead to the game of power and resistance like a see-saw.

Indramani Darnal has highlighted the life of the tea garden workers as mentioned in the novel Sahara of Indra Sundas. She also talks about some important poems written by eminent writers like Agamsingh Giri, Dr. Jiwan Namdung and others. She talks about how a film like Tamasi has been made highlighting the life situation of Dhanraj Tamang of Singtam Tea Estate who represents people living in the tea gardens. She opines that literature should not be just a compromise of poems and novels but should also help in educating the society.

Laxman Srimal has focused on the political scenario of tea gardens. He talks about how the poor tea garden workers had also participated in the freedom movement of India. He views literature as a source through which every conscious person can exchange his/her view and thoughts as wise people. He requests us to bring not only the green gold but also its hard working labourers into the limelight of global scenario.

Prem Pradhan has presented the historical background of tea garden literature. He talks about the literature produced before and after independence dealing with the problematic issues related to tea gardens. The workers suffer from evils like oppression, poverty, alcoholism and so on and so forth. Tea gardens have given birth to many eminent writers as well. Many budding writers are coming up who have experienced and understood the problems of tea gardens.

Yogbir Shakya has selected five poems related to tea gardens and has presented the analysis of the same. The five poems are: Kamal Theeng’s Chiyabarima (In the Tea Garden), Begbasant Thapa’s Kaman ko sairan ani (The Siren of Kaman And), Madan Bihogi’s Hami nirwasit huna lagdaichau (We are about to be Displaced), Agamsingh Giri’s Phagaun (Spring), and Bindhya Subba’s Parichay (Introduction). He first presents an extract from a poem followed by its analysis highlighting the situation of a tea garden society. .

We not only hope but believe that tea garden literature will flourish and will establish itself firmly one day. 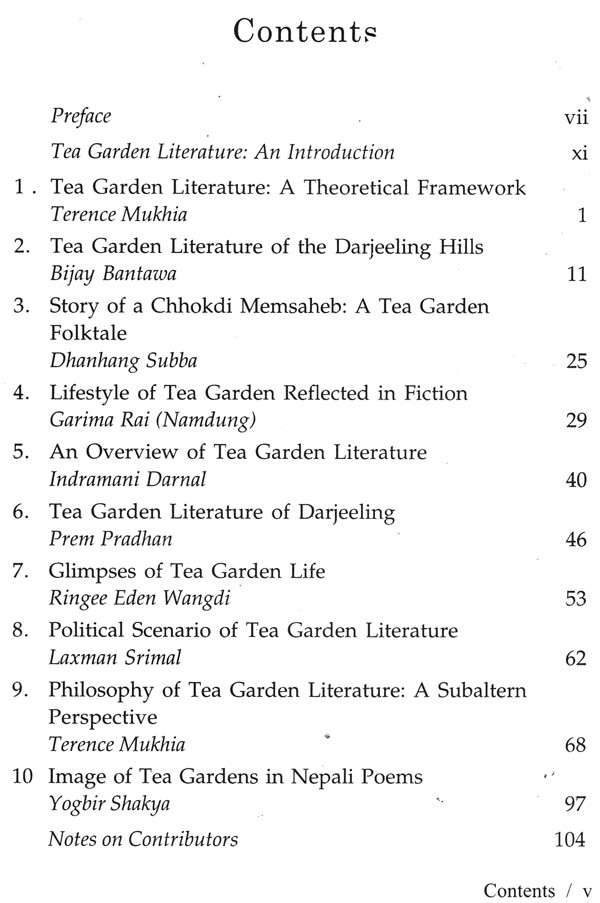 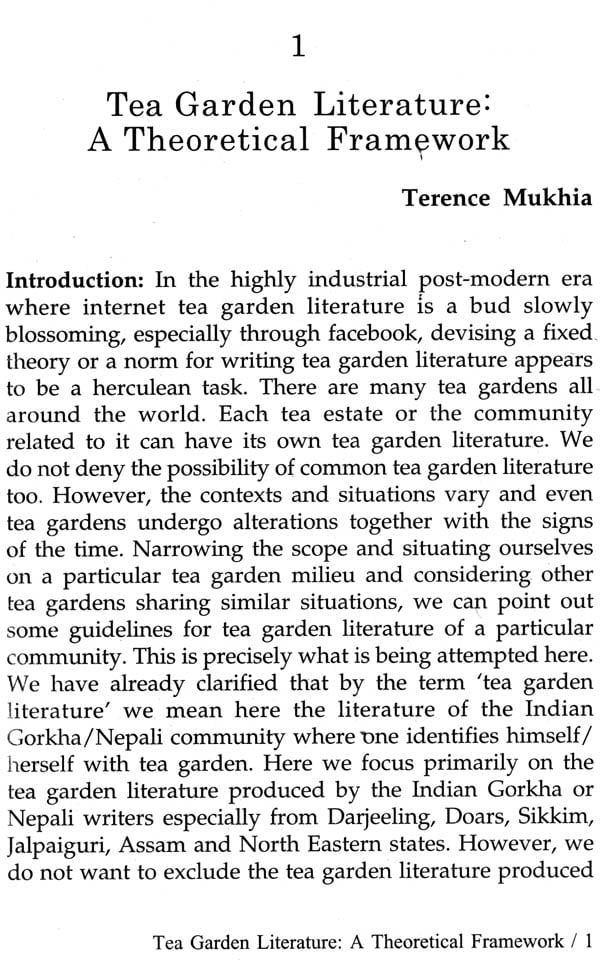 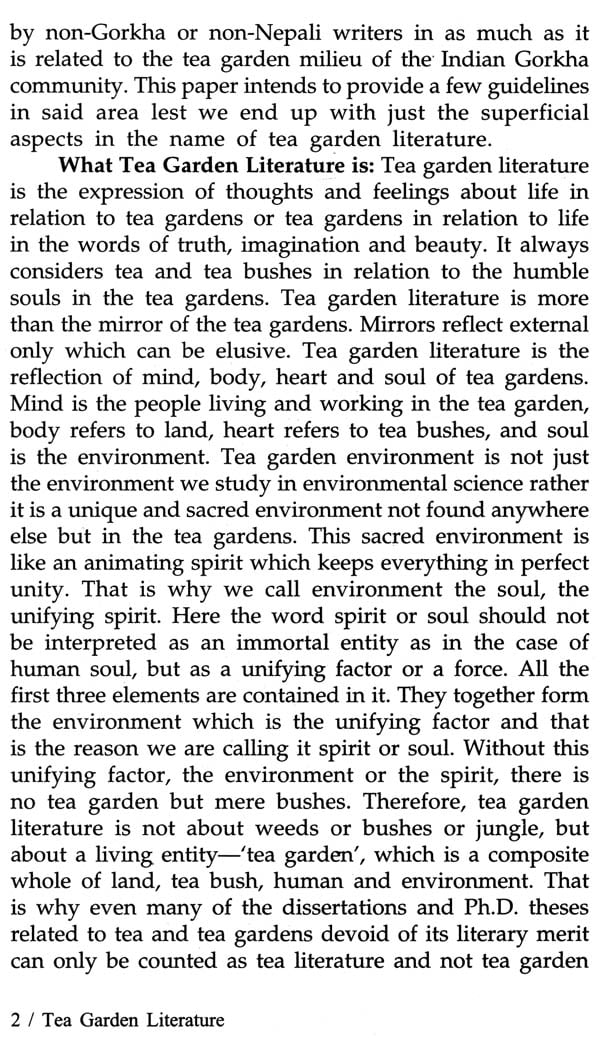 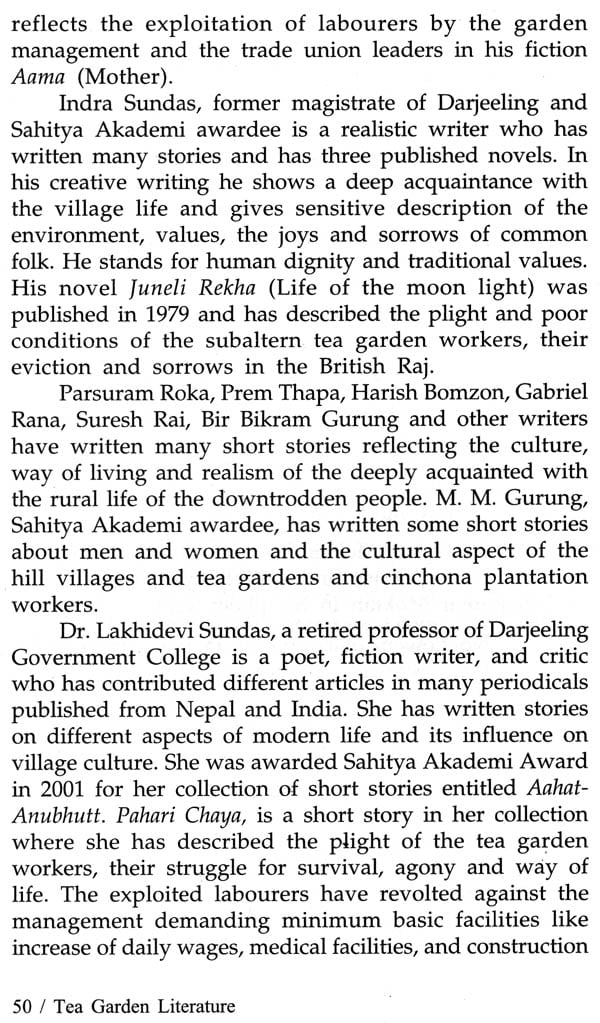 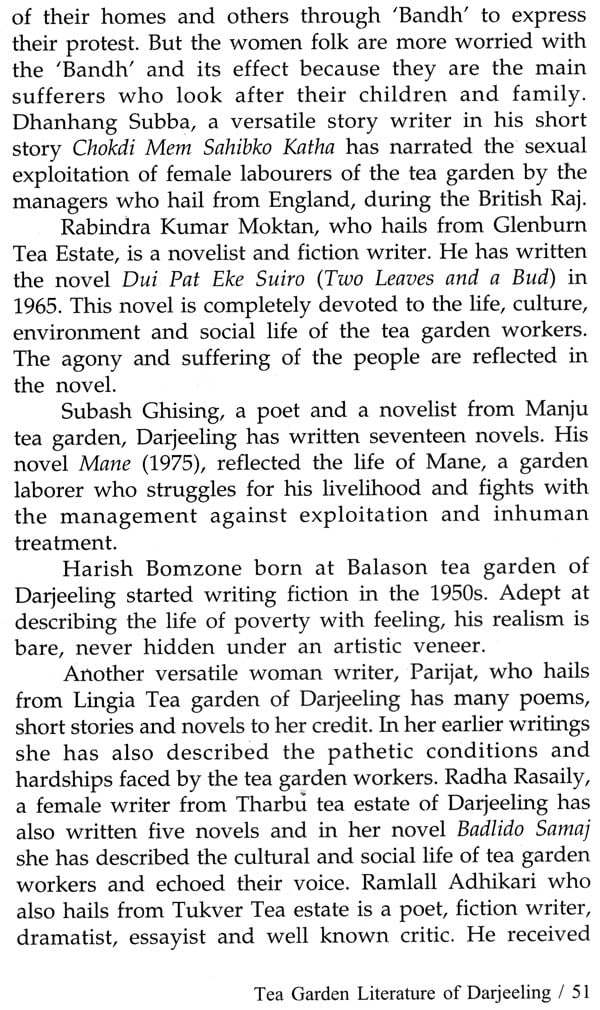 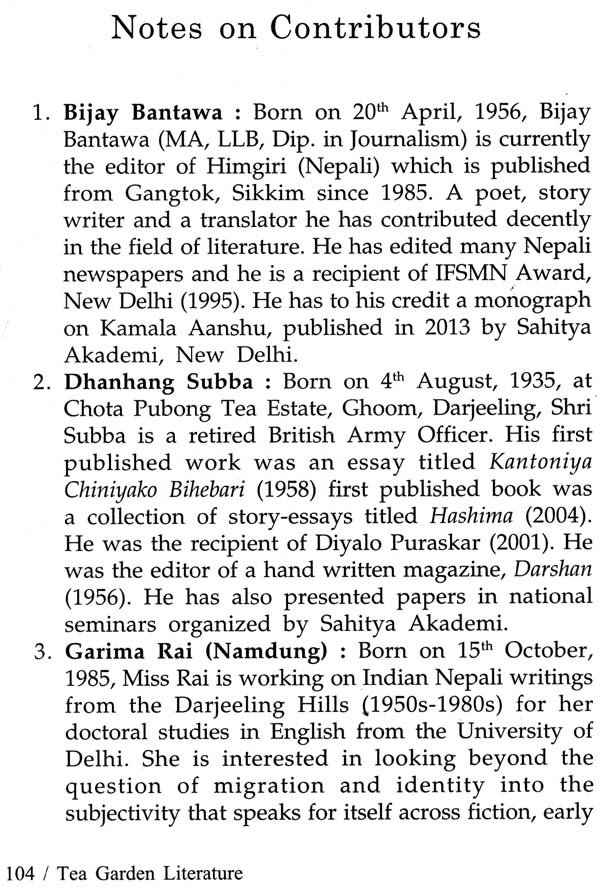 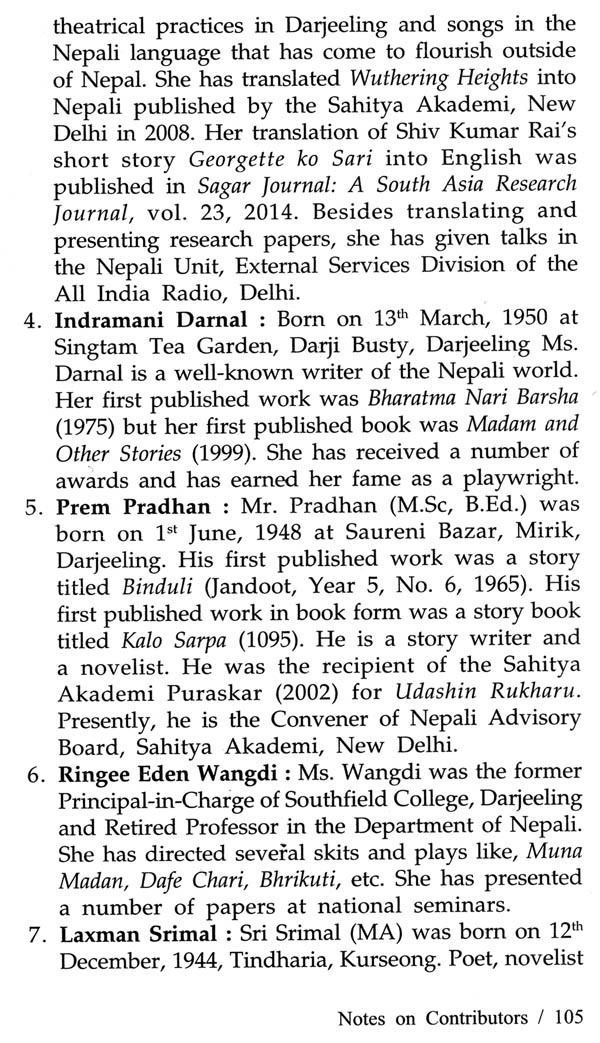 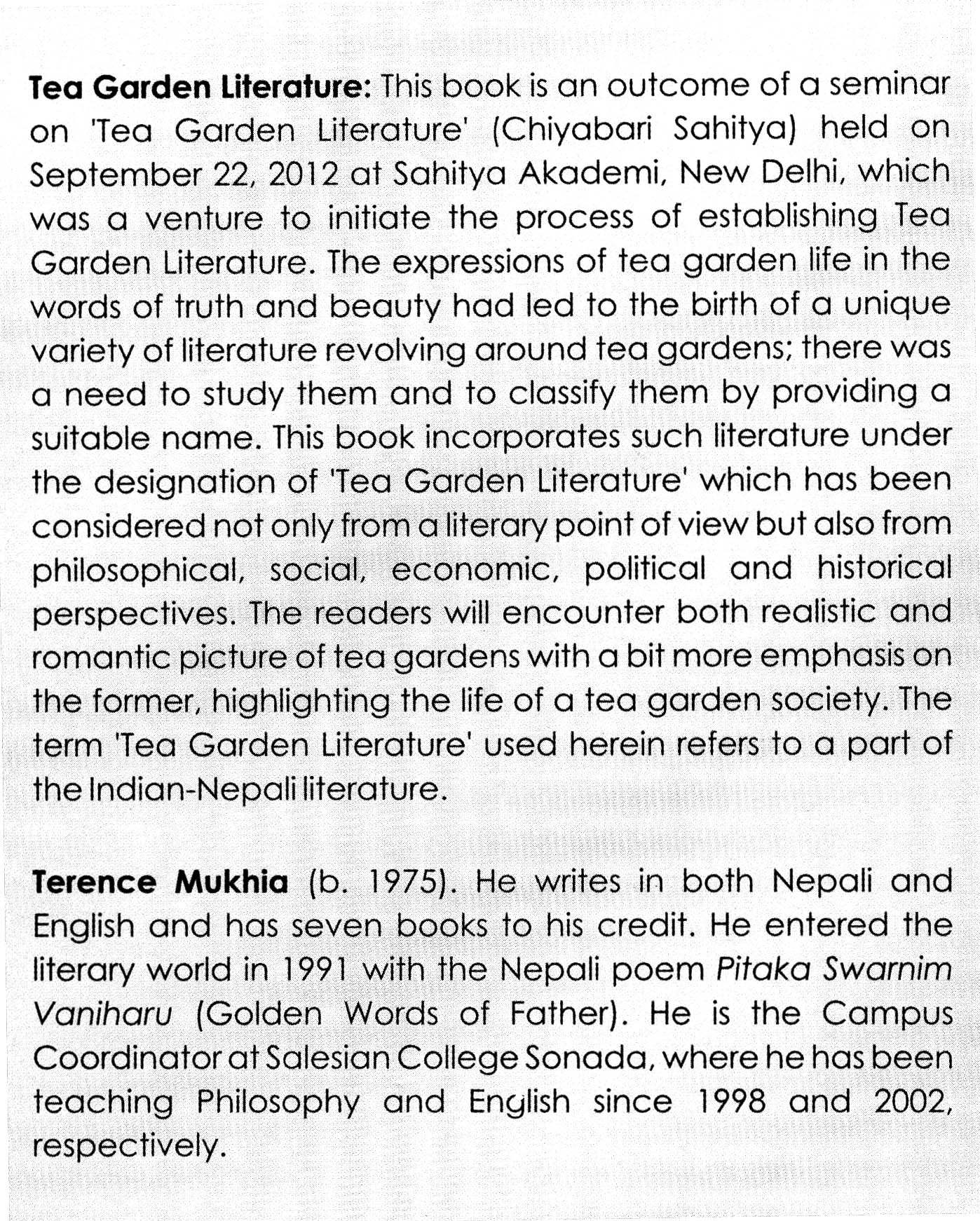