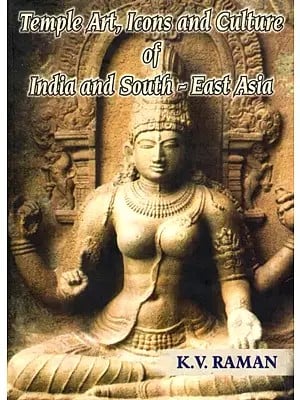 Temple Art, Icons and Culture of India and South-East Asia

This book presents a valuable collection of essays written over a period of forty years during the author's illustrious career as a distinguished art-historian and archaeologist. These articles were originally published in various national and international journals, volumes and seminar proceedings. They cover a wide range of topics, such as temple-architecture, iconography, folk culture, art and other aspects of history and culture of India and South-East Asia.

Prof. K.V. Raman has clearly highlighted the unique cultural relations between India and the countries of South-East Asia like Thailand, Indonesia, Cambodia, Vietnam, and Laos. The style of architecture, iconography and the numerous Sanskrit inscriptions found in these places show the close relations which these regions had with India since ancient times.

The studies are based on extensive fieldwork and are amply illustrated with a large number of beautiful photographs. The volume will be of considerable interest to both the senior scholars and students of Indian culture.

Prof. K.V. Raman is one of the senior and distinguished scholars whose valuable contributions to the field of archaeology, history and art are well known by his discoveries and publications such as The Early History of the Madras Region (1957), Some Aspects of Pandyan History (1972), Sri Varadaraja Swami Temple, Kanchi (1975), Sculptural Art of Tirumala Tirupati (1997), Excavations in Uraiyur (Ed.) (1988), besides many other books and research papers and endowment lectures.

Some of my former students and esteemed colleagues suggested to me to bring out a collection of my research papers and lectures published in journals and seminar proceedings. Some of them took pains to collect some forty articles on art, architecture, iconography and folk-culture. The themes of papers are varied and include evolution of gopura architecture, different types of mandapas balustrade sculptures of Kerala; Hoysala influences on Vijayanagara art; art heritage of Kanchi and also that of the Pandyas; the role of the temples in the socio-economic life; temples as great centres and patrons of art and dance; rare Chola sculptures from Kumbhakonam; royal portrait figures in south India; Rama shrines and icons in Tamil Nadu and iconography of Vaisnava saints.

There are also articles dealing with ecological traditions, village deities and folk cults as undercurrent of cultural unity of India. The other unifying factors are to be seen in the sacred tanks and in Indian concepts and practices pertaining to pilgrimage.

There are two articles on the renowned Indologist, Ananda Coomaraswamy-one on his contribution as an art-historian and another on his views on early Indian architecture which will be found extremely interesting.

The other major theme of my papers pertains to cultural contacts between India and South-East Asian countries. The nine papers in the collection touch on themes like the influences seen in the place-names, personal names, names of temples and icons besides the other cultural and artistic linkages based on field-work and observation. In this connection, I would like to express my gratitude to Professor Noboru Karashima, the well-known Japanese scholar and specialist in South Indian history who gave me the opportunity to participate in the project led by him on 'Reconsidering the Relations between South-Asia and South-East Asia during Ancient and Medieval times' (1991 1995).