India is well known for its rich cultural heritage. Tamil Nadu especially has the maximum number of temples which were built centuries ago. These temples are noteworthy and remarkable for the auric vibrations they create and spread due to the strict ritualistic discipline observed by ancient yogis and Siddha Purushas who straddled across the country.

Many of these temples are well maintained and regular poojas are conducted by archakas with religious fervour and deep devotion, thanks to a growing stream of devotees and their staunch support. There are some rare and not so well-known temples about which Smt. B. vijayalakshmi has dug out details from her investigation and research and published them in the form of weekly articles in the esteemed newspaper, Indian Express. These articles have now been compiled and brought out in a wonderful ready to read book format. This monograph I believe is of great historic value for its educative information regarding rare and unfrequented temples in and around the capital of Tamil Nadu. I heartily congratulate B. Vijayalakshmi for striving to impart useful knowledge to enthusiastic temple lovers through her book.

In this age of fantastic scientific and technological advances and materialistic pursuits and egoistic tendencies, some have begun to question the sacred concepts cherished by their forefathers. There is a lot of talk on the merits and demerits of prayers. For instance, some believe in praying at least for their own kith and kin, while others might dismiss it as a waste of time. But several instances in our life vividly reveal to us the presence of a "Silent Power" at work in this boundless universe with more than clockwork precision.

Dr Alexis Carrel, physician and Nobel prize winner, says "Prayer is the most powerful form of energy one could generate. Prayer, like radium, is a source of luminous self-generating energy. When we pray, we link ourselves with the inexhaustible, motive power that spins the universe, our human deficiencies is filled and we arise strengthened and rejuvenated."

To hold on to a world, that is impermanent, changing, subject to decay, we should strive to realise "Brahman", which is within us. Brihadaranyaka Upanishad says, "That which one cannot think with the mind, but that, by which they say, the mind is made to think, know alone, to be 'Brahman"'.

We are aware of the spiritual quest of Adi Sankara who established the Shanmata or worship of Shiva, Vishnu, Shakti, Ganesha, Surya and Skanda. The worship of these deities was considered as a method for the ultimate realisation of the Self (Brahman). Stotras were composed by him, to enable devotees, to offer worship to Gods and Goddesses of their choice so that through devotion the mind can be disciplined, and spiritual prayers become definite results.

It is certainly laudable that Mrs. B. Vijayalakshmi, a senior journalist, has chosen to explore the temples in and around the city of Chennai for attaining the fuller and useful information about temples and practice Bhakti Yoga. I am sure this would be an inspiring guide to Asthikas.

It gives immense pleasure and satisfaction to the devout to know about the historical and mythological connection of our places of worship. And it is this desire which drove me to write about temples which have been part and parcel of our lives. My first article in a newspaper (The New Indian Express) was about Gangadeeswarar temple in prime Purasawalkam area whose Chola legacy revealed its legendary past. While Chennai and its suburbs are dotted with hundreds of temples, limelight does not fall on all of them. In a bid to identify such not- very-popular temples despite having a hoary tradition, I began writing a column 'Temples of Chennai' in The New Indian Express nearly 15 years ago. At this juncture, I would like to recall the encouragement given by late Mr R.Vijayaraghavan, former Deputy Resident Editor of The New Indian Express. It was on his suggestion that I began exploring temples in every nook and corner of the city every week. Also I would like to thank Mr Manoj Kumar Sonthalia, chairman of The New Indian Express, for giving the green signal to my efforts to bring out the articles on temples in the form of a book. This book, I fervently hope, would serve as a guide to devotees and for that matter, any visitor or tourist, before they explore the places for themselves or would like to know from the place where they are, about the spiritual heritage of the city.

From Narasingampuram to Kundrathur's Thiru Ooraga Perumal temple, Mylapore's Tiruvalluvar and Appar Swamy temples and Satya N arayanaswamy temple near Central, I have highlighted the mythological, cultural, historical and social significance of 69 temples in and around Chennai.

Visiting temples every other week and researching about them before I could start writing would not have been easy but for the grace of the Almighty and the continuous support of my family. I continue to seek His benevolence even as I wish to place on record my gratitude to my parents as well as my husband without whom this would not have been possible. 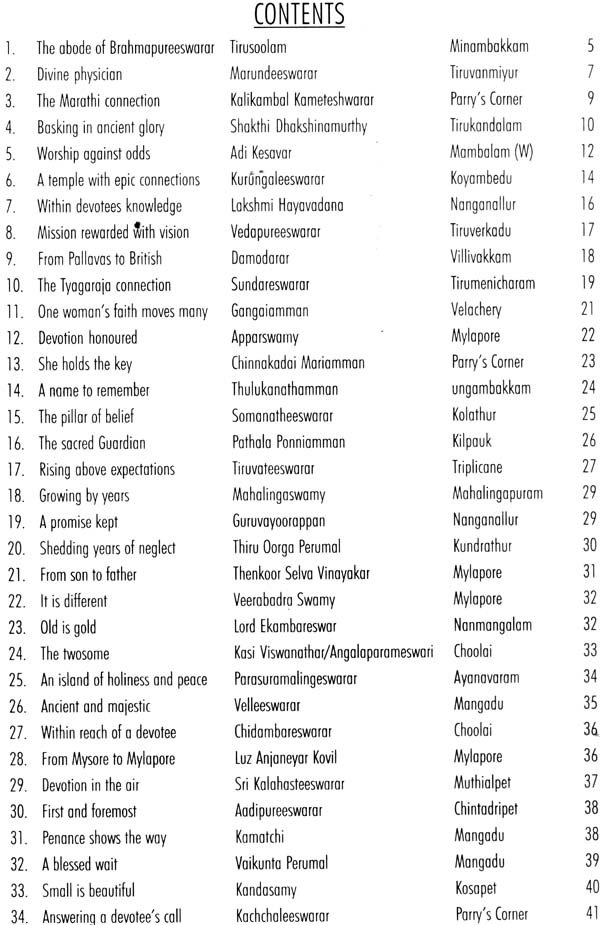 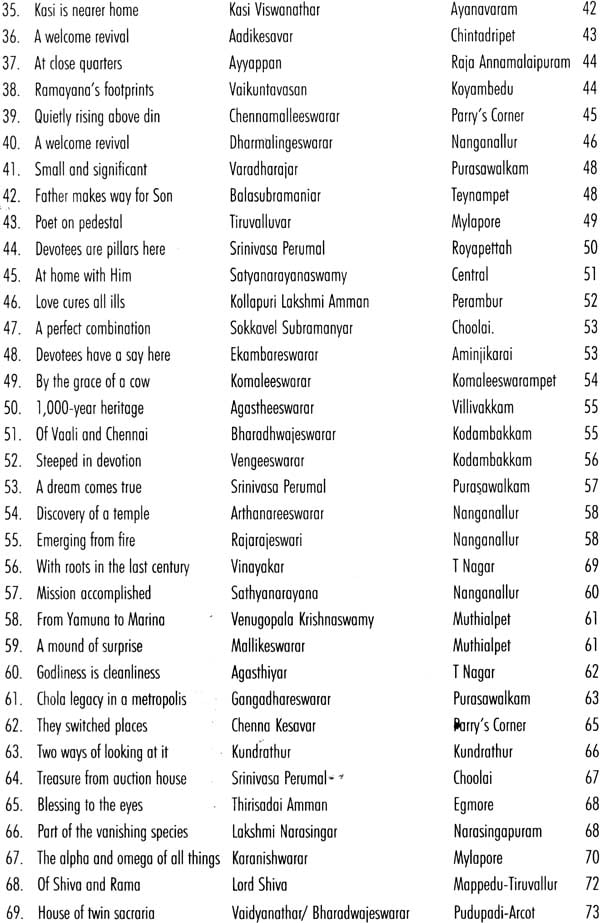 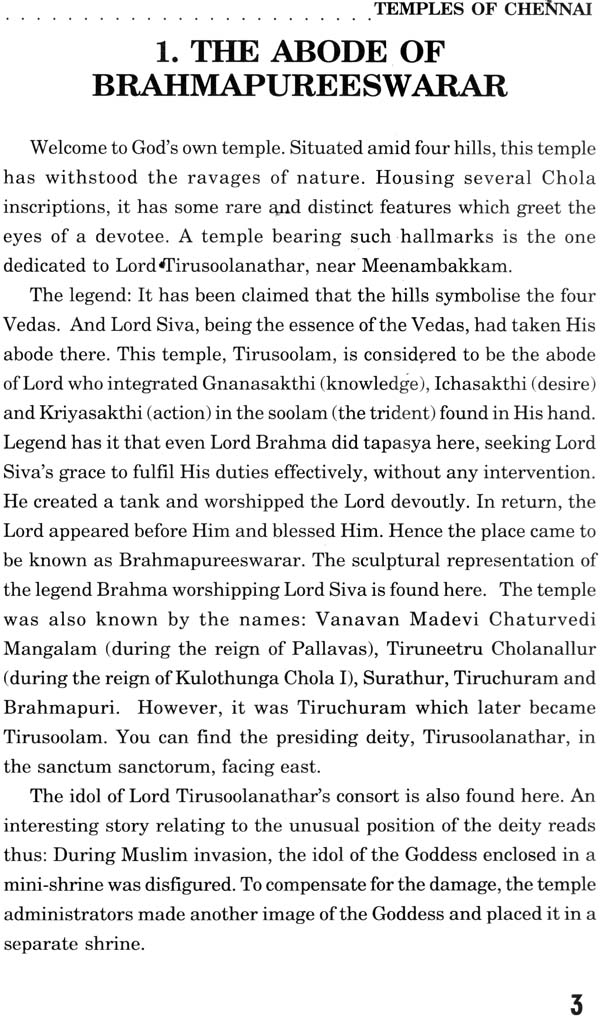 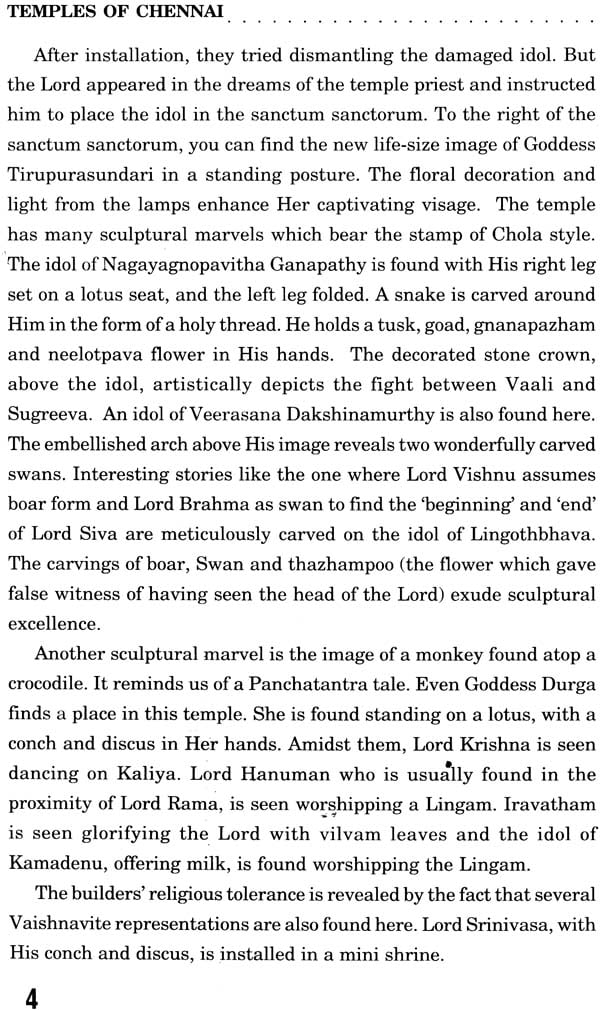 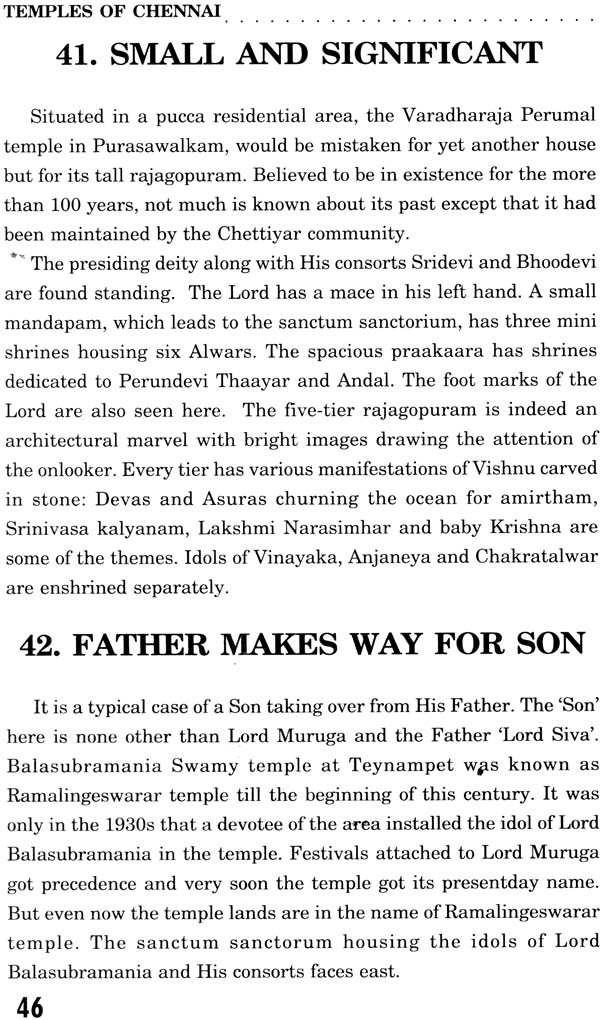 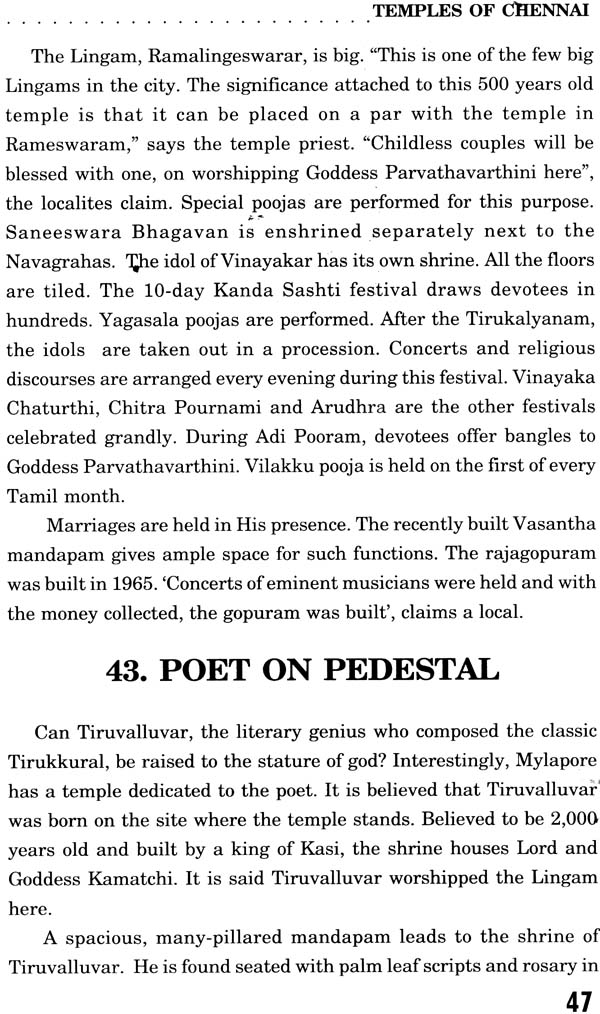 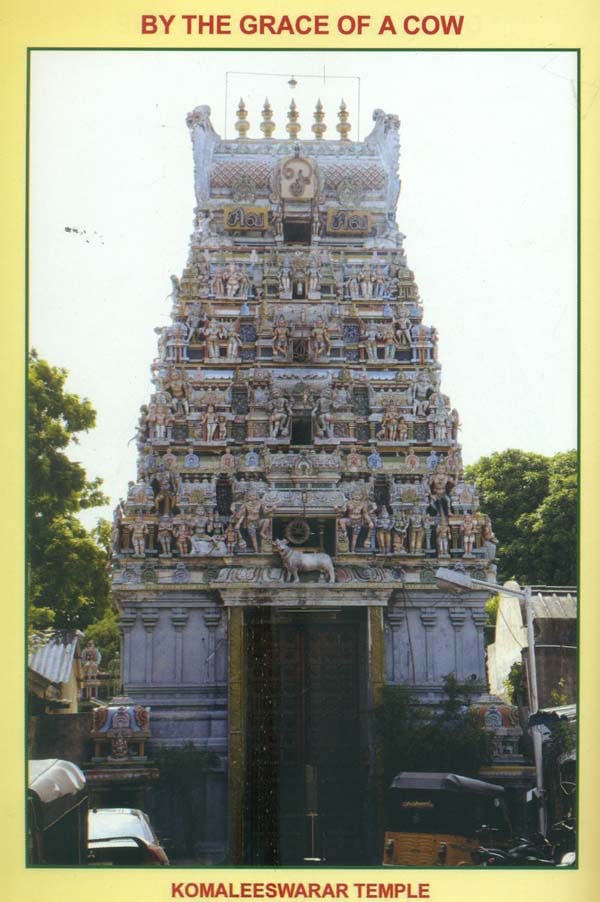 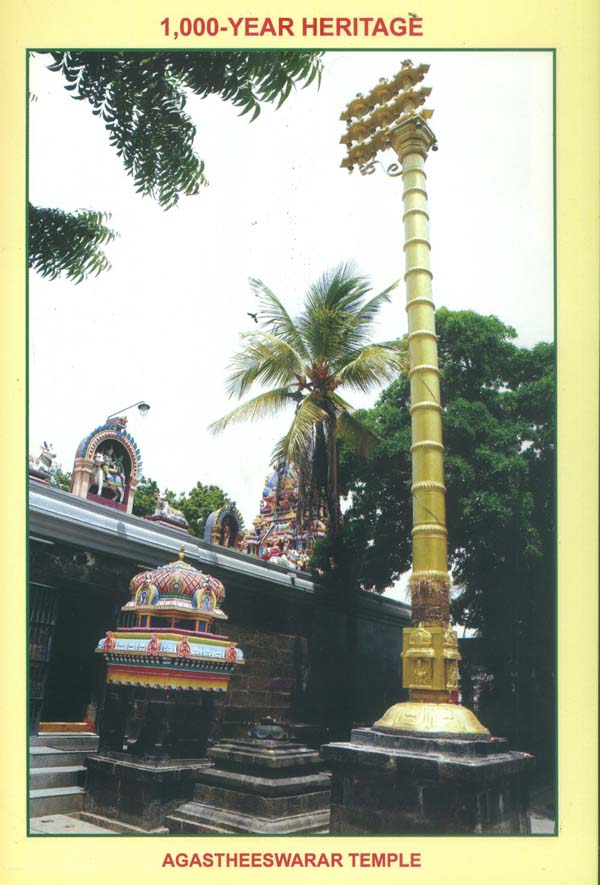