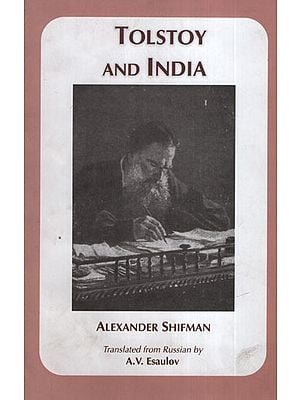 Leo Tolstoy (Count Lev Nikolayevich Tolstoy, 1828 -1910) regarded as one of the greatest authors of all time, was born in an aristocratic Russian family and is best known for his novels War and Peace (1869) and Anna Karenina (1877), often cited as the pinnacle of realist fiction. Tolstoy's fiction includes dozens of short stories and several novellas such as The Death of Ivan Ilyich, Family Happiness, and Hadji Murad. He also wrote plays and numerous philosophical essays.

Tolstoy and India by Alexander Shifman was first published on the occasion of the Gandhi centenary in 1969. It is a comprehensive and valuable survey of Tolstoy's lifelong interest in India, and its philosophical and religious thoughts and traditions, his passionate concern for the freedom and welfare of the Indian people and his contacts with many distinguished Indians and in particular with Mahatma Gandhi.

Alexander Shifman (1907-1993), was a distinguished scholar and an advisor to the Tolstoy State Museum. In his book Tolstoy and India, he writes, "During the last decade of Tolstoy's life, Ramakrishna and his pupil Vivekananda occupied his thoughts...", and "On 13 February 1903, Tolstoy read the journal Theosophischer Wegweister, sent to him from Germany and in his copy underlined a number of Ramakrishna's aphorisms. 'There is much in common with my conception'- he noted in his diary. The material used in this book is based on authentic records available in the archives of the Tolstoy State Museum.

This book has been translated from Russian by A. V. Esaulov.

In his Famous essay Asia's Reply to Tolstoy Romain Rolland wrote: "The young Indian Gandhi received from Tolstoy's hands that ever-burning light which the old Russian apostle cultivated in his soul, warmed with his love, fostered in his sorrow, and out of it he made the torch that illuminated India. Reflections of this light reached every part of the world."

Indeed, India is a country in which Tolstoy's artistic inheritance and humanistic thought ar particularly loved. This is why the decision of the Sahitya Akademi to publish my book Tolstoy and India for the general Indian reader gives me great pleasure. This book is a part of my extensive research work, Tolstoy and the East, published in the USSR which show the immense interest of the Russian writer in the peoples of Asia and Africa, and analyses his relationships with the artists and writers of these countries and the publication of his correspondence with them.

I heartily thank the translator and the Sahitya Akademi for their work and interest connected with the translation and publication of my book. 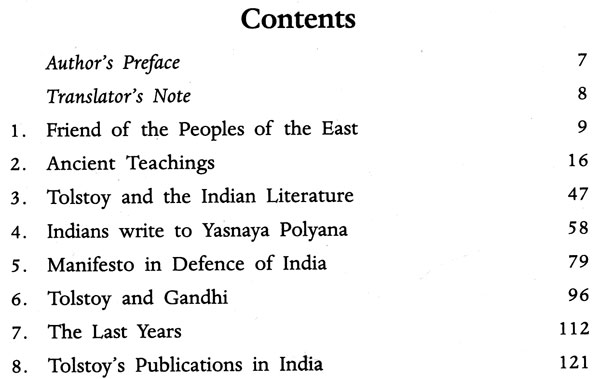 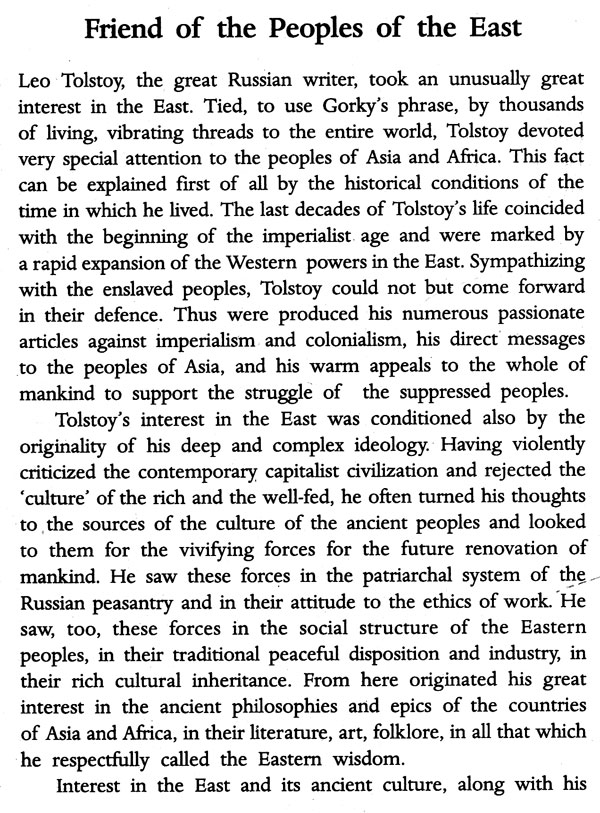 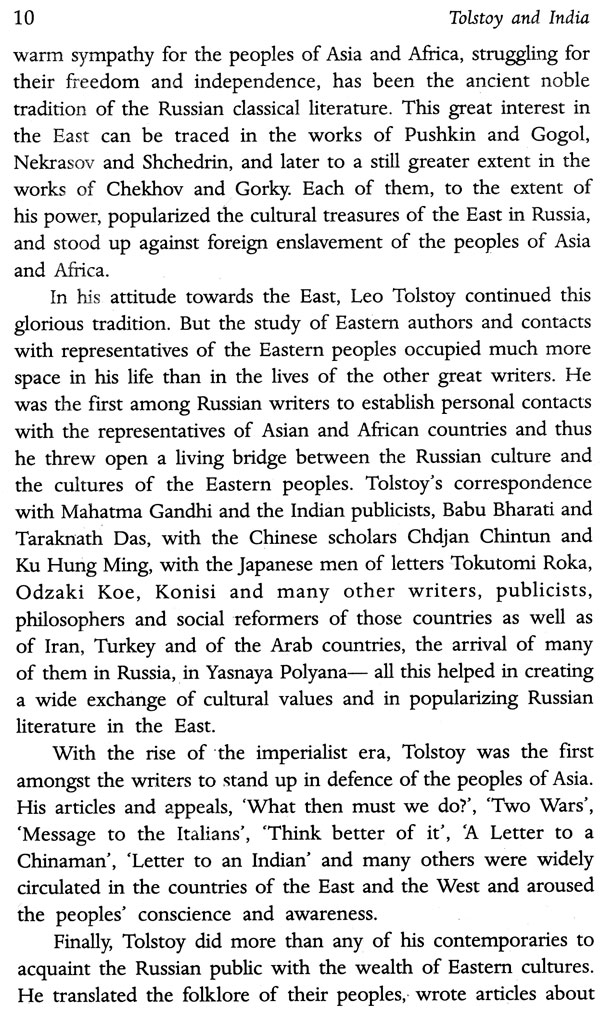 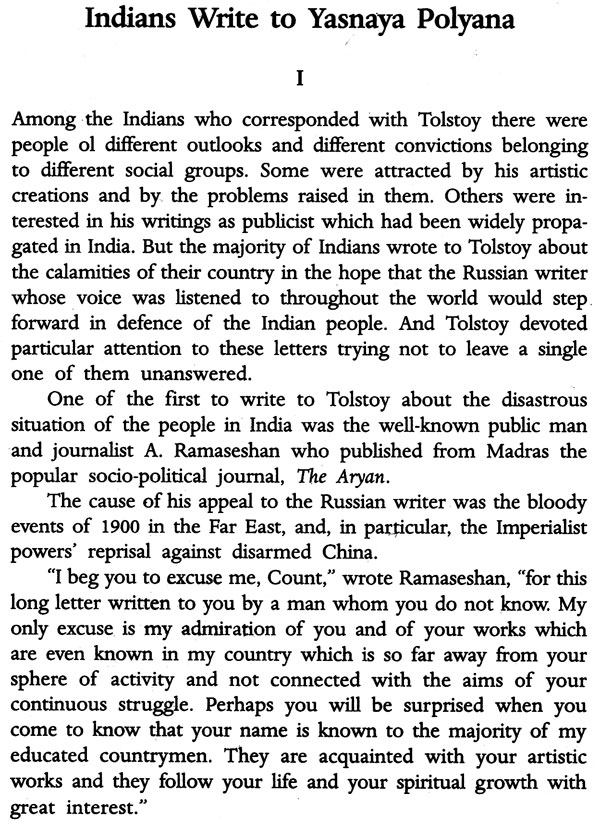 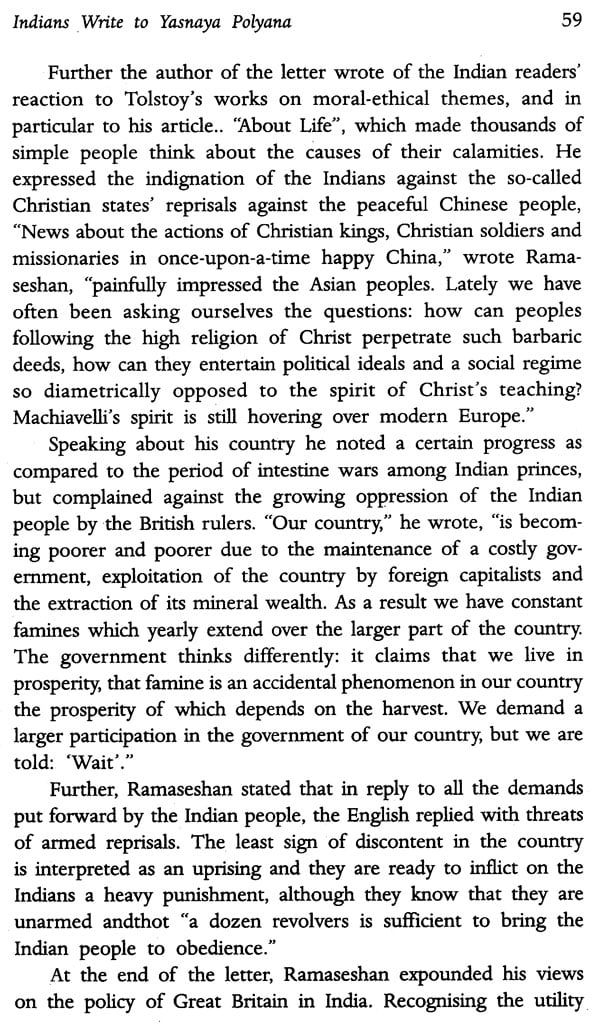 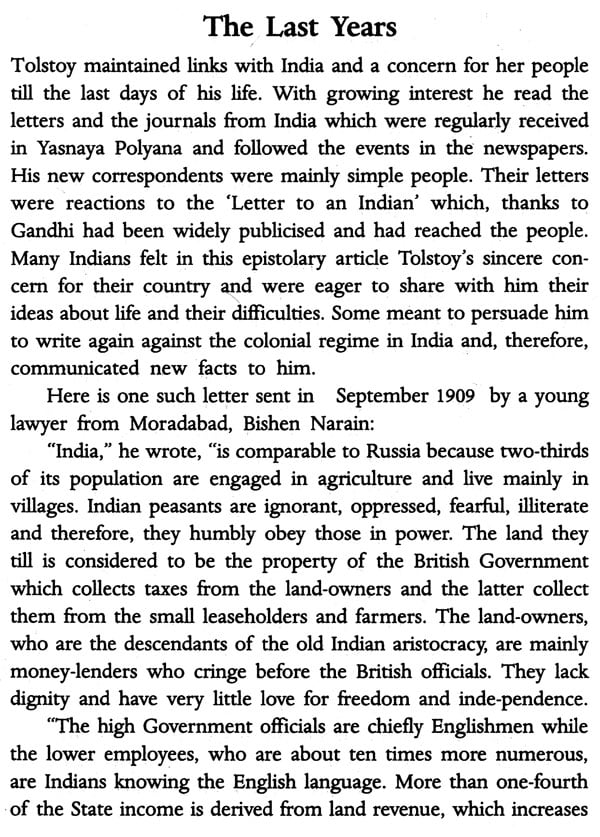 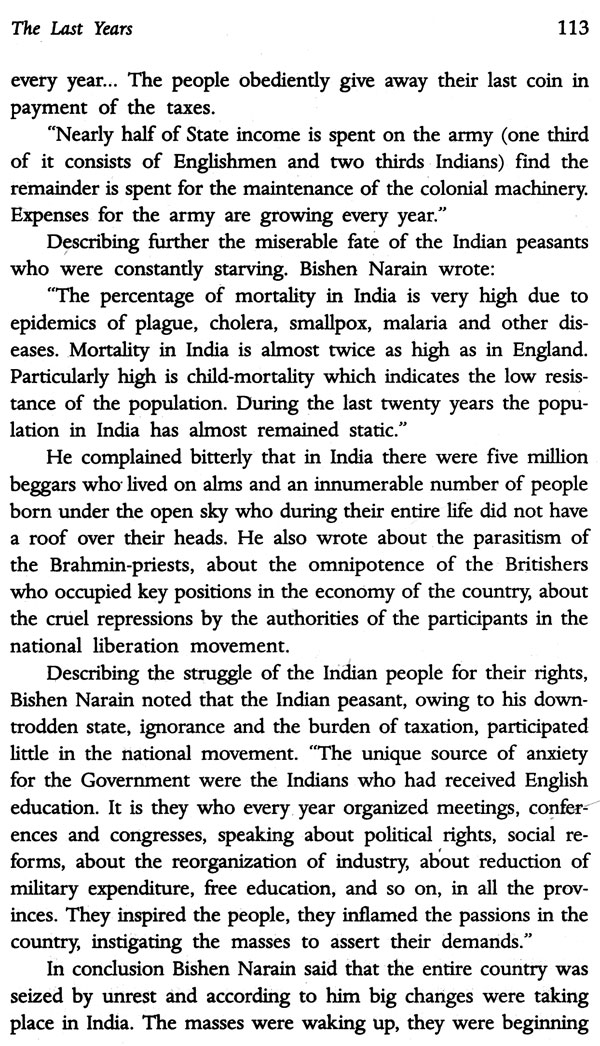