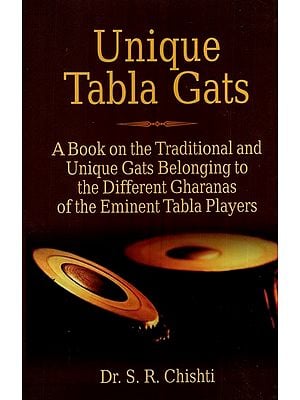 This book deals with the importance and necessity of the Gats in present time. For long, these have been overlooked and soon they are going to get extinct. Therefore, the writer, through his book, has attempted to revive the culture of practicing the Tabla with the traditional Gats of various gharanas.

There has been a considerable change in the interests of students when it comes to playing the Tabla. Youth of today like to practice the rela instead of traditional gats, gat qaide, gat paran, gat tukda or farmaishi bandish so as to get faint praise as soon as possible. They are not worried about traditional compositions. Hence, they do not try to learn the basics of the Tabla. One should remember that just riyaz (practice) is not sufficient. A player should possess the in-depth knowledge of the nuances of the Tabla. It is essential for a Tabla player to learn ample number of gats from a reputed Ustad for a long period to acquire a complete knowledge of the art of playing the Tabla. Finer aspects like the correct way of producing distinct boles, deeper understanding of all six gharanas along with an absolute authority over laya and laykari are a must for a Tabla player. Needless to say, the utmost respect for the Ustad goes hand in hand with all the theory and practice.

It is a sad state of affairs that the culture of practicing old gats is declining rapidly. With a decrease in the number of reputed Ustads, it is imperative for the young generation to revive the culture of practicing Gats before they are lost forever from the face of this earth. Many Gats have already died out and hence, it is indispensable to preserve the remaining gats lest they are extinct forever.

This book aims at preserving the collection of the gats which have been compiled by the author from various sources. Some of the gats, in this book are extremely rare and they have been procured through direct contacts with legendary Tabla Maestros like Khalifa Ustad Afaq Husain Khan, Ustad Ilmas Husain Khan and Professor Girish Chandra Srivastava etc.

He was inspired to play the Tabla by his father Mr. W.R. Chishti who was a Violinist and music director in his hometown, Faizabad. After sometime, Dr. Chishti was taken as a disciple by Pt. Bansi Lal who was trained by Khalifa Ustad Wajid Husain Khain (Lucknow Gharana). Later on, the author was trained by Acharya Girish Chandra Srivastava (Allahabad). Finally, his training was completed under the discipleship of Khalifa Ustad Afaq Husain Khan of Lucknow Gharana.

The author has accompanied on the Tabla with several leading artists in India He has also performed for SPIC- MACAY. His first performance was in the program Phulwari in Lucknow Doordarshan Kendra in 1978. He was honoured by renowned Pakhawaj player, Swami Ramshankar Pagaldas for his performance at Begum Akhtar Sangeet Samaroh in Ayodhya in 1979. He is a regular B-High grade artist of All India Radio (AIR) at Agra, since 1995. He has been an examiner in Prayag Sangeet Samiti and other Universities. He has been called as a Music Expert for the selection of teachers at Navodaya Vidyala. He has judged in several competitions in the country.

Served as the Tabla Player in Raja Mohan Girls PG College in Faizabad (UP) and as a music teacher in Navodaya Vidyalaya, Doda (Jammu & Kashmir) for a period of six years. Presently, the author is working as the Tabla Instructor at Cultural Education Center, Aligarh Muslim University, Aligarh since 1992.

I feel elated to present my sixth book, Unique Tabla Gats which is the one and only of its kind. As the title suggests, it is about the Gats which are an important aspect of practicing the Tabla. This work contains the description of the various types of Gats along with the division of the Gharanas.

The first chapter contains the shijra (genealogical trees) of the six gharanas. It further gives a brief account of the Khalifas who belong to these different gharanas of the Tabla. The next chapter that is the second one consists of the definition of the gats and their types. In addition to this, the chapter also narrates the interesting stories behind the composition of these gats. There are 65 examples of different types of gats which have been arduously collected from various authentic sources by me. The third chapter of this book consists of 107 examples of gats which belong to the various Ustads of the six gharanas of the tabla. The following chapter four is about various popular and noteworthy thekas in a variety of taals. This chapter provides 9 astonishing thekas out of which 5 have been composed by me. There are 100 examples of thekas in this chapter. Finally, the last chapter is about Naghma (lehra). It consists of 16 Naghmas in 16 different ragas and taals.

The aim of my books including this one is to target the untouched topics so that it benefits a large number of people who are doing researches as well as trying to excel in their art of playing the tabla. My very first book Fan-e-Tabla (2011) remains the only tabla book to have been published in Urdu language in India since the publication of Risala-e-Tabla Nawazi. This book was by Ustad Mohd. Ishaq Khan which was published more than a century ago in 1906. The other works that I have undertaken include Tabla Sanchayan (2012), Table Mein Das Ankon Ka Mahatva (2013), Bhartiya Talon Mein Theke ke Vibhin Swaroop (2014) all in Hindi language. Besides these, the book titled, Compositions of the Great Tabla Maestros (2016) and the current book, Unique Tabla Gats, both are in English Language.

I hope and believe that the efforts I have put in this book will help the researchers, teachers, Tabla players and their disciples to hone their skills to the highest level. I beg pardon from the readers for any inadvertent errors which might have occurred due to the technical limitations and difficulties. I wholeheartedly welcome any ideas and suggestions regarding my work. These shall be incorporated in the next edition of the book. 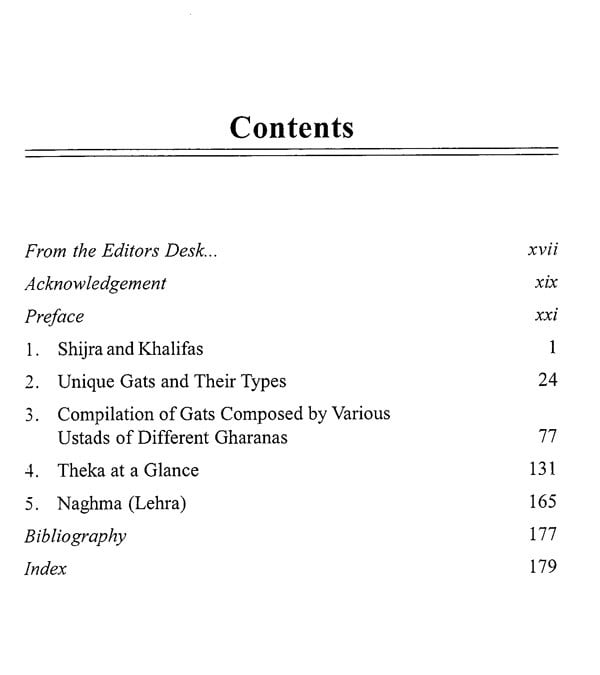 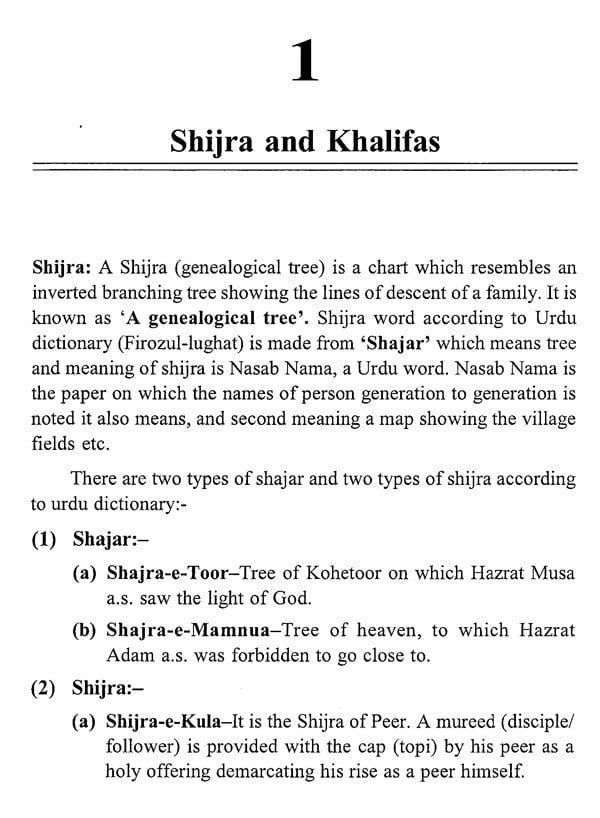 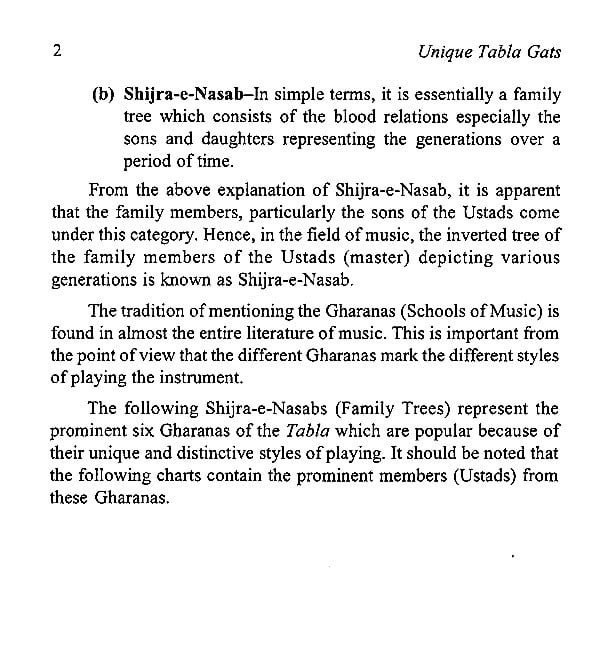 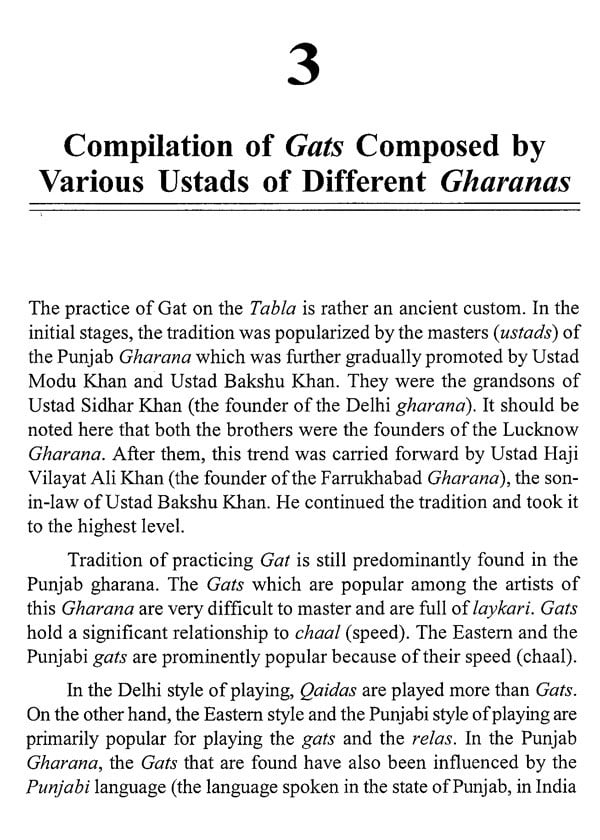 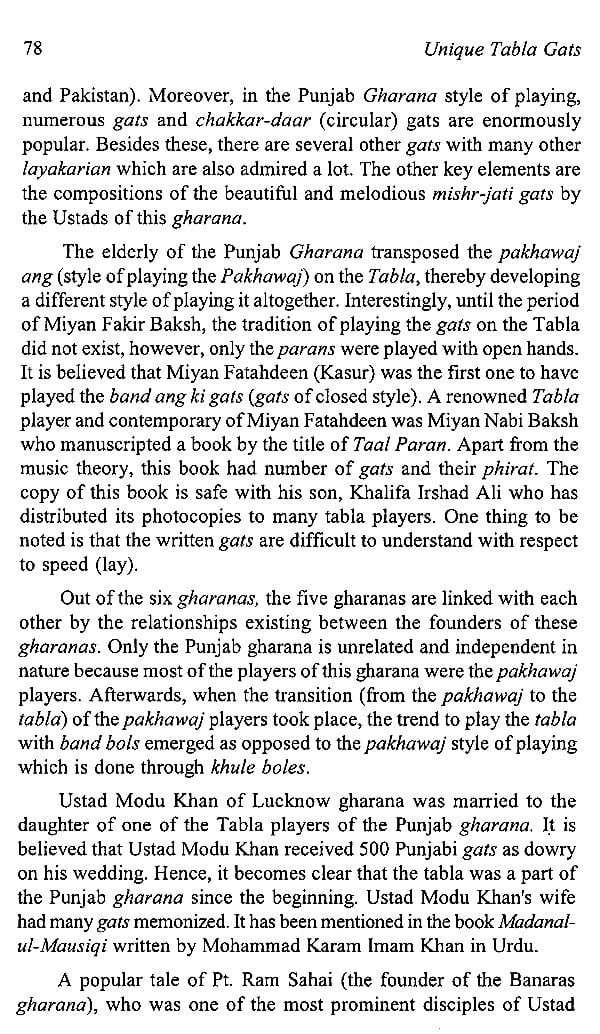 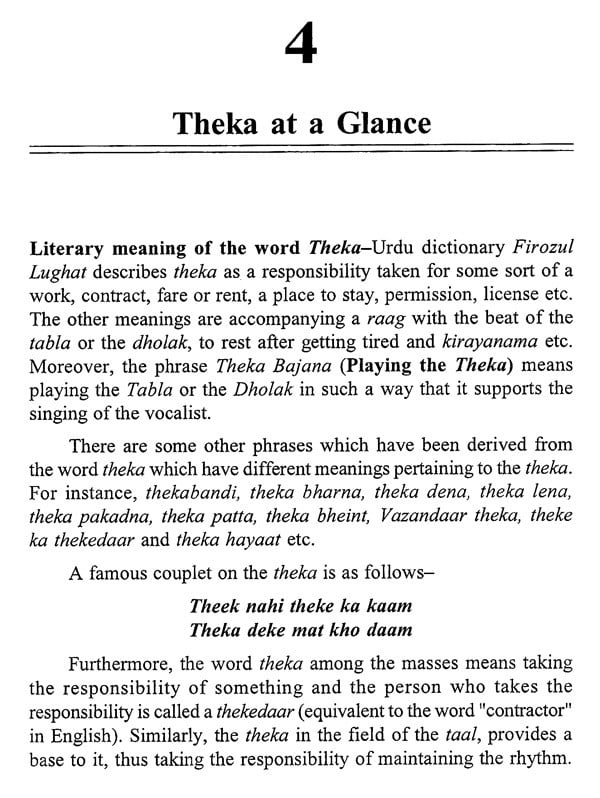 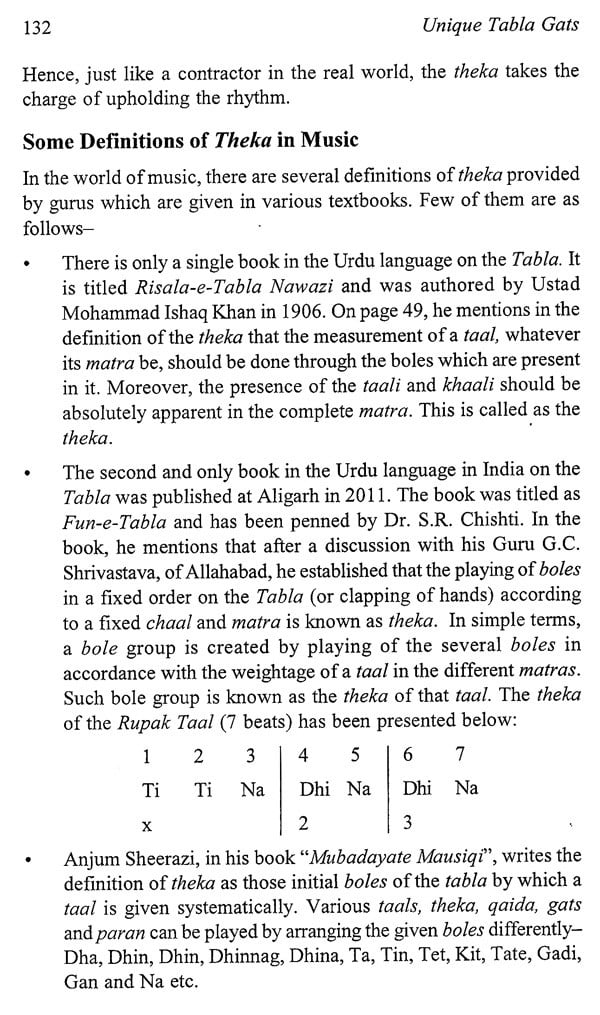