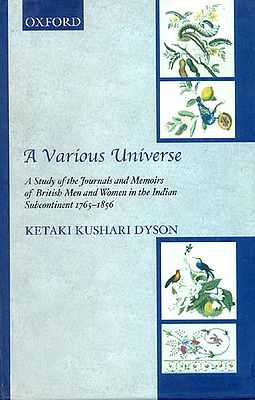 €35.27
Usually ships in 15 days
Notify me when this item is available
Save to Wishlist Send as E-card Share by Email
About the Book:

First published by OUP in 1978, this is a pioneering study of a fascinating field of English letters, the books written by British men and women about their experiences in the Indian subcontinent in the second half of the eighteenth and the first half of the nineteenth centuries - a part of th great surge of the literature of travel and foreign experience which accompanied the commercial and political expansion of the British people. Over forty individual works are surveyed, illustrating a substantial corpus that reaches the status of a genre.

The panorama of the subcontinent unfolding under the scrutiny of intelligent observers, the wealth of information on every aspect of Indian life, the memorable East-West cultural encounter, the extraordinary nature of many of the adventures and confrontations recorded: all provide exciting material which is every bit as educative and thought-provoking now as it was when the book first appeared.

Generous excerpts from the original texts are balanced against the author's own exegeses, offering rich insights to lay readers as well as to literary people, historians, and anthropologists.

The new preface to this edition gives the reader a glimpse into what the writing of this book has meant to Dyson in her own subsequent literary career, and encourages us to re-think some of the much-debated issues of recent intellectual discourses on cultural encounters between the West and non-West.

Ketaki Kushari Dyson has published many titles in Bengali and English, covering genres from poetry, fiction, drama, and essays to literary translation and research-based books. She received the Ananda Puraskar twice (1986 and 1997), the Bhubanmohini Dasi Medal of the University of Calcutta for her contribution to Bengali letters (1986), and the Recommendation of London's Poetry Book Society for her translations of Tagore's poetry (1991).

'This fine addition to our general knowledge of India ought to be in every South Asia and British Empire collection.'

'This evocation of a time when the old India was vanishing and the new British India was emerging is delineated with subtlety and imagination. "Only connect", urged E.M. Forster: Ketaki Dyson does connect.'

'Besides the intellectual profit to be gained from this book, there is even more the pleasure to be anticipated from being guided by a sensitive and studious woman whose writing mirrors the best qualities of the subjects of her study.'

'[a]formidable inquiry. One rises after reading this massive book grateful to its author for taking up and executing a difficult but necessary project in literary and historical research.'

'The author's scholarship is impressive.'

'Dr. Dyson has triumphantly vindicated her claim that the journals of the British in India deserve to be regarded as a distinct genre .'

PREFACE TO THE 1978 EDITION