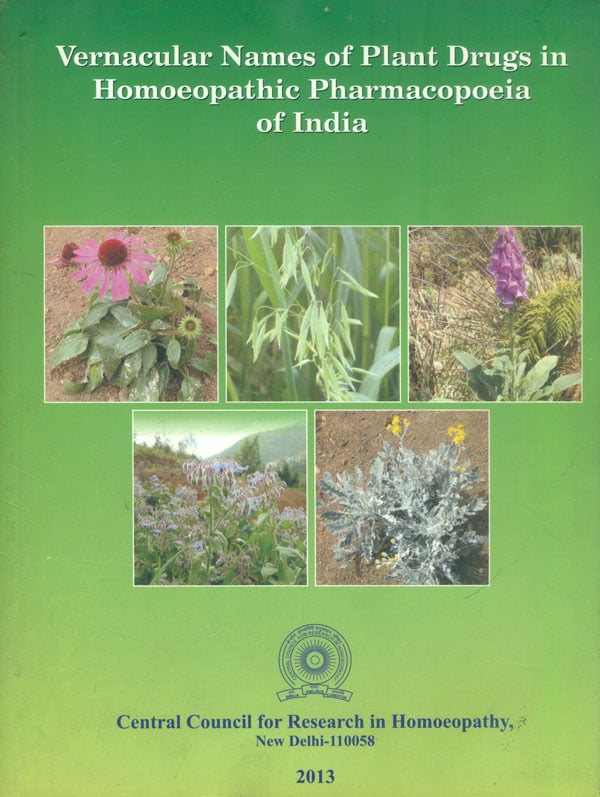 There has been a long felt need for appending the vernacular names of plants used medicinally in Homoeopathy as listed in the various volumes of the Homoeopathic Pharmacopoeia of India (HPI), as a seperate appendix. Accordingly a compilation has been made of the plants in the official languages of India as listed in the 8th Schedule of the Indian Constitution (2007), incorporating the 92nd Constitutional amendment (2003). The official languages of India as per the above schedule (in alphabetical order) are:

In a large country like India where diverse languages are spoken regionally, the necessity of including the names of Homoeopathic medicinal plants in as many different languages possible would be of immense utilitarian value, for fixing the probable identity of the plant, better understanding of the usage of the plant, easy procurement and ascertaining its availability in various local markets throughout the length and breadth of the country.

There seems to be a relationship between availability of resources and associated knowledge of a plant when more names of the plant are found to be in vogue in a particular language. The relationship between language and knowledge on biodiversity has been well documented. Language is the medium, where knowledge is stored, retrieved and transmitted. Local names often indicate the patterns of knowledge flow.

An analysis of the entries of common and vernacular names would show that plants which are indigenous to the Indian subcontinent and adjacent regions have a large number of entries under diverse languages. This can be contrasted with the exotics almost exclusively of the European or American continents which have names listed only in English and / or their local language, with no entries in any of the Indian regional languages whatsoever. Longer the utility ofthe plant in a community, the more the possibility of a name of the plant becoming entrenched in the local language and vice versa.

Many of the medicinal plants useful in Ayurveda, Siddha and Unani have a significantly higher number of names in Sanskrit, Tamil and Urdu than with other languages. This is more due to their wider application, usage in these respective systems of medicine, occurrence throughout the country and reflects the knowledge of medicinal value applicable in day to day life, both with the learned class and the common man.

In the present work, the drug names are given first followed by the valid botanical names and their synonyms if any are given next followed by the various names in regional languages which are well documented in the literature. Plants not found mention in some of the languages may be due to non availability of the plant in that region or lack of documentation in that local nomenclature or its non-occurrence in that part of the Indian sub-continent.

It is hoped this appendix would increase the utility value not only of the Homoeopathic Pharmacopoeia of India but would contribute to the overall knowledge data base of the Homoeopathic medicinal plants in the understanding and availability of these raw materials from various diverse sources, linked regionally. 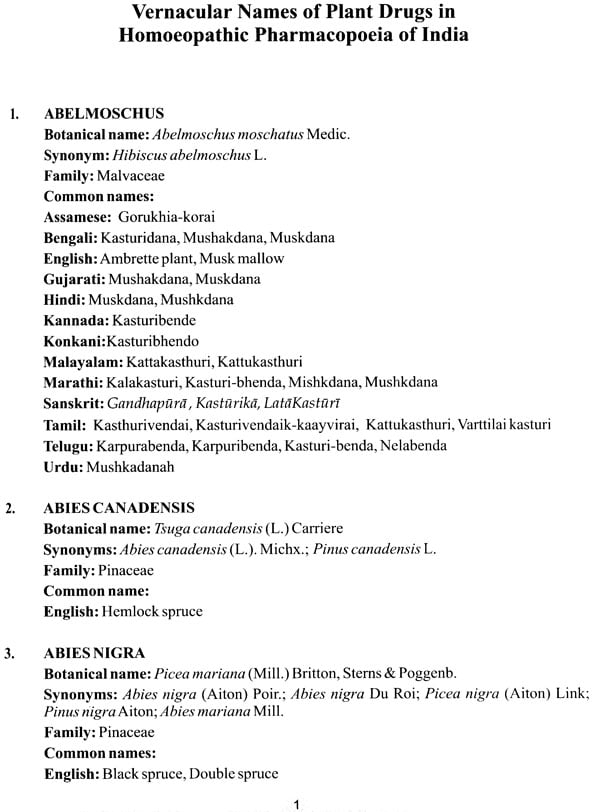 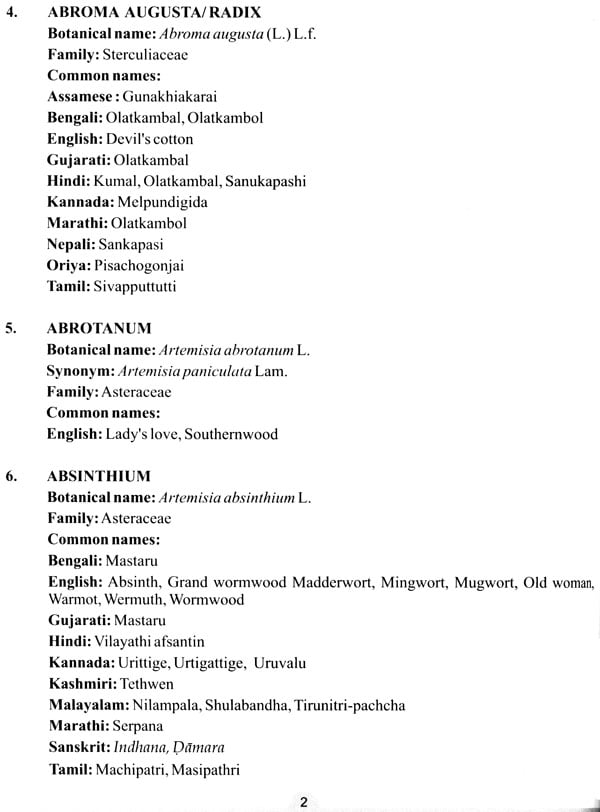 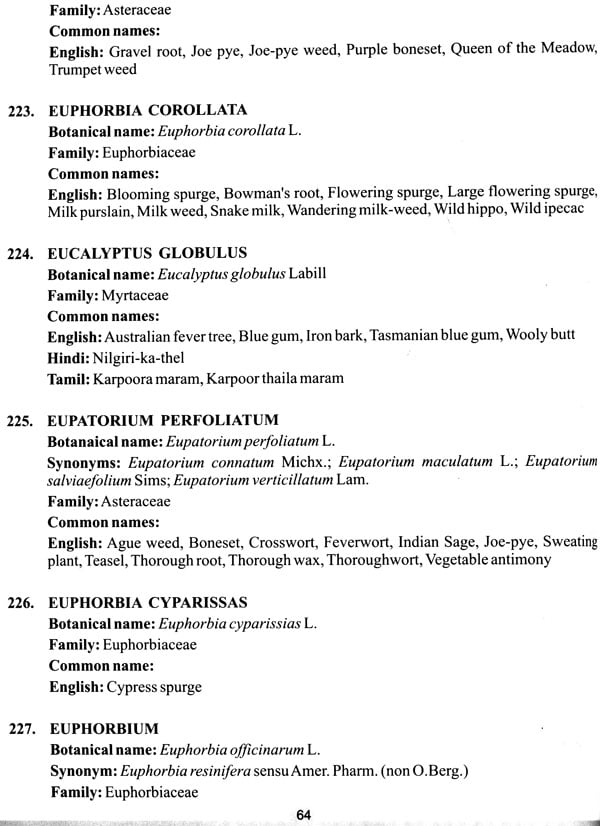 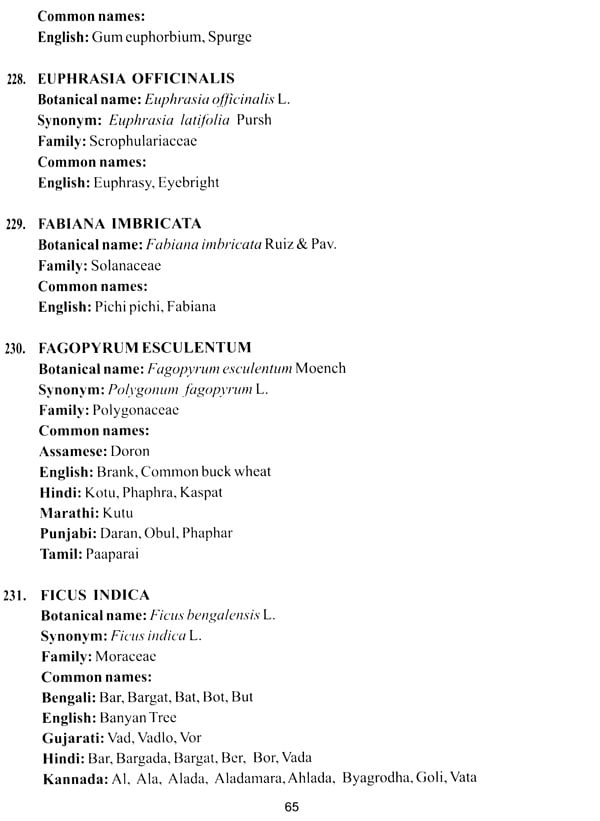 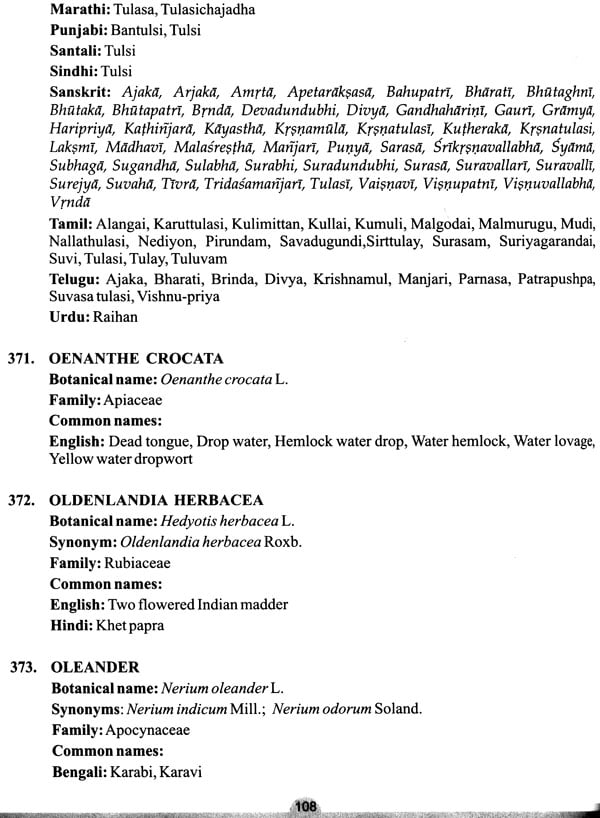 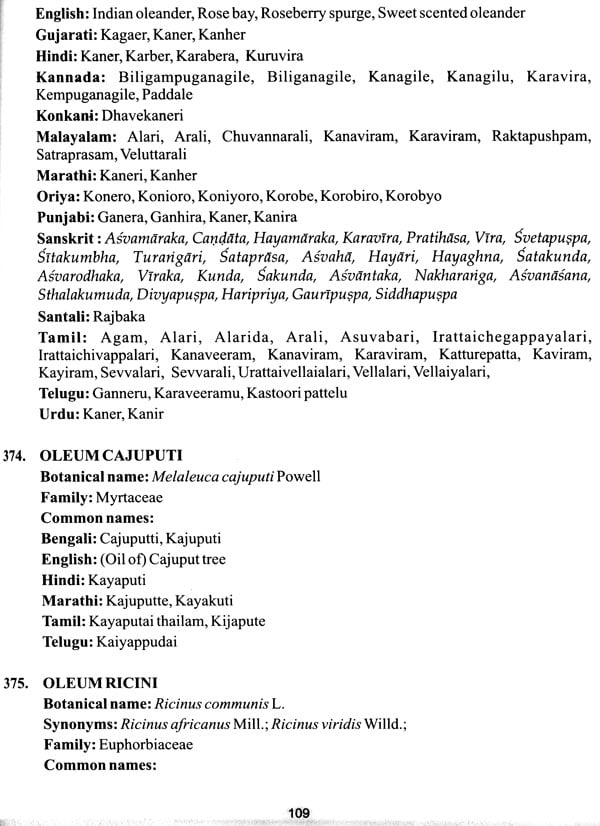