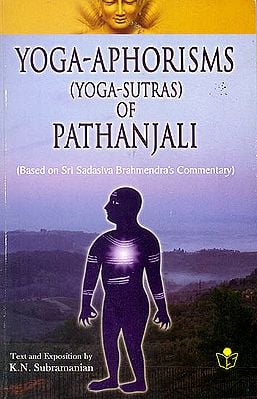 £6.00
Usually ships in 15 days
Notify me when this item is available
Save to Wishlist Send as E-card Share by Email
About the Author

Sri K.N.Subramaniam who was initiated into spiritual discipline by Sadguru Sri Gnananandagiri, Thapovanam and who pursued vedantic study and sadana under the sage’s guidance is a staunch believer in the uniqueness of the Vedantic Tradition associated with Vasishta, Dattatreya, Gaudapada and Shankara. In his writings and talks he stresses that the advaitic sadana as contained in traditional works and as preserved by traditional seers, alone can lead to true advaitic experience envisaged by the Upanishads.

I am most delighted to be invited to write a ‘Foreword’ to the brilliant exposition of Sri Patanjali’s Yoga Sutras by my esteemed and learned friend Brahamsri K.N. Subramanian. This is a most unexpected honour for a person like me, especially when it is a question of commending the work of a most devout sadhak who spends his time in austere sadhana at the great Tapovanam of Jagadguru Sri Gnanananda Swamigal. Tapovanam has a band of not merely of devout sadhaks and upasakas but of dedicated and learned scholars who spend the time they spare from the tapas to edit and publish Vedanta classics.

Brahmasri Subramanian’s dedication to the propagation of Vedanta Classics is a well-known fact. He has brought out a fine exposition of ‘Yoga Vasishta.’ He has also given us an account of Advaita in relation to yoga Vasishta. In the Wisdom of Dattatreya’, he has given us substance of the esoteric work Tripura Upanished. He has a Pamphlet on the Bhagavad Gita in the light of Yoga Vaishta. The book we now from him is a classical test of the Yoga Darsana of Patanjali. Acharya Patanjali is the key figure in this Yoga Darsana School of Indian Philosophy, one of the famous six darasanas our seers have vouchsafed to us our spiritual illumination and growth.

This famous text of Yoga Darsana has attracted scholarly attention from many devout and dedicated students of classical Indian thought. In essence it affirms that restraint and control of mind, the monkey is the essence of true yoga. The mind can make a heaven even of hell and a hell of even heaven.

The earliest and most fundamentally illuminating commentary on the Yoga Sutras in the Yoga Sudhakara of the great Jnani-Yogi and Brahmavadin, the great avadhuta sanyasin Sri Sadasiva Brahmendra Swamigal. Sri Sadasivendra, a master yogin himself was a most illuminating expositor. His Atmavidya Vilasam, ‘Siva Manasika Puja’ and the wonderful Kirtanas he composed which have earned such enthusiastic reception not merely from scholars but from musicologists, are a fine testimony to the sheer power and dynamism of a most remarkable mind. Sri Sadasiva Brahmendra reveled in Jnanayoga all his life and his body seemed to have been utterly accustomed to being regarded as an irrelevance.

Other expositions of the work which may be mentioned are Rt.Hon. Max Muller’s Six Systems of Indian Philosophy’, Dr. Ganganath Jha’s edition of ‘The Yoga Sutras’ an English Translation entitled how to know God purported to be the exposition of ‘Patanjali’s Yoga Sutras’. Brahmasri Subramaniam’s exposition is a most valuable and welcome addition. Sri Subramanian brings a wide range of scholarship in Vedanta to his self chosen task. I venture to think that his book will being fresh illumination to the great work of Sri Patanjali.

I hereby commend the book to all who cherish our Vedanta heritage and in Particular to those who value and cherish our Yoga Darsana.

The Yoga-System of Pathanjali aims at emancipation from Samsara, called Kaivalyam. But the system is of immense practical value even to persons who pursue lesser goals like worldly success, mental peace, acquisition of extra-ordinary powers etc. Pathanjali’s analysis of mind and consciousness is unexceptionable so far as it goes. That is the reason for persons following Karma Yoga, Bhakti Yoga and Jnana Yoga suitably combing yoga technique with their main disciplines. But its unique value is still to be grasped by modern intellectuals.

The present work is a concise exposition of the fundamental principles of the system and is largely based on Sri Sadasiva Brahmendra’s elegant commentary YOGA-SUDHAKARA. Friends, who read the work on my request, complained to me of their difficulty in comprehending certain yogic concepts. Their experience is understandable. Many aspirants keep away from yoga Sutras on account of this reason. The hardship will be experienced only at the stage. If the readers persist, they will find Pathanjali and Vyasa, who are no ordinary men making the task of understanding less difficult. Yogartho Yogenaiva jnatavyah is a saying quoted by yoga-followers. Yogic concepts should be understood through practice of yoga and reflection. Elaborate explanation at verbal level does not help. This small publication is brought out for the reason that the seekers should get acquainted at least with the whole text of Pathanjali’s aphorisms. That itself will bring about a great difference in their understanding.

I sincerely thank friends, Sri R. Ganesh, Sri A.K. Subramanian, Sri V. Anantanarayanan and Sri Om Shekarananda who have helped me in several says as in the case of earlier publications of the author.

Pathanjali, as founder of the Yoga School of Philosophy and author of the Yoga Sutras has a honoured place among the great teachers of india. In the traditional view, he has contributed to the discipline and refinement of body, mind and speech through works on Ayurveda, Yoga and Sanskrit Vyakarana and so is held in great esteem. Whether the Mahabhshya on Panini’s Sutras and the yoga sutras were composed by the some Pathanjali is debated by some scholars, but the view of the traditional scholars is that the same author wrote both of them and that he might have been a contemporary of Vyasa and that he might have lived towards the end of Dvapara Yuga, Before the commencement of Kali Yuga.

Sankhya and Yoga schools go together as their fundamental tenets are broadly the same. Both the schools accept that Purusha is pure chit, consciousness and that Pradhanam, the primordial matter is independent and is the cause of the universe. Though independent, Pradhanam or Prakriti exists only for the purpose of providing bhoga, enjoyment and apavarga, liberation to the Purusha. Again, the Purusha-s-are endless in number. Since Pradhanam is the cause of the universe, there is no need to posit a God for creation of the universe. But, here, Pathanjali deffers from the traditional Sankhya school and affirms the existence of ishwara, god who is eternally liberated and who is engaged from the commencement of creation in emancipating the distressed souls from bondage.

Though Shankara has refuted the Sankhyan tenets as unvedic and also as not retional, shankara and post-shankarite scholars of Advaitic school have been favourably disposed towards the Yoga – school. At the doctrinal level, they do not subscribe to the yoga – viewpoints but Pathanjali’s analysis of mind and techniques relating to the practice of Samadhi have been generally accepted and followed by them Shankara’s own remarks in the Sutra Bashya give a tacit consent to the trend. Vasishta says that there are two modes for the attainment of liberation, yoga and jnana and both have been taught by Shiva Madhusudhana Saraswati, Quoting the verse of Vasishta explains the rationale behind the two approaches in his commentary Gudartha Dipika on Bhagawad Gita.

Apart from Vyasa’s Bashya on the Yoga Sutras, which is invariably followed by all later commentators, there are commentaries by the well-known Advaitic scholars Vachaspati Misra, Narayana Tirtha and Sadasiva Brahmendra Vidyaranaya has given the gist of yoga teachings in his Jivanmuktiviveka and has also pointed out how, through Asamprajnatha Samadhi alone, without the aid of Vedanta/Vichara, the Realisation of Truth is not attained. A recent scholar Bellamkonda Rama Raya also upholds the same view.

The first formulator of the Yoga teachings, according to Yajnavalkya, is Hiranyagarbha who taught Yoga, which is the means to Samyak darshanam, perfect knowlwdge. Pathanjali following Hiranyagarbha, only re-codified the teachings and hence has termed his work as ‘Anu-sasanam’, a secondary exposition. Be that as it may, Pathanjali’s aphorisms have been regarded as highly authoritative by traditional scholars and the cogent and comprehensive treatment of the entire subject in less than 200 sutras has immensely benefitted the seekers.

A complete understanding of Pathanjali and Vyasa will bring about better appreciation of the nature of subjective consciousness and the entire objective matter and the interrelationship between the two paving way for greater metal health and spiritual harmony among the people.

The Science of Self- Realization: A Guide to Spiritual Practice in the Kriya Yoga Traditon (Patanjali’s Yoga-Sutras
By Roy Eugene Davis
£21.75

The Wisdom of Patanjali’s Yoga Sutras
By Ravi Ravindra
£32.25

A Re-Appraisal of Patanjali's Yoga-Sutras (In the Light of the Buddha's Teaching)
Publisher Vipassana Research Institute
£12.00

Patanjali's Yoga Sutras With the Commentary of Vyasa and the Gloss of Vachaspati Misra, and an Intro. by Srisa Chandra Vasu
By Trans by. Rama Prasada
£26.25 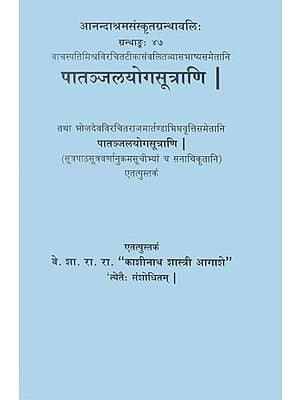 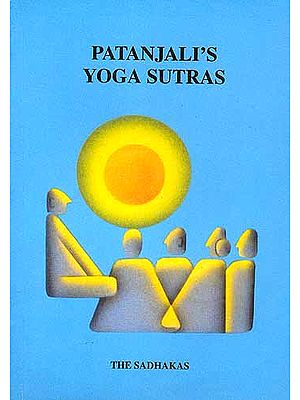 Yoga a New Direction - Yoga: The Science of the Soul (Commentaries on the Yoga Sutras of Patanjali)
By Osho
£27.00

The Path of Yoga: Discovering the Essence and origin of Yoga (The Yoga Sutras of Patanjali)
By osho
£23.25