The Court of Solomon, the Legendary King of Israel 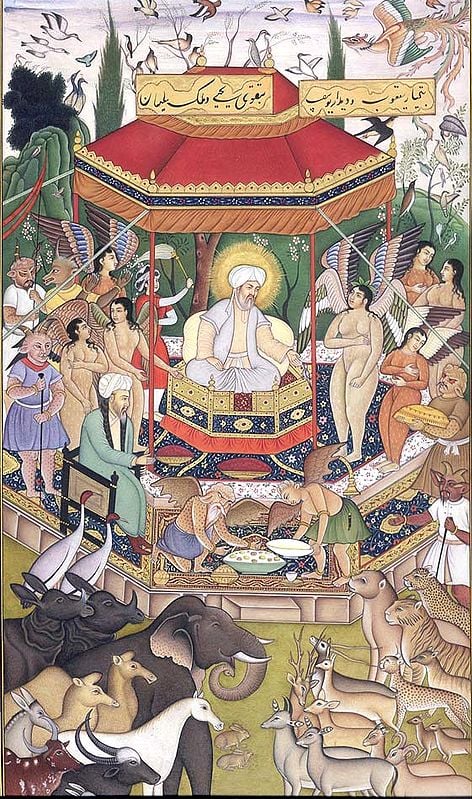 $1675.00
This item can be backordered
Time required to recreate this artwork
12 to 16 weeks
Advance to be paid now
$335.00 (20%)
Balance to be paid once product is ready
$1340.00
Notify me when this item is available
Save to Wishlist Send as E-card Share by Email
The words, inscribed above the canopy, 'He is truly great, for the he is Joseph in beauty of appearance, Jacob in sympathy, John in piety and Solomon in the command of his dominions', suggest that the person depicted in this miniature is someone who veritably combines in him attributes of all the four legendary figures of Jewish world. In Islamic tradition, Joseph, Jacob, John and Solomon are celebrated as Yusuf, Yaqub, Yahya and Sulaiman. This painting, however, is not the rendition of a fifth one as suggests the above couplet. The artist, while inscribing on the top side of the painting this piece of a broken couplet lauding all four, has picked out of them just Solomon who is associated with the fable of the highest kind of kingship, unique prowess, exceptional wisdom, incomparable sense of justice and exemplary piety. He is said to have been the wisest of the born ones.

The artist has obviously depicted the legendary Solomon, the Jewish king of Israel and a personage of Biblical mythology. He is the hero of hundreds of legends related to both, his illustrious deeds and sensuous infatuations. His significance in Christian mythology may be ascertained from the fact that the Bible ascribes three of its books- Proverbs, Song of Songs and Ecclesiastes, directly to Solomon. Wisdom personified itself in him and justice prevailed in each of his words. Mythology assigns to Solomon's command dominions of man, animals and nature and worlds underneath and above. He controlled winds and all elements of nature and jinns, devs, fairies, demons and all supernatural and sub divine things. Solomon spoke to all, man and animals and creatures of supernatural domains, in their language for Solomon could speak all such languages. This shape of Solomon-legend had ample scope for artist's imagination to expand and innovate and, hence, out of the above four mythological figures he picked Solomon for the theme of this miniature.

For symbolically depicting the domains under his command, the artist has painted Solomon, seated centrally on a hexagonal throne placed on a hexagonal parapet, surrounded by different kinds of beings, both natural and supernatural, mythical and human, men and animals and birds and winds. Solomon's brilliant gold halo defines his divine magnificence. Ordinarily fierce and awful looking horned demons are in his court in absolute subjugation. They are engaged in rendering various services, carrying trays of food and gifts like humble court attendants. Fairies of different species attend his court with their wings raised above, which fully expose their figures to eyes. Their nudeness indirectly depicts Solomon's weakness for the opposite sex, which was one of the two weaknesses he suffered from. The other was his passion for horses, particularly Egyptian horses.

As the mythological tradition has it, Solomon disobeyed two of the Great Commandments on account of these two of his weaknesses and consequently he and Israel suffered for it later. One of them commanded kings not to have many wives and the other not to have Egyptian horses in their possession, or rather not to ever tend towards Egypt. Solomon violated both. He has many wives and his stable was packed with a large range of finest Egyptian horses. He had fourteen hundred horses and twelve thousand horsemen. Despite that he had many wives, he married Pharaoh's daughter Bithiah.

Solomon had built at Jerusalem a magnificent temple. The day of its opening fell next to his wedding night with Bithiah. He loved Bithiah more than he collectively loved all his wives. For her wedding night, Bithiah got her bed covered with a black canopy embroidered with diamonds and pearls glittering like the stars in the sky. The night passed and sun rose, but Solomon, lying under this canopy, thought it was still the night and kept lay in Bithiah's embrace. The keys of the temple he had under his pillow and hence the temple could not be opened as scheduled. Besides, he held his marriage ceremony more splendidly than the ceremony of temple opening. This annoyed God, Who resolving to destroy the temple-building, sent angel Gabriel down to earth. Gabriel struck a reed in the Mediterranean sea, which congealing around it a huge mass of silt gave birth to the city of Rome and the Roman legions later set fire to this temple and destroyed it.

The superbly rendered miniature revives the artistic grandeur of Akbar's atelier where a similar masterpiece was created acclaimedly by Madhu Khanazad. With the fine strokes of his brush and by re-creating what Akbar's court artist created some five hundred years ago, the artist Kailash Raj transports his viewers to Akbar's era and to his world of great art. Solomon has been painted seated with his legs crossed, exactly as Akbar is seen seated on his throne in many of his contemporary paintings. This is one of the reasons that scholars claim that the medieval counterpart of this paintings, as also this one, is only a symbolic depiction of Akbar who wielded as great influence as did Solomon. Animal figures are not only superbly but also judiciously rendered. For depicting his skill each specie of animals, except the elephant, horse and a few birds, has been painted in both genders, the male and female, obviously for defining their generic distinction. The judicious use of gold gives the painting its distinction and glow. By whatever parameter, it is a magnificent work of art.