The Enlightenment of Buddha 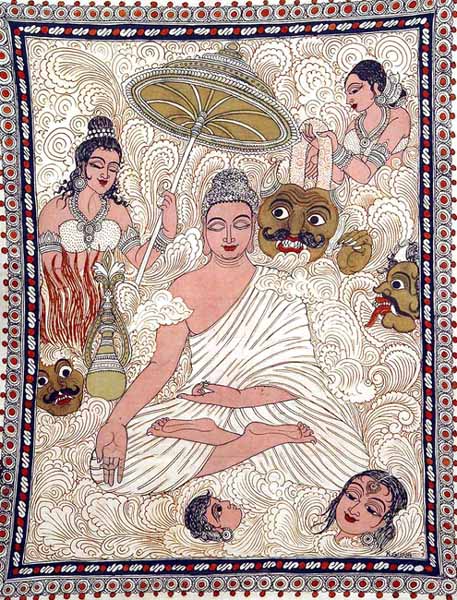 $95.00
Notify me when this item is available
Save to Wishlist Send as E-card Share by Email
Perfectly motionless, immersed in a deep state of meditation, the Buddha concentrates all his psychic strength, all his thoughts in order to receive the Illumination (bodhi). If there were gods to assist him, there were also contradictory forces that wanted to manifest themselves and act. In Kamdhatu (world of desire) there reigned Mara, sovereign of the passions who represented all that Buddha aimed to abolish. As depicted in this painting, Mara used violence, persuasion and finally temptation. He called his daughters who were the most beautiful in the world and enjoined them to go to the bodhisattva in order to tempt.

Buddha sitting here in serene countenance has his eyes closed. The pierced earlobes almost touch the shoulders. The head has a conical usnisa and the spiral knots on it denote curly hair. A garment covers his body in folds leaving the right hand and the right half of the breast bare.

This painting has the unique quality of depicting gory faces of the demons, the beautiful ones of Mara's daughters and the serene and peaceful one of the Buddha, all onto one canvas.

Temptation, To No Avail (Batik Painting On Cotton)

The Temptation Of Buddha (Batik Painting On Cotton)

The Life of Buddha As Legend and History (Hardcover Book)