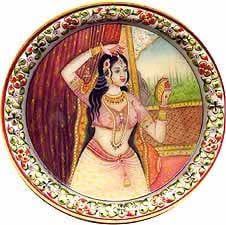 $105.00
Notify me when this item is available
Save to Wishlist Send as E-card Share by Email
The Tika is the precursor of the modern day bindi. In the medieval times when women and men wore a lot of jewelry, women wore a piece on the parting of their hair. This piece fell on to the forehead either as a big pearl or a beautifully designed pendant. When women stopped wearing this piece of jewelry, they started wearing the bindi.

There are many reasons attributed to why a woman should wear a tike on her forehead. Some say its place between the eyes is a spiritual center, the color of which is red. To awaken it and nourish it, a woman wears the red dot on her forehead. Tantrics say that it is the spot by concentrating on which a person can be easily hypnotized. So a woman wears it as a security against Tantrics. Extending the argument further is the feeling that when there is a tika or bindi on the forehead, the intensity with which anybody can gaze into the woman's eye is reduced. The tika distracts the attention and so it is believed that women will not be hoodwinked by any man.