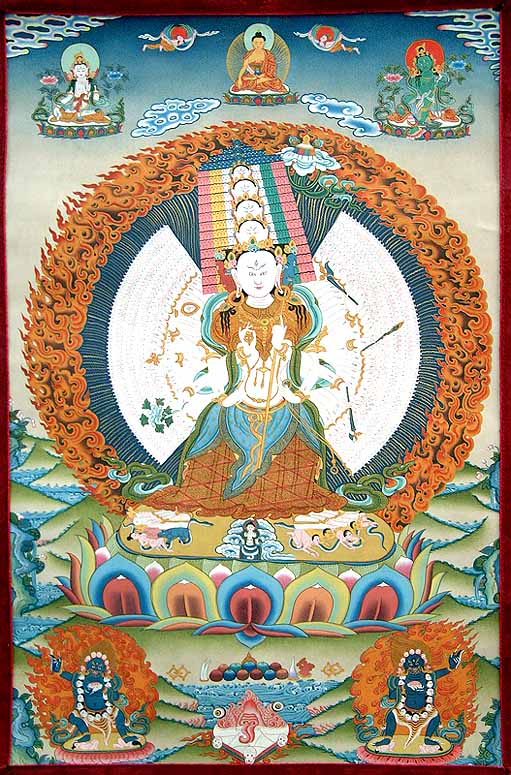 $355.00
Notify me when this item is available
Save to Wishlist Send as E-card Share by Email
Thousand-Armed Ushnishasitatapattra is a special form of the goddess Tara, a female form of the thousand-armed Avalokiteshvara. Her iconography is probably the most complex in the Tibetan Buddhist pantheon. The goddess has as many heads and legs as she has arms. She tramples on both human beings and animals. Pressed under her feet, they symbolize egocentric existence.

Ushnishasitatapattra is a powerful independent deity. She manifests this power with her thousand faces, thousand arms and thousand legs. Each face has three eyes, and the palm and wrist of each hand has its own eyes. In this detailed painting she displays them all in multiple rows, including a tall stack of heads in four different colors. Her impressive and awesome appearance is bolstered by her vigorous posture, emphasized by her wide billowing red and blue brocaded tentlike skirts and long, twisting, green scarves. Her slightly fierce mien does not outweigh the expressions of her lovely and benign nature-the beauty of her form, her white color, and the refinement of her small round face and tiny, idealized features.

Her main left hand holds the shaft of a large white umbrella at the level of her heart; its function is to protect all beings from all fears. In her other prominent arms she holds various symbolic implements, namely the vajra, the goad, the noose, the crossed vajra, the viewing mirror and the blooming lotus.

At the topmost layer of the painting can be seen in a clockwise direction the White Tara, in the centre is Shakyamuni Buddha and rightmost is Green Tara. The central Buddha is shown surrounded by two sky borne dancers, known as dakinis.

The two lower corners are occupied by images of the wrathful Mahakala.

Ushnishasitatapattra is popular with the Geluk order in particular. She is often given a prominent position among the wall paintings in Gelukpa monasteries, such as Drepung in Lhasa.