Kali The Governor of Time 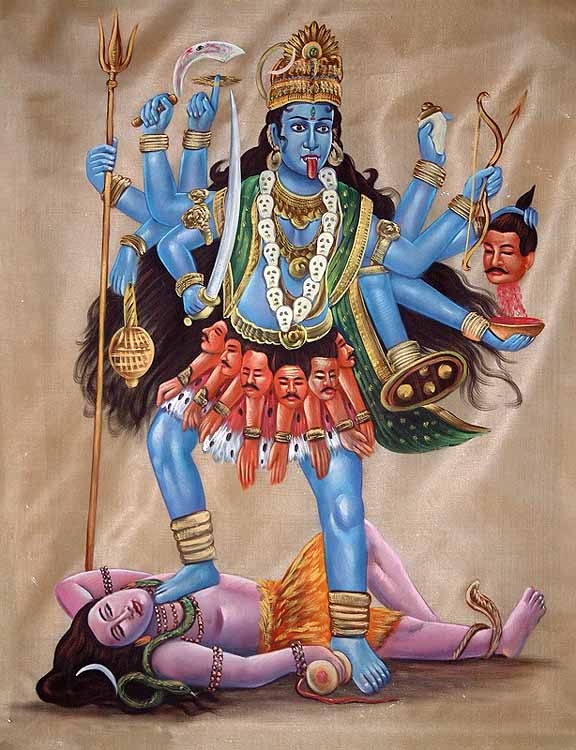 $75.00
Notify me when this item is available
Save to Wishlist Send as E-card Share by Email
The aspect of the Great Mother, Mahadevi, which grants life and feeds mankind, has its counterpart in the manifestation of Kali (the Black One). She is one of the ten Mahavidyas, Tantric shaktis who are manifestations of the goddess Mahakali.

Kali is the force which governs and stops time (kala). Everything comes from her, and she devours everything. She is the embodiment of the force of destruction, divine wisdom which puts an end to all illusion.

Kali is depicted with a dark blue or even black color. This is the color of the earth, which also creates life through destruction. Plants die and become the nutrients for new plants, seeds are exhausted by the new life which is generated by them. Although there are depictions of Kali as a maternal goddess, she may also be depicted as an old woman, made emaciated and bony by the constant bearing and feeding of life. She has an insatiable hunger for life and devours everything in her way. She often has tusks or puts out her tongue, which is dripping with the blood of her victims. She is adorned with skulls. As Shiva's wife, she subjugates him completely, and popular representations such as this, show her dancing on his body.

Jansen, Eva Rudy. The Book of Hindu Imagery: The Gods and Their Symbols: Holland, 1998.