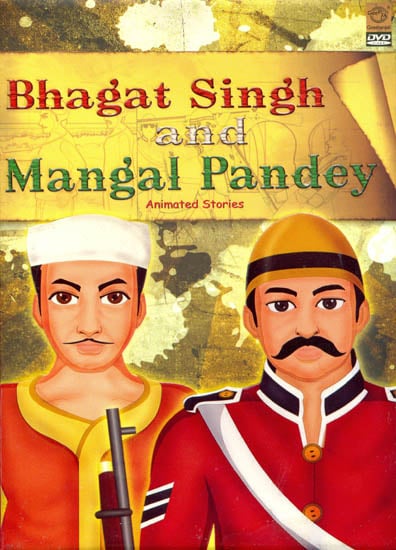 Bhagat singh
Bhagat Singh was a revolutionary Indian freedom fighter whose very name spells fearlessness. His courageous actions brought a renaissance in the minds of the Indian people. Born in a family which had earlier been involved in revolutionary activities against the British Raj in India, the mind of young Bhagat Singh was shaped early in patriotism. You will see in this animated video, how he grew up to be a patriotic leader whose heart brimmed with love for India. Thrown into prison by the British, Bhagat Singh fasted for 63 days demanding equal rights for Indian political prisoners. He was hanged for shooting a police officer in response to the brutal killing of veteran freedom fighter Lala Lajpat Rai. Bhagat Singh fearless example of fighting the mighty British Empire was followed by the youth of India. His unselfish life of daring and fearlessness inspires us to this day.

Mangal Pandey
Mangal Pandey, an ordinary sepoy in the employment of the British became a great hero when he rebelled against their tyranny. The First War of Independence (1857-58) was the first widespread uprising against the rule of the British. There were many who fought in that struggle which was belittled by the British as the sepoy mutiny. But the seeds of the revolt were cast by Mangal Pandey, a quiet soldier who fought with courage and determination against British atrocities. Mangal pandey was a soldier in the 34th Regiment of the Bengal native Infantry of the English East India Company. Pandey was born in the village of Nagwa in district Ballia (Uttar Pradesh). He joined the English East India Company’s forces in 1849 at the age of 22. Pandey was part of the regiment and fought its officers to protect his dignity and self-respect. At a time when the British seemed invincible, Mangal pandey courage made him fight them. The result was a mutiny against the British army which spread to many parts of India. This animated story brings to life the bravery and daring of the great Indian soldier who sacrificed his life for the motherland.