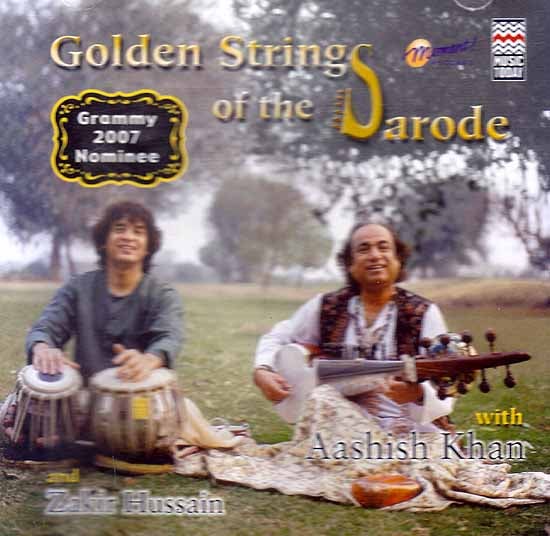 Eldest son f Maestro Ali Akbar Khan began his training in North Indian classical music at the age of 5, under the guidance of his legendary grandfather Acharya Baba Allauddin Khan. He gave his first public performances at the age of 13, appearing with his grandfather on the National Program of All India Radio from New Delhi, and that same year at the Tansen Music Conference in Calcutta with his grandfather and father Since then, he has become one of the most distinguished musicians of our time, a worthy heir to the illustrious tradition of the Senia Beenlzar and Senia Rababiya gharana (school of music), founded in the sixteenth century by Mian Tansen. Continuing his lifetime talim (training) with his esteemed father and his aunt, Smt. Annapurna Devi, Aashish pursues an international career as a dynamic performer prolific composer and much sought-after teacher.

Brilliantly pursues his quest to bring Indian classical music to the world. His musical relationship with Aashish Khan began in the late 60s, and it is with Aashish Khan that Zakir first left India to tour abroad. In addition to his many honors and distinctions, Zakir was awarded the title of Padma Bhushan by the government of India in 2002.

“Raag Bhimpalashri (or Bhimpalasi) is an afternoon raag. The moods of this raag are melancholy and pathos, with a deep meditative and spiritual feeling, This was one of the first afternoon raags I received for talim from my guru and grandfather Baba Allauddin Khansahib I was very, very young when I learned this raag from him, and although I was too young to under- stand the feelings of this raag, it was one of my favorite afternoon raags, one which I would practice every afternoon., According to the North Indian tradition, it is necessary to play and practice the raag according to their fixed timings and season, I learned two gats (compositions) in this raag, a Vilambit (slow tempo) and Drut (faster tempo) in teental (16 beats). Even until now I have never ever heard such beautiful compositions in Raag Bhimpalashri. It uses 5 notes in the ascending and 7 notes in the descending and is a very simple and easy raag to play, as long as you can have the feelings for the raag. The scale is like a Western minor scale, and the feelings are very, very deep and emotional. It keeps coming back to you again and again like an ocean wave.

Raag Lalita Gouri, comes in the category of aprachalit (uncommon) raag, it is only played at sunset and is known as Sandhi Prakash Raag, a raag for the evening twilight. The mood of this raag is meditative, tranquil and spiritual; it is like an offering to God in the evening prayers. The ascending and descending notes are not simple in this raag. Without learning this raag from the right Guru, you will never know the infinite depth and feelings of this raag, It is played at the end of the day when, in India, the young cowherders of the village are bringing the cows back home after having brought them to the open field for the day to graze, During this hour of the evening, the sun is just setting with its golden color the dust from the cows’ hooves is flying all oven and at home the housewives are lighting their kerosene lamps and their clay cooking stoves with cow dung and dried tree branches creating a typical village atmosphere of smoke with its familiar aroma. In this kind of surrounding, I grew up with my grand parents, learning my sarode and all the rare raags with rare compositions. These keep reminding me to go back to my childhood once again, and never return from there, ever. The gat which I play in this raag is in the rhythm cycle of Jhaptal which is a ten-beat cycle counted 2-3-2-3.

Raag Bharatiya, according to my Grandfathers feelings, is an image of a Mother as well as the name of Lord Shiva’s wife, Parvati. The raag Bhairavi has many names: Shuddha Bhairavi, Mishra Bhairavi, Sindhi Bhairavi or Sindhu Bhairavi. In Shuddha Bhairavi, there are only 7 notes and in other forms it uses all 12 notes. This was one of my first lessons for morning raag and it is a very beautiful raag, although people started playing and singing it in a lighter mood, in a thumri (light classical) style. Usually, it is our North Indian tradition to end the performance with this raag. If there is an all- night festival, the only person allowed to perform this raag would be the musician ending the festival. The mood of this raag is very sweet, lyrical, melodious, romantic, longing for the lover. In this piece, the melody has been played in the vocal style of thumri in the 6-beat taal, dadra.

This intimate session took place in October. 2OO2, in the unique acoustic atmosphere of the Kensington Unitarian Church in Berkeley, California, employing a recording technique rarely implemented in these times of multi-track post- processing. Using the historically coveted Blumlein Arrangement, a single stereo Neumann SM-69 microphone was positioned at the center downstage edge of the church’s stage. Approximately 3.5 meters from the floor-seated musicians. This distance was carefully chosen to spatially enhance the direct instrumental resonance with the church’s delicate wooden reverberations. A mid/Side “microphone configuration was used for recording and the music was routed to a tunable, complementary phase M/S configuration device to faithfully replicate the sound at the microphones` position, Once captured, the music was recorded directly to a 2-track 96 KHz/24bit Nagra D II digital tape machine. No post-process filtering or electronic spatial enhancement was used in the recording or mastering process.