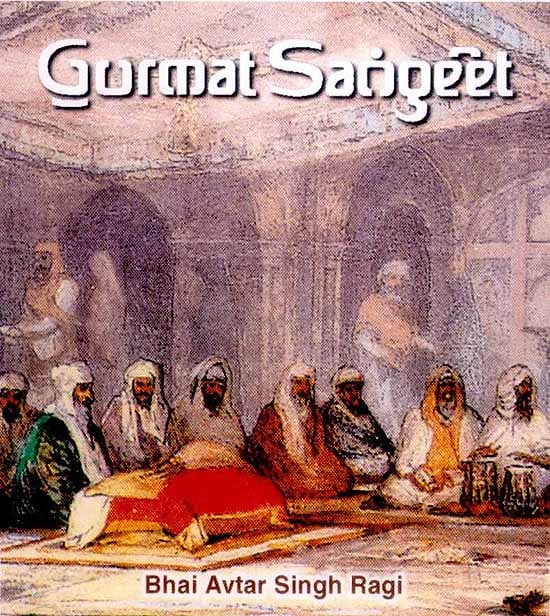 The sole mode of worship in the Sikh religious practice is the singing of his glories written in the divine word, the Shabad. (Hence Shabad Keertan).
The divine word is the Shabad (the Hymn), which is the right speech; listen to it and recite it always and the lord (the perfect Guru) will look after you.

Guru Arjan Dev, Sorath Mahalla 5, page 611 since 1604 A.D., the only prayer / worship performed at the Golden temple is the continuous singing of the Gurbani Hymns through the day. The whole structure of Sikh religious thought and practice is based on the concept of formless (The Naad) singing of the word (Shabad). Verse (Shabad) and music when brought together with the catholic sublimity of 'Raag' and 'Taal (rhythm) create beauty and sweetness and generates a power which bypasses the critical and calculative checks, barriers of intellect, and accesses the consciousness, filling it with devotion and love, thus bringing the listener to a direct communion with the eternal.

In sikh theology, the God-head is perceived as a timeless (Akaal) and a formless supreme being, the eternal truth (sat), which is both absolute and also immanent, one and the many manifest (Ekonkar). Shabad (word) is the Guru, & Guru (Word) is the enlightener, instructor, who shows the path and puts the mortal in direct communion with the Supreme Being. The praises of the lord are to be sung only in the word embodied ins the scripture (Bani), the word (Shabad), revealed by the Gurus.

Born on 8th January 1926, in village Saidpur in the former Kapurthala state, Bhai Avtar Singh is the 11th generation singer of an illustrious family of 'Raagis' who have successfully preserved an practised this original unique 'age' (style) of religious music. He, alongwith his brother Bhai Gurcharan Singh and their nephew Bhai Swaran singh (on tabla) have been doing Keertan since 1946.

His family association with the Gurus dates back to the 3rd Guru, Guru Amar Das (1479-1574) who resided in Goindwal. The keertan tradition started in their family during the times of Guru Arjan Dev (1563-1606). His repertoire of old compositions (Reets) has the stamp of the style and structure of the singing practised during the times of the Gurus (1690-1705). He is perhaps the sole exponent of the true style of rendering the 'Parhtaals' a unique variant of Dhrupad singing, originated by the 4th Guru, Guru Ram Das.

Bhai Avtar Singh started his training at the age of 10 under his illustrious father Bhai Jawala Singh, who besides acquiring the musical heritage from his father, had the benefit of learning from two famous 'raagis' of the 19th century. Bhai Sarda Singh and Bhai Rangi Ram. From Bhai Rangi Ram came the music of Udaasi (Asectic) tradition which had its roots in the lineage of Swami Haridas, and which was passed down to Bhai Avtar Singh by his father. Apart from rigorous Swar Saadhana and correct rendition of most intricate 'reets' (old compositons-Kritees) Bhai Avtar Singh has also mastered the rare bow and string instumrnt to 'Taoos', a mellower version of the present 'Diluba'.

His singing is marked by an emotionally intense spiritual yearning (Pukar), rooted in deep spiritual longing for the eternal, timeless (Akaal Purakh), having an affect of intense 'Virha' so essential in Shabad Keertan in Gurumat Sanger tradition.

Bhai Avtar Singh's music is a frozen heritage of the 15/ 16th century's music tradition of North India. He belongs to a rare category of 'raagis' of the Sikh tradition who are fully conversant and apt in singing all the 'ragas', 'lores' and variants of the music contained in the sikh scriptures, compiled way back in 1604.