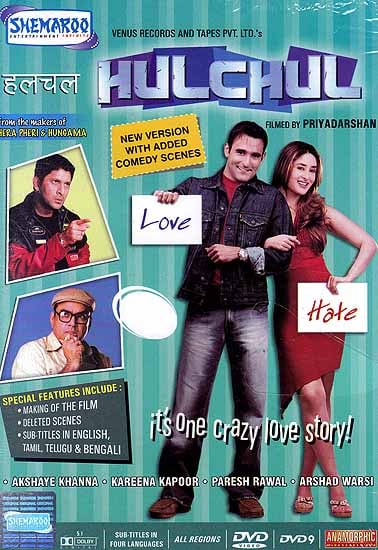 Synopsis ‘Aurat jaat ka andar aana mana hai reads a stark board in front of the Angaarchand house. His sons have taken a wow of celibacy after a tragedy struck the family, which they attribute to a woman. The fighting family in question is the neaby village’s Lakshmi Devi’s

Trivia Director Priyadarshan is one a hattrick with his H-comedy trilogy of Hera Pheri, Hungama and now Hulchul.

Though actors like Suniel Shetty and Jackie Shroff do not essay lead roles in this film, they did it solely because of their love and respect for the celebrated film maker from the south.

This is the fourth movie in Bollywood titled Hulchul and is by far going to be the most memorable one. The first Hulchul released in 1951 was directed by S.K. Ojha starring Dilip Kumar and Nargis.

The second Hulchul released in 1971 starred Kabeer Bedi, Zeenat Aman, which was about a mistaken murder conspiracy.