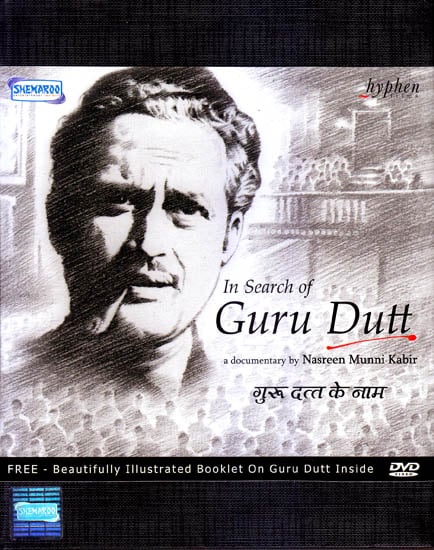 I have often been asked what I thought of my father Guru Dutt. I was born in 1956 during the year that he moved from making lighthearted musicals to serious introspection with his film Pyaasa. My uncles and aunt have told me that the transition brought a change in him which made him ore reserved and withdrawn. This is what I remember about him as a child. The truth is that I was terrified of him. His serious demeanour and his long periods of silence made him so mysterious to me and I reacted by keeping clear of his path. Joyful impression of him are also etched on my mind his keen interest in flying kites his fishing at Powai Lake his great love for animals and his taking us on holiday to Kashmir and Khandwa. There was a time when we shared out home with dogs birds, fish, rabbits, cows a chimpanzee and a tiger cub.

His early death on 10 October 1964, at the age of 39, came when I was eight. I remember that day vividly. It was my Principal’s birthday and all the juniors were invited to watch Tom and Jerry cartoons in the school auditorium at St Mary’s Convent Byculla. My elder brother Tarun and I were engrossed in the cartoons when we were asked to go to the Principal’s office where an uncle was waiting for us. Our uncle told us that we had to go to father’s flat immediately. Both Tarun and I protested but were packed off in a car and driven to Peddar Road. When we got there, we saw the somber faces of all the family and our parents’ friends and colleagues. We knew something was very wrong. As we neared his flat door at Ark Royal we could hear mother crying. Father had been laid down on the carpet in the living room. He was covered with garlands of flowers. The minute mother saw Tarun and me, she hugged us, crying. Nina, our little sister was sitting next to her, watching father intently. That is when tears started to stream down my face.

I could never talk about my father or his films with my mother. Her nervous breakdown, soon after his death, made me apprehensive about discussing his life with her. Her breakdown left a deep scar on our minds. There were days during that time when she could not even recognize us children. We dreaded a re-occurrence and believed that talking about him would trigger another breakdown. So we kept silent.

I had eight years with my father, and a further eight years with my mother. It was after my mother’s passing that I found her files containing numerous letters written to her by my father, grandmother, uncles and family. Through the letters I got to know more about the deep love between my parents. And as time passed, I discovered the excellence of his films.

In 1986, I met Nasreen Kabir for the first time. My brother Tarun showed me a letter that she had written to him, dated 25 September 1986. She spoke of her intention of making a documentary on my father to be produced by Channel 4, UK. Both Tarun and I were very keen that such a documentary be made, as many people in the West had begun to recognize my father’s work in the 1980s. Tarun met Nasreen in October 1986 and agreed to let her use excerpts of father’s films. Tarn told me how passionate Nasreen was about his work and the resulting documentary became in search of Guru Dutt.

When I saw in Search of Guru Dutt for the first time I was truly impressed by the portrayal of my father’s films the interviews with the family and is co workers and the way in which nasreen had visualized it I consider it to be the best documentary made on him. I don’t think any one can make a better documentary today or in the future. Whenever I watch it and believe me when I say I have seen it countless times it still brings tears to my eyes. I would like to thank Nasreen for her dedication and hard work. And for giving the entire Guru Dutt family a sublime film that we will cherish all our lives. Nasreen set out in search of Guru Dutt and chronicled his genius in a truly Guru Dutt Style.

In Search of Guru Dutt
The research for this eighty-five minute documentary titled In Search of Guru Duff, made in 1989 for Channel 4 TV, UK, started in the mid- eighties. This was twenty-one years after Guru Dutt had committed suicide on 10 October 1964. The idea of the film was to discover the thinking behind Guru Duff’s work and discover something of his personality through testimonies of his colleagues and family.

The research began in 1983 with my meeting his eldest son Tarun Dutt who was keen that I make the documentary, and so generously agreed to my using excerpts from his father’s films when I came to make In Search of Guru Duff some years later. I then met other members of Guru Dutt’s family, including his second son, Arun Dutt, sister lalitha Lajmi and brothers Atmaram, Devi Duff and Vijay Padukone. I also spent valuable time with almost every key member of his creative team.

A most moving moment for me was when Lalitha Lajmi took me to see their mother, the Kannada writer, Vasanthi Padukone. She was living alone in the two-room Matunga flat where the family lived from the mid-forties when the Padukones, an educated, middle- class family, originally from Bangalore, struggled to make ends meet. The frail and elderly Vasanthi Padukone pointed to a table and chair under a window and said that was where Guru Duff wrote the story of “Kash-ma-kash,” which later became Pyaasa. A garlanded portrait of Guru Duff hung on Vasanthi Padukone’s wall, as though her son were looking over her. Nearly every family member and close colleague had his photograph prominently placed in home or office. Though Guru Duff was so absent, he continued to live vividly in their minds.

This is perhaps one of the first long documentaries on an Indian film personality, and I feel most fortunate to have recorded the many fine minds of Indian cinema, many of whom have now passed away and whose contribution will always remain a vital part of Indian film history.

When the documentary was completed in 1989, I gave copies to everyone who participated. Perhaps the kindest words came from Majrooh Sultanpuri, who in his inimitable and subtle manner said: “Is mein toh halki si kahaani aa gayi.” (It has a light touch of storytelling) Majrooh Saaheb’s words countered the general impression that documentaries are dry and dull

. In Search of Guru Dutt has been for me the most important of my work and I still regret that Tarun Dull, who set me on my way, never saw the film. Tarun passed away in 1989 at the tragically young age of 34.

This documentary could not have been made without the help and support of Tarun and Arun Dutt and Channel 4. I am grateful to Guru Dutt’s family, and to each member of his team who so generously shared time and memories. Many thanks to Raman Maroo, Atul Maru, Vinod Karani, Kalpana Saraiya, Jai Shah and Yogesh Sonawane of Shemaroo Entertainment for their efforts in making In Search of Guru Butt available to a wide audience.

This film also belongs to my director of photography, Peter Chappell, Editor Martin Roche and the people who worked tirelessly with me.

This is a moving and haunting 85 minutes film that has been greatly appreciated by audiences around the world. Presented through evocative film excerpts and insightful comments this fine documentary titled in Search of Guru Dutt was made in 1989 for Channel 4 TV UK, Based on Extensive research starting in the mid eighties by Nasreen Munni Kabir Some twenty four years after Guru Dutt had committed suicide on 10 October 1964 the idea of the film is to discover the work and personality of Guru Dutt.

Enclosed is a beautifully illustrated and elegant booklet that highlights the images and comments featured in the documentary in Search of Guru Dutt.