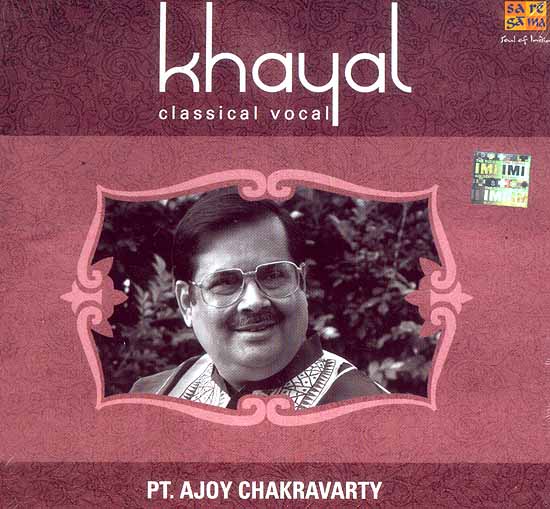 Pt. Ajoy Chakravarty is a rare blend of performer, ITC scholar and all illustrious Guru. Panditji’s ‘Shrutinandan’, a centre of excellence for educating individual needs of Indian Raga music is based on the traditional ‘Guru-Shishya’ parampara.

He is the first recipient of the Pt. Kumar Gandharva award. The Sangeet Natak Academy award has also been bestowed upon him. He also won the President’s Award as the best male playback singer. Panditji is the first and only gold medalist Fellow of ITC Sangeet Research Academy, Kolkata.

The album consists of two full fledged renditions in Raga Bageshri, a nigh melody, followed by a Tarana in Jhaptaal. Ustad Sultan Khan’s accompaniment on the Sarangi leverages this raga greatly. The next rendition is in Raga Adana, a late night melody in Madhyalaya Jhaptaal & Drut Ektaal. A composition by Pt. Jnan Prakash Ghosh in Raga Mishra Mand is a befitting end to this album.

‘Khayal’ is a contemporary popular form of Hindustani Classical Vocal Music to present a complete picture of the melodic scale called the ‘Raga’. Its genesis is the austere form called ‘Dhrupad’. ‘Khayal’ is a Persian word, meaning ‘Thought’. The genius of the creator of the Raga in Combination with the performer’s improvisation, makes a ‘Khayal’.

‘Khayal’ soon gained popular acceptance because of its communicative nature. Thus encouraging performers to further experiment with its style, thereby enhancing its beauty.

Pt. Ajoy Chakravarty’s music can be described in just one word - ‘Soulful’ His deep study and comprehension of Indian Classical Music is depicted in his unique style of presentation. He strongly believes that music exists in every creation of nature and all that we need is to ‘listen’ Panditji was greatly inspired by his father to become a musician and is today the torch-bearer of the Patiala Gharana. He obtained his initial training under the guidance of his first guru, Pannalal Samant. Panditji’s reverence towards Ustad Bade Ghulam Ali Khan is reflected in the flexibility and power of his Paltas and Taans, a specialty of Khansaheb.