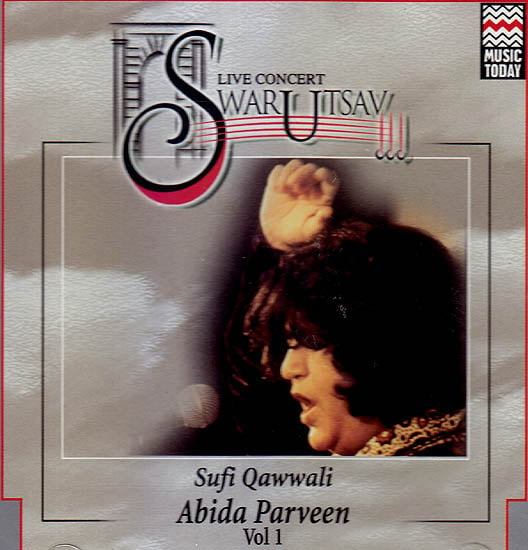 Nothing binds this subcontinent more than its musical traditions. From Bhajan to Khayal and Qawwali to Rajasthani folk songs, while there is a rich diversity of forms of musical expression in every region, there is also an underlying thread of commonality of spirit.

So as India’s premier news magazine, India Today, completed a quarter century of documenting the life and joys of our great country, it held a unique and mammoth festival of music in the heart of Delhi’s Connaught Place to celebrate the event.

At a time when big, open air musical events are at a wane, The India Today Swarutsav 2000 spanned five sessions over four days comprising devotional music, the romantic semi classical genres, classical instrumental and Khayal, Sufi music and Creative Fusion. In the stunning open air ambience of a specially erected stage at the Central Park in Connaught Place, some of the best and leading musicians from across the subcontinent gathered to give electrifying performances to regale a huge audience comprising both connoisseurs and lay listeners. Swarutsav looks forward to becoming an annual event in India's cultural calander.

As we promised at that time, Music Today is now proud to present the LIVE at SWARUTSAV 2000 series as a unique collectors' item.

Sufi music is undoubtedly the most evolved illumined and enchanting out come of the interface between Hinduism and Islam in the subcontinent. Sufism goes back to medieval Persia where mystical thinkers offered an alternative path of the puritanical ways of the Islamic cleargy. Like Hindu Bhakti it addresses the Universal and Omnipotent God through a highly personalized relationship of the lover and the beloved. Turkish Persian and Arabic influences mingled with local vernacular traditions to produce some of the most magical and moving musical form like Qual, Kafi and Qawwali. Here god becomes the mehboob (the beloved) of the Sufi and the latter’s act of love and surrender is expressed through music and dance both forbidden by the orthodoxy. The qawwali also incorporates classical and folk musical influence borrowing from like Tarana Khayal, Thumri and Dadra. At the India today Swarutsav the sufi genre was presented by the wadali brothers of Punjab the warst brothers of Hyderabad and Pakistan’s most charismatic singer begam Abida Parveen.

Abida Parveen Begins on a meditative note with a traditional Qaul Man Kunto Maula, Replete with touches of the classical idiom. In this song easily accessible shers (couplets) are interspersed with meaningless rhythmic syllables of the Tarana along with the mesmerizing chant invoking the maula (The preceptor) and Hazrat Ali. From here abida Parveen goes on to sing the foot tapping tere ishq Nachaya karke Thaiya Thaiya eclectically drawing from the poetry of the famous Punjabi and Hindi Sufi saints fro Bulle Shaha and Sultan Bahu to Kabir. Her songs meander through a free wheeling spontaneous choice of ragas and the pulsating rhythms that are the hallmark of the popular Qawwali tradition. The sufi’s love of god was also a radical challenge to the Islamic orthodoxy. The most moving call came from the medieval sufi Mansur al Hallaj of Bhagdad who declared the principle of anhal haq, meaning I am god. This is a thought that is also found in the aham Brahmo asmi cocept of Hinduism. For this mansur was brutally killed. Later though Mansur became a cult icon of the Sufis. In the song are logo in this album abida Parveen recounts the justifications Mansur had offered to the people who vilified Him.

A native of the Sind Province of Pakistan Abida Parveen is a rare female performer of Sufi music. Blessed with a versatile voice and an inheritor of the tradition of Shah Lateef and other Sindhi Sufis, she ash over the years expanded her repertoire to include Punjabi Urdu and Hindi Sufi poetry. This has made her magic accessible to millions across the subcontinent and in the west too. At Swarutsav she gave mesmerizing high tension live wire performance.