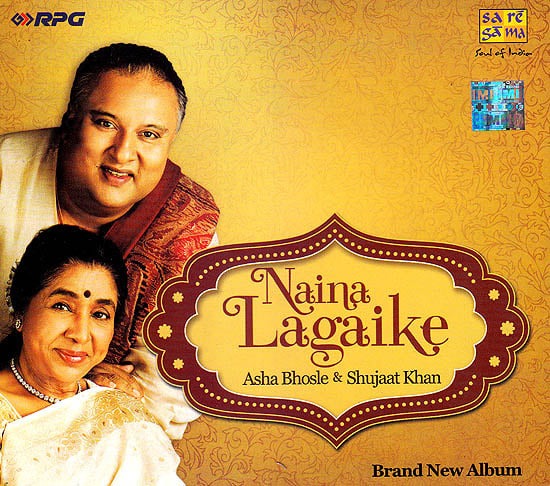 As music industry executives we are a privileged lot who get to interact with some of the greatest talents in the country. Artistes who touch millions of people’s lives with their songs become work colleagues to us. It’s an incredible feeling because these revered figures because these revered figures become mortals in the studio and interact with us as friends. And when that happens there is always the fear of losing the reverence or awe one has for an artiste’s talent and of becoming a critic in trying to get the best out of a recording.

Then there’s the flip side as we discovered while recording Naina Lagai Ke.

It was perhaps the most incredible studio experience that one could have while recording an album. The respect one had for Asha ji’s voice and ability grew by the day and as a person too we could just marvel at her simplicity humility and of course incredible spirit.

Every young musician or must industry executive should have the good fortune of witnessing Asha ji recording in the studio. The first instruction the recording engineer receivers is to remove her voice from the headphones! She doesn’t listen to her own voice in the cans!!! We’ve never seen any other vocalist do it.

This recording for Asha ji was different because it did not have a music director telling her what to do or how to sing something that hasn’t happened to her in years of singing for greats like O.P Nayyar and Shankar Jaikishen to Pancham da and A.R. Rahman it threw her initially but after getting used to the idea this became the big differentiator for her on the album.

That was because initially we had planned to record the album as alt albums are recorded as alt albums are reached these days. On a programmed track after which we would add other music parts including Shujaat bhai’s vocals. Asha ji wasn’t at all happy about this and kept advising us to record live as we had a keyboard’s guitar and tabla set up in the studio. After we recorded two songs on tracks we saw the wisdom in what she was suggesting and went with it. The first song we did live was. Aaja Re Piya and bingo! That was it!

Asha Ji and Shujaat bhai then proceeded to sing all the song live even the ones we’d earlier dubbed on tracks. This was the real thing they would be facing each other and do a vocal Jugalbandi… throwing challenges at each other encouraging one another to do something vocally different taking their time by doing an aalaap or sargam in places making time stand still as they improvised delivering nuances in the vocals that left us all breathless.

The beauty about Shunjaat Khan’s singing starts wit his velvet voice. It’s soft and soothing and big and warm just like the man himself. When he opens up it’s large and expansive again not unlike the man! He does a lot of humming which is extremely appealing and of course there is an ease in the way he sings which makes the delivery sound absolutely effortless.

Contrast this with Asha Ji’s voice which has the clarity of a bell and you get the image of lightning cutting through a cloud! Listen to her pronunciation of Urdu words the emphasis on a particular world or syllable or the spaces she creates in her singing and you know you are in the presence of greatness.

Then there is Shujaat Khan on the sitar the only man who makes a sitar look like a toy he plays with the dexterity of a magician and the passion of a madman. He’s at that stage of his career when he is too accomplished to be labeled a maestro and too young to be tagged a legend and it’s a heart stopping experience watching him in full flow.

Asha Ji was excited about the project as she was teaming up with a classical musician after 1996 when she recorded the Grammy Nominated Legacy with Ustad Ali Akbar Khan. She was a friend of Shujaat Bhai’s father Ustad Vilayat Khan Saab and her exposure to the classical music fraternity of that generation had been very respectful and reverential.

Shujaat Bhai turned out to be a different kettle of fish much to her relief we suspect full of fun disrespectful in a respectful way easy going and of course incredibly talented it wasn’t just Asha Ji but all of us who took to him like fish to water. In the matter of a few hours together in the studio this had become one large, happy family including Aslam Khan who does the sound for Asha Ji’s live shows and whose studio we were recordings in Benvin Fernandes his assistant engineer of quick mind and quicker fingers and pawar the studio boy who got us tea and Asha Ji biscuits it helped of course that Shujaat bhai’s son Azaan was playing acoustic guitar. Upmanyu Bhanet was a friend of the khans from Delhi and Amit Choubey on tabla accompanies Shujaat bhai on most concerts. Rounding off the team in the studio was Paramjit Singh khurana from Delhi a friend of all and a stalwart in the music business.