Never Seen Anyone Like You: Tumsa Nahin Dekha (DVD) 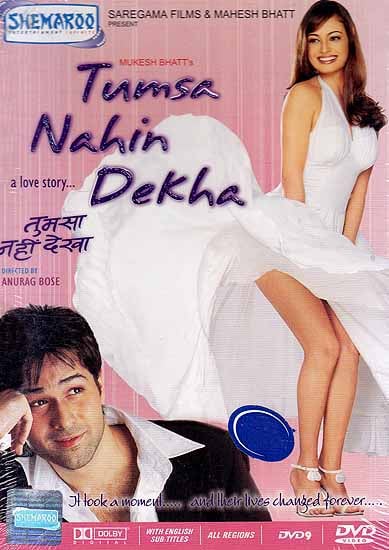 $24.00
Notify me when this item is available
Save to Wishlist Send as E-card Share by Email
From the DVD

Director by: Anurag Bose
It took a moment…and their lives changed forever…

Coming from Anurag Bose, the director of the 2004 hit Murder, Tumsa Nahi Dekha explores a romantic interlude between a stripper Jia (Dia Mirz) and a rich brat Daksh (Emraan Hashmi). While Daksh learns Jia’s reality, he is forced to marry a hi society girl Anahita (Pooja Bharti), whom he detests. But if Daksh doesn’t marry Anahita, he wouldn’t inherit the millions. Daksh has to now choose between being rich and being happy.

The concluding portions of Anurag Basu’s Tumsa Nahi Dekha was shot in a set designed as a coffee shop in filmalaya studios
A movie of the same title was make in 1957 starred Shammi Kapoor.
Director Anurag Bose made a come back after a tough battle with cancer during which Mahesh Bhatt stepped in to direct some scenes. He said his dream to complete the film inspired him to fight cancer everyday.