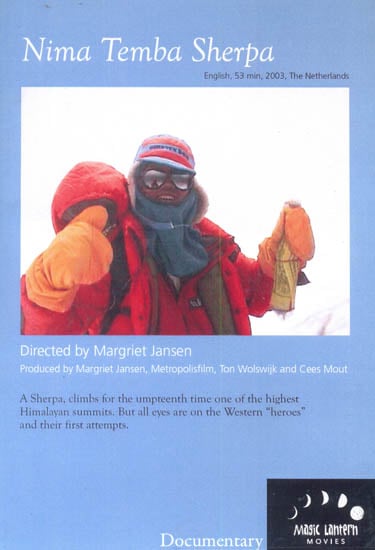 FREE Delivery
Only 1 available
$40
Ships in 1-3 days
Notify me when this item is available
From The DVD
Credits
Artist: Margriet Jansen
Produced by: Margriet Jansen, Metropolisfilm, Ton Wolswijk and Cees Mout
Format: DVD
Duration: 53 min. Approx
About The DVD

A documentary on Sherpa Nima Temba, who climbs for the umpteenth time one of the highest Himalayan summits. The other members of the expedition, most often Europeans or Americans, follow his footprint. The media have an eye only for the Western heroes. The Sherpa that makes these acts of heroism come true is never in the spotlight, However, from the very beginning of mountaineering, it is thanks to the Sherpa that these summits have been reached successfully. The film follows the climbing of one of the highest Himalayan summits and looks at it through Nima Temba’s eyes against the background of his biography, of the cultural and daily life in Kathmandu and of his native soil in the valley of Rolwaling.

Margriet is an independent filmmaker based in the Netherlands. Born in 1959 in The Hague, Margriet finished her study on Film Art at the University of Amsterdam in 1993 with a specialization in the Visual Anthropology. After her study, she began to make independent films on anthropological themes and develop educational material for secondary education Some of her prominent films include ‘Witchcraft as Religion’, ‘Welcome To Karenni’ and ‘Beyond Development’.

‘Nima Temba Sherpa’ was released in 2004 in several film theatres across the Netherlands as part of the DocuZone programme. It won the Audience award during the Kathmandu international Film Festival in 2004, and broadcasted by several international networks.