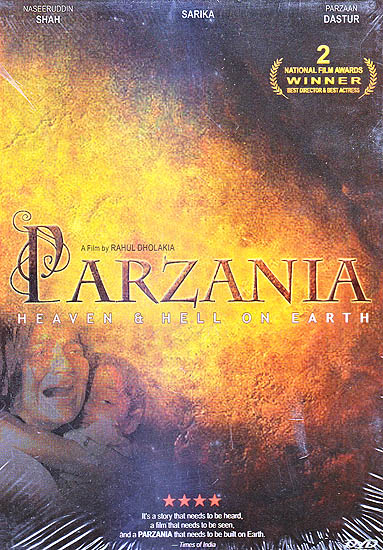 Parzania is the breathtaking untold story of one family and a community’s loss during an act of communal violence that stunned the world and changed a country forever.

Cyrus and his family are Parsi followers of a rarely practiced religion that is bother small n numbers and neutral to religious politics. They are middle class and live happily in a housing development which is mostly Muslim. He has a beautiful wife named Shernaz. Strong and practical at times only her inner strength keeps the family going. Parzan is their imaginative 10 year old boy and Dilshad their adorable daughter.

Parzania is the imaginary perfect world created by Parzan where the buildings are made of chocolate the mountains of ice cream and all you do is play cricket all day. It is a world that only he and his seven years old title sister Dilshad can truly understand.

One morning the beauty and peace that is India is rocked beyond measure as a fire erupts in a train killing 58 Hindus.

Within 24 hours 100,000 Hindu citizens storm into Ahmedabad. While Cyrus fights for his own sanity and searches for his child Allan battles to uncover the truth behind the riots and any possible meaning to the insanity he has witnessed. People start to question the explanations they are given and a human rights commission is formed. But will the truth come out? And does any of id matter to a distraught family who just wants to find their little boy.