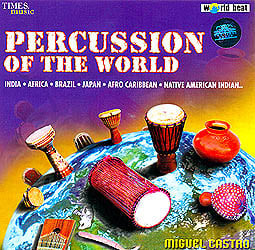 Percussion of the World (Audio CD)

Like many of us, I enjoy dropping by the local music store just to look around and chat with the owners. One day, Art Motes asked this "Castro fellow", the new percussion director at Mercer University. I hadn't, but filed this away for future reference. A few weeks later I read about an upcoming jazz concert at Mercer, featuring Miguel Castro. The Jazz Combo and Jazz Ensemble perform several concerts a year, and I had never been to a single one of them. I went to this one though, specifically to meet Miguel, and during a break, cornered him, introduced myself, and inquired about private lessons. I had no idea at the time, but I had, at that moment, embarked on my own Rhythm Journey.

Six months later, after repeated, pestering telephone calls, I had my first lesson. (We talked for a full hour before he let me lay a hand on the cow hides.) I soon realized why it took so long to get an audience with this man. He was and is so completely committed to music and percussion that there simply was not enough time for him to be everywhere at once. In addition to his duties as Director of Percussion Studies at Mercer University, Miguel directs four high schools and four middle schools in adjoining Houston County, Georgia. Miguel has built these drum lines from the ground up. Now they consistently win or place in regional championships. At the beginning of one particular school year, Miguel told his students, "all of the drummers (seniors) have now graduated. Everyone here today is a percussionist."

Part of Miguel's philosophy is that all learning is transferrable. (Although I had never played with sticks before, by my third lesson, he asked me to pick up mallets and practice an exercise on vibraphone.) Evidently, he was going to teach me his full approach and total concept to percussion or nothing at all. His concept and immense talent keep Miguel in great demand in a wide variety of musical settings, from the Macon Symphony to the best Latin Jazz band in Atlanta, "Los Vecinos del Mundo". In 1998, when Middle Georgia College in Cochran formed their first marching band in 50 years from scratch, Miguel was there. He conducts the finest hand bell choir in Central Georgia, directs summer camps and after-school programs for children, facilitates local "drum circles" (where members of the local community join to make music for leisure and fun) and still can find the time to travel to London and other places to record with such artists like Hossam Ramzy. He is founder and director of Saoco Percussion Ensemble and performs with this group all year-round.

Over the last few years, I have been fortunate enough to have seen and heard Miguel perform and record classical, country, rock, African, Gershwin, and everything in between. "Rhythm Journey" is a composite of Miguel's diverse musical experiences. Just listen to "Quiet Sunset" with local Native American f1utist and drum maker Dan Bray. Then check out the unique arrangement of the spiritual, "Amazing Grace" in 5/4, opening with traditional Scottish bagpipes, then journeying to Africa with Djembe, and finally to the Deep South with the voice and guitar of Joey Stuckey.

In the words of the incomparable Barney Fife, "Now, you just gotta relax ... flow with me ... let me guide you into the land of rhythm and pleasure." Miguel Castro is truly on a "Rhythm Journey", and I for one, am happy to be along for the ride. I invite you to join us.

Miguel Castro studied from 1977 to 1981 at the "Conservatorio Nacional de Musica" in Santo Domingo, Dominican Republic. After that he went to New York for his "Master Degree", which he achieved in 1986. During the entire time of his education he has been very active with live performances. He played in various orchestras) Orquesta Sinfonica Nacional, Swiss Philharmonic Orchestra, Carol Morgan Operatic Society, Youth Philharmonic Orchestra, Orquesta Sinfonica de Maracaibo, ... ), various jazz groups and Latin American music groups. Miguel also performed at several Radio and TV Stations in Santo Domingo. By 1978 he had already been teaching at various schools - amongst them the Conservatorio Nacional de Musica, where he himself had studied earlier. In 1991 Miguel moved to Germany where he played in numerous Latin American groups and in jazz, pop and acoustic bands. He did tours through Europe with various groups, among them the Puerto Rican Salsa star Marvin Santiago.

In 1992 Miguel returned to the United States where he has since continued as an active performer as well as a teacher of his music. At present he is a Director of Percussion Studies at Mercer University in Macon, Georgia and the Artistic Director of the "Saoco Percussion Ensemble". Mr Castro is also in demand as a clinician and recording artist and maintains a busy schedule in and outside the USA.