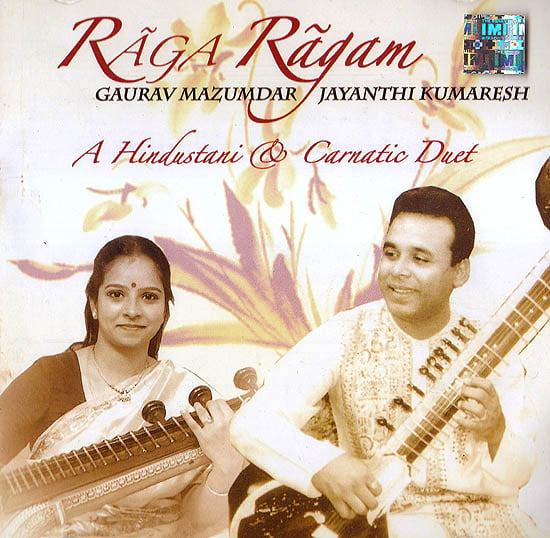 Gaurav Mazumdar comes from a family of well known musicians of Allahabad. He started his training with vocal music and violin taught by his uncle J.D. Mazumdar his father Dulal Mazumdar his cousins Kamala Bose and Jayashree Roy and by Pandit Nandkishore Vishwakarma. When he took up the sitar his guru was no less than Pandit Ravi Shankar and is performances all over the world have often been in conjuction with the famous veteran. Perhaps as part of his guru’s inspiration he has shown a particular delight in performing duets with celebrated Carnatic musicians including Ravikiran Shashank and of course Jayanthi Kumaresh Again, following in his master’s footsteps he ahs relished the challenge of stepping outside his tradition and that of India as a whole to work with such western musicians as Philip Glass Daniel Hope Kenyy wemer and the English chamber Orchestra meriting a Grammy nomination for his East meets west album.

Jayanthi Kumaresh Or Veeani Jayanthi as she is affectionely known by her admirers was born into the famous lalgudi the veena when she was only years old inspired by the example of her and guru Padmavathi Ananthagopalan. Her renowned uncle the violinist Lalgudi Jayaraman was also one of her most influential musical guides. When Dr. S. Balachander one of the most famous veena players of the age hear her play he was so impressed that he look her as a pupil. With performances all over India and the west since 1990 and accolades including A Top grading from all India Radio and Best Veena Artiste on four occasions from the respected Music Academy. Chennai jayanthi has established herself as a leading performer and teacher both of veena and singing.

Satish Kumar is a leading exponent of the mridangam the principal drum of Carnatic music. He was born into a musical family and gave his first concert at the age of 7. Now based in Chennai the centre of Carnatic music he plays an active part in all India Radio working with other percussions masters and has also given many concerts around the world appearing with some of the biggest names.

Debasish Mukherjee from that most musical of cities, Kolkata has regularly performed globally with Gaurav Mazumdar. He studied the tabla, the ubiquitous drum pair of Hindustani music with his father Kanai Mukherjee and also with one of the true greats of the instrument Pandit Kishan Maharaj of Varanasi.

The ancient art of Indian classical music in based on raga and tala or taal supported by a drone. By the mid 16th century largely as a result of political and religious upheavals it became clear that the tradition had bifurcated into northern and sourthern styles. The broad principles governing raga and taal and much of the Sanskrit terminology survive in both regions to the present day but repertoires instruments and performances styles differ enough to be instantly distinguishable. By the mid 19th century Carnatic music had established its care repertoire with its great saint composers, dominated by the revered Swami Tyagaraja (1767-1847), while court patronage under the lengthy and powerful Mughal dynasty brought steady change in the north and by the same time gave us the features of Hindustani music known today. It is often said that Carnatic music is more composition-based, rendering the songs of the great composers, while Hindustani music is more improvisation-based, using compositions more as frameworks for extended improvisations. This generalization, however, risks a disservice to both traditions, as the very life blood of all good Indian musicians, be they from the north or south, is the meticulous rote learning of a large repertoire of compositions and a refined facility in improvisation. What is interesting is that over the past 50 years, roughly coinciding with India’s emergence as an independent nation, moves have been initiated to bring the two traditions together, as part of the wider concern of national unity As with nearly every recent innovation in Indian music the famous name of Ravi Shankar must be invoked, although the great Carnatic composer Muttuswami Dikshitar (1776-1835) had long before made strides in this direction. In our own time, the borrowing of ragas from each other’s repertoire, the expansion of Hindustani taals inspired by the vast repertoire of Carnatic rhythmic resources, and even the practice of public duets across the two traditions (as on this disc) have become increasingly popular. In many cases the duets have proceeded quite successfully along parallel lines. two ragas sharing the same scale and other principal features, and two feats either sharing the same number of beats or, more usually, one having double the number of the other (as in the pairings of the taals featured on this disc). The instruments also share close similarities, stretching back long before any rift between north and south was recorded. Both the Carnatic veena and the Hindustani sitar are plucked and fretted stringed instruments, each prominent and highly respected within its tradition and now all over India and the whole world, which applies equally to the Carnatic single drum, and the Hindustani pair of drums, fable, both played with consummate skill using only the fingers and bare hands

The Music In this recital, Jayanthi Kumaresh and Gaurav Mazumdar bring the two great classical traditions of Indian music together, she from the perspective of Carnatic music and he from that of Hindustani music In the two expositions of classical ragas and teals (tracks 1 and 2) they do this in the customary way of finding the common ground. Raga Kalavati is a Carnatic rage which has been adopted as a great favorite also in Hindustani music, while Yaman and Kalyani are mainstays of their respective traditions and very similar for the chosen teals, again principal structures within each tradition the simple expedient of divisibility has been employed 16 versus 8 on the first track and 10 versus 5 on the second.