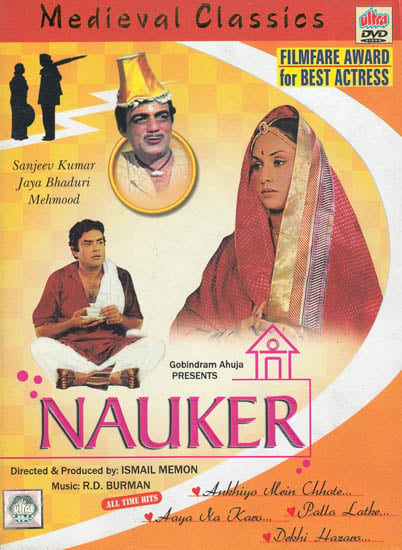 Widower Amar (Sanjeev Kumar) is well-off financially, and lives in a house with his daughter, and servant Dayal (Mehmood). His sister and brother-in-law (Anwar Hussain) want him to marry again, so that his daughter can have the love and care of a woman. Amar reluctantly agrees. Together they set out to check out two sisters, Shobha (Madhu Malini), and Sheela (Meenal). Amar goes as Dayal, and Dayal goes as Amar, as Amar is not sure if a stepmother will be able to bestow care and love as a real mother. They arrive at the household of Durga (Lalita Pawar), Shanti Swarup (Manmohan Krishna), Renu, Sheela, and their servant Geeta (Jaya Bhaduri). They begin to settle down, Dayal in a spacious room, and Amar in the servant’s quarters, which consists of an untidy room with no electricity. It is not long before Amar finds out that he is attracted to Geeta, and not to the two sisters, but in his present state, he cannot reveal himself, and openly propose marriage. In the meantime, Durga starts getting suspicious about Amar, and starts wondering if Amar is actually a servant or a crook.

He was always ready to take unconventional roles that challenged him as an actor. He played Mirza, a chess- obsessed Lucknow (citizen of Lucknow), in Satyajit Ray’s classic Shatranj Ke Khiladi (1977). Perhaps his best- remembered roles were in the blockbuster films Sholay (1975) and Trishul (1978).

During the early 1980s Sanjeev Ku mar did more supporting roles than playing the lead. In 1980 he starred in a Punjabi movie Fauji Chacha. In 1985, when he was 47 years old, he had a massive heart attack, resulting in his death. He never married. He was however involved with actress Sulakshana Pandit, whom he did not marry, having been turned down by actress Hema Malini whom he was in love with at the time. Hema Malini went onto marry her frequent co-star Dharmendra. Ironically for an actor who played many elderly roles, he did not live to the age of 50.

She started her career with a supporting role in Satyajit Ray’s Bengali film, Mahanagar at the age of 15, with Anil Chatterjee and Madhabi Mukherjee. Prior to this, she had appeared in two Bengali film, one a 13-minute short film, Suman, and another a Bengali comedy Dhanni Meye (1971), as Uttam Kumars sister-in law.

She first acted with her future husband Amitabh Bachchan in the film, Bansi Birju (1972), followed by B.R. Isharas Ek Nazar also in the same year. Amitabh had undergone a string of flops, and when most lead heroines refused to work him, in Salim-Javed scripted, Zanjeer (1973), she stepped into the film. The film turned out to be blockbuster and gave rise to Amitabh Bachchans angry-young-man image. This was closely followed by their pairing in films like Abhimaan (1973), Chupke Chupke (1975) and Sholay (1975).

Her daughter Shweta was born while Jaya and Amitabh were working on Sholay. Following this she retired from films and focused on raising her children. Her last film as a lead actress was Silsila (1981), opposite her husband. During the late 1980s she wrote the story for the film Shahenshah which starred her husband in the lead.

Such was Mehmood’s impact on the Hindi film scene that at the peak of his career in the late 60s and early 70s, leading heroes of Bollywood began refusing to work with him as they were afraid of being overshadowed. Perhaps there was some truth behind this - Gumnaam (1965) for all its fine ensemble cast is primarily remembered for Mehmood and his signature song - Hum Kaale Ham To Kya Hua Dilwaale Ham; Pyaar Kiye Ja (1966), Humjoli (1970). Today one recognizes Mehmood in tiny roles in films like Do Bigha Zameen (1953), CID (1956) and Pyaasa (1957), but in those days he went unnoticed.

It was Parvarish (1958) with Raj Kapoor and Mala Sinha where Mehmood was first noticed in a big way. The success of Chhoti Bahen the following year led to a series of films with Shubba Khote, Sasural (1961), Ziddi (1964), Love in Tokyo (1966) among others. Oil Tera Deewaana (1962) starring Shammi Kapoor and Mala Sinha firmly made him a top star. Thereafter he took over from Johnny Walker as the leading comedian of Bollywood. Practically every well known film of the 60s had a parallel comic track with Mehmood – Arzoo (1 965), Paththar ke Sanam (1967), Padosan (1968) etc. In fact when Filmfare added on the award for best performance in a comic role - Mehmood was the first winner for his outstanding work in Pyaar Kiye Ja.