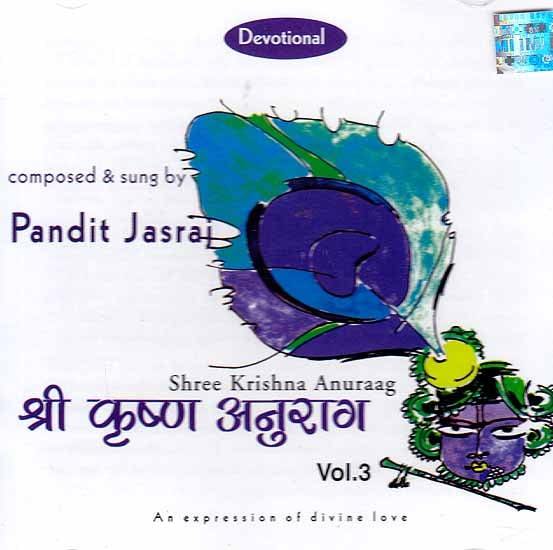 Radha-Krishna, the Divine Eternal Couple…a relationship that is deeply spiritual and mystical. The meaning of Krishna is the one who attracts all; so it stands for the Lord’s aspect that is ‘supreme joy’ (Brahmananda) in the universe. Radha is synonymous with beauty imbibed with Bhakti, full of surrender and oneness with the supreme soul, Shri Krishna. Their’s is a substance-attribute relationship that can be described as - ‘He is milk, she it’s whiteness’, ‘He is fire and she, the power of burning (dahya-shakti)’. Radha is in fact that which allows the substance [Krishna] to realize its own nature. She inspires the Krishna-Bhakt to realize Krishna himself.

SHRI KRISHNA ANURAAG (‘anuraag’ means ‘divine love for the unknow’) is an attempt to depict the absolute divine love of the unknown ‘Radha-Krishna’ swaroop. It is a collection of devotional renderings on Shri Radha-Krishna by Pt. Jasraj, presented in three volumes. These are poetic compositions in Sanskrit compiled by Smt. Prerana Thakore and composed and sung by the inimitable Pt. Jasraj, the doyen of Indian Classical music.

These volumes are divided into six prahars or time slots of the day, each prahar signifying ‘Darshan’ or form of worship of Krishna that is carried out at that time of the day. Thus we have - Mangala darshan, Shringar darshan, Rajbhog darshan, Utthapan darshan, Sayam-Arti darshan and Shayan darshan. Each volume thus depicts two of these darshans. Each stutilshloka has been set to an Indian classical raga, that best suits the bhava and rasa of the particular rendition as also the particular time of the day.

‘Sayam Aarti’ and ‘Shayan Darshan’ are rendered in this volume.

“A deviation is made from the ‘eight-prahar darshan’ that is usually followed, by eliminating the ‘Gwala darshan’ and ‘Bhog darshan’, that are an integral part of ‘Shri Krishna Leela’.

This is the evening Darshan of the Lord, worshipping him with an aarti, as he comes home after spending the day with the gopas-gopikas (cowherds) of Vrindavan. This darshan philosophically states that if you have spent your life doing good deeds, then the ‘evening’ or twilight of your life would be pleasant.

Harinama-mala stotra is the chant made very popular by Pandit Jasraji himself, wherein Shri Krishna is invoked by his various names and each shloka is embedded in the mantra ‘Om Namo Bhagavate Vasudevaya’. This chant builds up in energy towards the end and takes one to a state of eternal serenity.

It is said that Pandit Jasraj regularly sings this stuti at most of his concerts and it is among his personal favourites.

This is followed by Gopala Niranjanam, an aarti full of fervour and gaiety.
SHAYAN DARSHAN
This is when the Lord prepares himself to go to sleep. Accordingly, these compositions are set to night ragas. This darshan philosophically states that one must be prepared for the ‘shayan’ (death) in one’s life, as it is inevitable and as certain as birth. It is merely another event in one’s life and nothing more than that.

Vrindavan Stuti- This stuti written by an ardent devotee, Shri Chaitanya Mahaprabhu (14th-15th century), glorifies ‘Vrindavan’ where Shri Krishna spent the most romantic and beautiful years of his life.

Shri Krishna Lahari Stotra, depicts in detail the daily activities of the Lord while he was in Vrindavan-playing and dancing with the gopis, playing the flute, tending to the cattle on the banks of the Yamuna and so on.

This volume ends with the Sharnagati Stuti, which are shlokas embodying utmost devotion and depict total surrender by he bhakti to Shri Krishna; these shlokas are embedded in the mantra ‘He Krishna Tavasmi meaning ‘O Krishna! I am yours.’

Pandit Jasraj, considered as one among the living legends in Indian classical music today, is undoubtedly one of it’s outstanding talents. He was born in 1930, in Hissar in the state of Haryana, into a musical family. His father Pandit Motiram and elder brother Pandit Maniram were both vocalists, and it was his brother who completed his induction into the family tradition, which is referred to as the Mewati Gharana.

Panditji is blessed with the rare ability to express the essential beauty of the music in a form that is always fresh and appealing to the listener. His incomparably rich and sensuous voice and technical virtuosity are harnessed to a genuinely devotional spirit, making his music satisfying on many levels. Both a traditionalist and an innovator, he places emphasis on maximising expressive power and aesthetic relish, rather than on holding to traditional practice for its own sake.