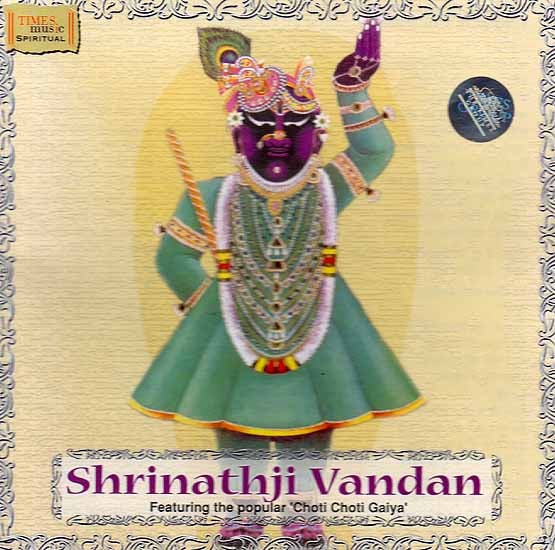 Shrinathji is an important swarup representing Krishna at the age of seven. In the 15th century, perhaps, as a reaction to the increasingly ascetic direction in which Hinduism was heading towards, a new off set of Krishna worship called Pushti Marga, the Path of Grace, was born in Vraja, in North India.

Vallabhacharya, the founder of Pushti Marga, stressed worship through the joys of life and living and devotion to Krishna as the royal child Shrinathji through song, dance, dress, decoration and painting. The swarup of Krishna as Shrinathji is enshrined in a temple in Nathdwara, Rajasthan.

Shrinathji Vandan is a unique musical concept for all Krishna devotees and music lovers. Compositions dating from 16th century poet Surdas, (an ardent student of Indian classical music) to the modern but equally soulful and peace giving lyrics have been encompassed in this album. What makes this album so unique is that for the first time ever, Shrinathji Chalisa has been thus penned and presented in a musical form.

Daily recitation of the Chalisa is said to invite Lord Krishna to one’s inner most sanctum which brings supreme peace and joy to the devotee thus making one a Krishna Das (the servant of Lord Krishna).

This Album presents for the first time ever the Shrinathji Chalisa in a musical form. Daily recitation of this Chalisa is said to invite Lord Krishna to ones inner most sanctum thus bringing supreme peace and joy to the devotee.