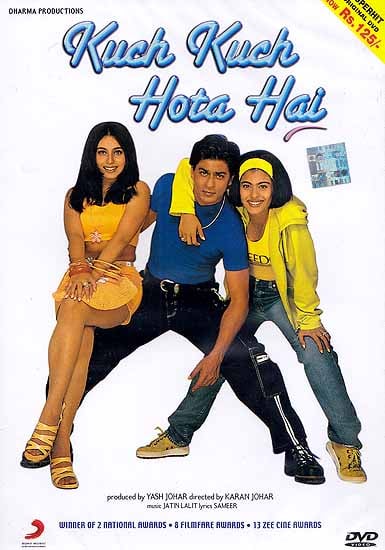 Something Happens….A Sweet Tale of Friendship and Love: One of the Most Successful Hindi Film Ever (DVD with Subtitles in English) (Kuch Kuch Hota Hai)
Email
Whatsapp
Facebook
Pinterest
Twitter
Copy link

“Kuch Kuch Hota Hai” is sweet tale of friendship and love. ‘Rahul (Shah Rukh Khan) an Anjali (Kajol) are inseparable friends at college. Unknown to ‘Rahul, Anjali is in love with him who in turn falls heads over heels for new student Tina (Rani Mukherji). When Anjali learns the truth, she is heartbroken and leaves college. In the meanwhile, Rahul and Tina get married.

Nine years have now passed and Rahul is a single parent after Tina’s demise. What has become of Anjali? What is Rahul’s daughter upto? Who is Aman? The plot unravels in a dramatic climax and all’s well that ends well.

“Kuch Kuch Hota Hai” caught the imagination of the country when it opened in 1998, with its great starcast, young look zingy music and a lovely story.

It also gave the Indian film industry one of the most talented directors of the generation - Karan Johar.