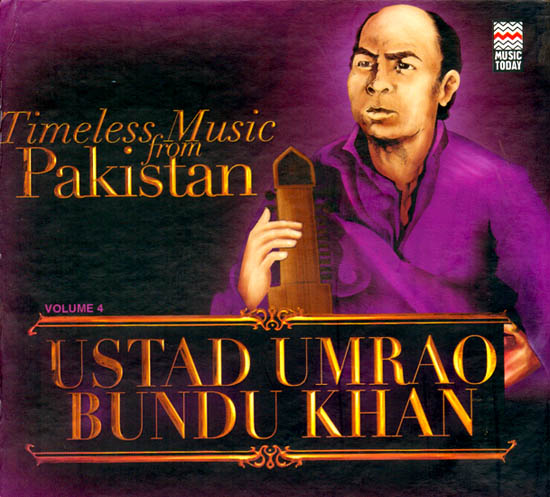 One of the most outstanding exponents of Delhi Gharana in undivided India, Umrao Bundu Khan Saheb’s birth date is not clear but he is believed to have been born around 1915. He was the son and disciple of Sarangi – Nawaz Ustad Bundu Khan. He received training in vocal music from his maternal uncle and legend of Delhi Gharana Ustad Chand Khan Sahib but was adept at both vocal music and Sarangi. In fact, he was one of the few musicians who was equally skilled both as a vocalist and an instrumentalist. His rendition on the sarangi reflected the nuances of Ustad Bundu Khan Saheb and his vocal performances were highly influenced by Ustad Chand Khan’s style.

Umrao Bundu Khan Saheb migrated to Pakistan in 1947. He was a regular performer at Akashwani in undivided India as vocalist and after moving to Pakistan was appointed the music director at Radio Pakistan. He was later invited from Karachi for the Akhil Bharatiya Khadi Pradarshini in 1954, where he gave one of his most memorable performances. He was an extremely versatile singer and was adept at khayal. thumri dadra, tarana, Qaul, kalbana. He performed in various countries and for numerous albums even in Pakistan.

The glorious journey of this legend came to an end in 1970 with his demise in Karachi. His music remains immortal not just through him but the various disciples who carry his legacy forward including his sons Mazhar Umrao and Athar Umrao.

This series presents unsurpassed legends of Classical and Semi Classical music who mastered the art through their exceptional vocal abilities. It is an attempt to celebrate the glorious journey of some such legends including – Roshanara Begum, Ustad Salamat Ali Khan, Ustad Fateh Ali Khan, Ustad Umrao Bundu Khan, Ustad Ghulam Hassan Shagan Khan and Ustad Amanat Ali Khan. These artistes have made a monumental contribution in popularising Classical music, making way for all future generations to tread the path of artistic brilliance and honour.