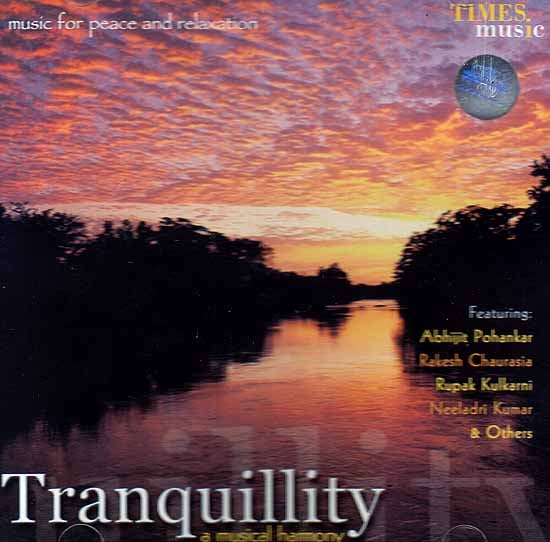 According to an eastern legend, God made a statue of clay in His own image, and asked the soul to enter into it. But the soul refused to enter on the grounds that is nature was to fly about freely and not imprisonment in a body of clay. Then God asked the angels to play their music, and as the angels played, the soul was moved to ecstasy. Through that ecstasy, and in order to make the music clearer to itself, the soul voluntarily entered the body of clay. It is said the soul found a restful respite in the tranquility that comes from listening to music.

Our sense of and attraction to music shows that it lies in the very depths of our being. In the East, music has long been used to alter states of consciouness and heighten levels of spiritual awareness, in recognition of the fact that music connects us to our inner-most being, and in so doing, also connects us to the larger Truth.

This album aims to capture that harmony which comes with the mind and body being turned to the music of the higher spheres, creating an intensely peaceful state that produces an easy sense of beauty and tranquility for the mind, body and soul.

Born in 1975, Abhijit Pohankar is the son of the well-known classical vocalist Pandit Ajay Pohankar. Given his birth into a musical family, Abhijit Pohankar was exposed to the rigours of the Hindustani Classical tradition at a very early age onwards.

Abhijit Pohankar is unique in that he is the ‘only’ classical keyboard player on the concert circuit. His sound on the keyboard is akin to a mixture of the Santoor and Piano - a very distinct and unique sound to experience! In this he has been fortunate enough to learn from his guru, Pandit Shiv Kumar Sharma. Abhijit has not been overtly restrictive to classical music alone. His repertoire also includes what may be broadly termed as fusion music.

Mountain Magic - Raga Pahadi
Pahadi is literally the melody of the mountains, rooted in the folk traditions of the Himalyas. While strictly not part of the Classical oeuvre, its growing popularity in recent years has made it an essential component of the concert scene. On this track, a brief introductory piece on the flute is followed by a percussive composition in medium tempo, with guitar and keyboards joining in to fill the gaps.

Joy: Raga Jhinjhoti
Jhinjhoti is an immensely popular Raag, which is often heard at weddings and other celebratory occasions. On this track, its upbeat celebratory mood is captured beautifully by the sitar and the flute, both exercising a degree of quiet restraint and inducing a state of controlled joy.

Tranquillity: Raga Gorakh Kalyan
Gorakh Kalyan is thought to have originated from the folk music of the Indian region of Gorkahpur and has become popular only the early part of the 20th century. The overall impact of the flute-sitar combination on this track is one of serenity with a subdued hint of romance. This composition does not contain a rhythm section, allowing a mood of quiet tranquility to prevail.

Sweet Romance: Raga Bageshri
The instrument played on this track is a very rare and unique instrument belonging to Rajendra Saingh’s family - the swarlin is shaped like a violin, but has greater depth and its closest resemblance is sound is to the Sarangi. Apt for lyrical compositions, it provides for interpretation of the subtle, serene romanticism of the raga, through a slowly unfolding, exploratory rendition.

Salutation: Raga Des
Raga Des (meaning ‘homeland’) carries a poignant, heart-wrenching melancholy of its own, with overtones of home sickness and nostalgia. In this track, a brief introduction is followed by a rhythm section in which the flute and the sitar trail one another in a kind of animated dialogue.

Journey: Bhatyali
Bhatyali is the traditional folk music of the Bengali boatmen based on the reality of his being forever at the mercy of the temperamental nature of the rivers. The Santoor’s percussive effect in conjunction with the Tabla attempts to capture the nuances of an uncertain journey journey on troubled waters.

Tender Emotions: Raga Kaunsi Kannada
This is a composite raga with elements from the Malkauns and the Darbari Kannada Ragas. The Sarod brings an enhanced vitality to certain notes and allows the raga to unfold in a mood of quiet dignity and restraint. The melody is one that altogether urges the listener to surrender completely.