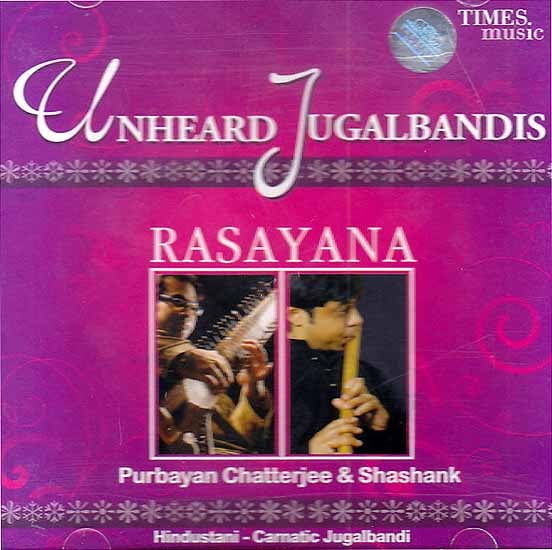 'Rasayana` means chemistry which occurs in abundance in this new collaborative work ‘between musicians from North and South India.

India is a vast country with a rich and vibrant culture playing host to a plethora of musical expressions and styles. From the thirteenth century onwards, when the Mughals first entered the northern part of India, its classical music has evolved into two distinct forms.

The Carnatic tradition of the South is often perceived as the most authentic, untainted form of classical music, while the Hindustani tradition of the north is a fusion of India's own indigenous music and the Persian music culture which accompanied the art loving Mughal Emperors.

Although distinctions can be made between the two forms concerning repertoire and presentation there remains many shared elements. The melodic concept of Raga and the rhythmic system of Tala are central to both styles. "Sruthi Mata Laya Pita", a popular saying with both teachers students alike, tells us that in Indian music the notes are the Mother, and the rhythm, in the form of tala is the Father!

In recent times artists from both traditions have strived to bridge the gaps. Ravi Shankar has been responsible for bringing several traditional Carnatic ragas into the North Indian classical music repertoire. South Indian ragas such as Charukeshi, Kirvani and Hansadhwani have become extremely popular with audiences in the North. The truth is that modern day India is producing a wealth of young artists who are keen to explore the whole breadth of their own music traditions and cultural inheritance.

Purbayan Chatterjee comes from a family steeped in the classical music tradition. His father and guru Partha Chatterjee is a distinguished sitarist in his own right. In the tradition of the Senia Maihar gharana, founded by Baba Allaudin Khan, Purbayan's playing is an aesthetically satisfying combination of the best facets of "Dhrupad" and "Khayal", North India’s two most established classical vocal forms. In recent years Purbayan has had the benefit of guidance from Ustad Ali Akbar Khan, one of India's greatest sarod players, once described by Yehudi Menhuin as the finest musician of the twentieth century At a young age he has already toured the world several times at the same time dazzling and delighting international music audiences.

Born in 1978, Shashank made a sensational concert debut at the age of eleven playing on the Southern Indian traditional bamboo flute and took the Carnatic Music scene by storm overnight. In his relatively short career he has already succeeded in mastering several flutes of differing registers and fingerings introducing elements of Northern Indian music into his repertoire in a way that sounds totally natural. Critics from he world over have described his flute playing as highly creative, melodious and conforming to a vocal tradition of high quality. He has also developed innovative techniques on the bamboo flute which are the envy of flautists worldwide, including double blowing, which entails playing two notes from different octaves simultaneously.

Yogesh Samsi is one of those rare tabla players whose reputation has been built on his consummate artistry in both fields of accompaniment and solo playing. Son of highly respected vocalist, Pandit Dinkar Kaikini, Yogesh had the great fortune to be groomed as a tabla player under the guidance of the late Ustad Alla Rakha Khan, who held Yogesh in the very highest regard and with deep affection.

Patri Satish Kumar is the regular accompanist of Shashank. Over the years the two have succeeded in developing a unique musical relationship which seems to enter into the realms of telepathy. The mridangam is a double sided barrel shaped drum, the most widely used percussion instrument in South India.

For this recording, the musicians have chosen to play the North Indian evening melody Raga Puriya Dhanashri which is a combination of two older and established ragas, Puriya and Dhanashri. The performance has four distinct parts. Firstly, there is the Alap, a major feature in both Hindustani and Carnatic music. Alap is the gradual unfolding of the melodic shape of the raga. It seeks to reveal the character of the raga through at first, slow deliberate yet spontaneous improvised phrases. The second phase of the Alap is known as Jor and Jhalla. This section sees the introduction of a rhythmic pulse without the aid of any percussion accompaniment. The jhalla, a characteristic of the Hindustani music of the North, involves a faster tempo with more lively extended improvisations.

The composition, in a nine beat rhythmic cycle known as Matta taal in the North, and Khandajati Triputa Talam in the South, marks the introduction of both the tabla and the mridangam. While the percussionists are given several opportunities to demonstrate mastery of their respective instruments, both skilfully maintain a fine balance between virtuoso and sensitive, responsive accompaniment throughout. The piece concludes with a playful and exciting rhythmic dialogue between the two drums.

'As a student of music I always had a great fascination for the Carnatic "taal-shastra" that is the science of rhythm in their system. Shashank is a dear friend of mine and I am very fond of his music so I jumped at the opportunity of working with him. My initial apprehension was how we could find common ground in the form. The content of the Hindustani and Carnatic comes close together with many ragas with different names sharing the same notes. The only way I could rehearse with Shashank was on the phone as we live in cities far apart. So after several discussions on the phone, I still reached the studio situated in the idyllic Sanjaya with a sense (no puns) of apprehension. This completely vanished as soon as we took our instruments out and just started playing. Shashank’s approach to melody has embraced a great deal of the Hindustani tradition. I personally felt very much at ease with the rhythmic structure as I have a passion for rhythm within me. As Satish bhai (one of the most fantastic mridangam players I know) composed one tehai after another making the second one more complex than the first I felt a challenge growing within me to master it all and play them at first shot without any retakes. Although this dream didn’t completely become a reality we could complete the recording without making it an overdub nightmare for Sense Producer Derek Roberts I who normally handles difficult edits like an ace tennis-pro handles his racquet. The fact that we finished the whole recording (including rehearsal time and editing!) within 18 hrs bears testimony to how well we gelled as a team. Yogesh bhai (brother) seamlessly blended into the whole scenario, having had years of experience of working with Carnatic musicians. In fact he helped me master many of the rhythmic facets of the way Carnatic musicians handle the 9 beat rhythmic cycle, not counting divisions of 6 and 3 as we do, but 5 and 4. Overall when I hear the recording and again I feel good about the fact that it has a good balance between the “chaine” or the “spiritually calm fluidity” in the alap section and the "tightness" and alacrity of the end section where there is a question and answer sequence between all the musicians.