Ziver The Precious One (Audio CD) 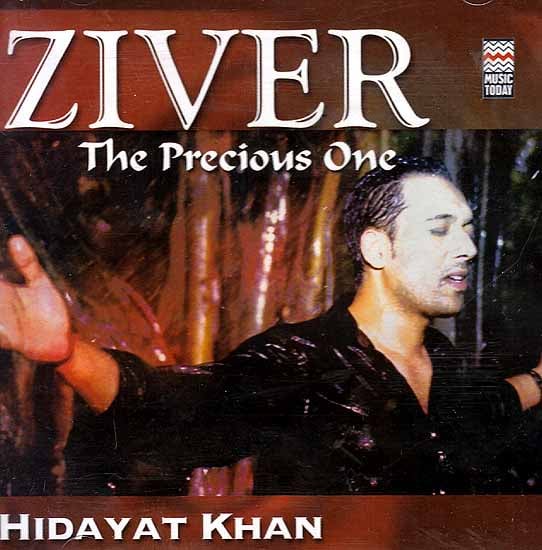 Hidayat Khan began his formal training of Indian classical vocal music from his legendry father Ustad Vilayat Khan at the age of four and continued it until he was 14. From Khan Sahib he learned to sing khayal and a variety of other forms of Indian classical music. During this time he performed at various concerts including performances at prestigious venues such as the Royal Albert Hall in London Kennedy Center in Washington D.C. Carnegie hall and Alice Tully hall at the Lincoln Center in New York.

At the age of 14, Ustad Vilayat Khan Sahib initiated him formally into sitar. This was followed by intensive sitar training which consisted of hours of riyaaz (practice) and taleem (training) every day. His vocal music training helped him develop as a sitarist and quickly catapulted onto the stage.

Hidayat has performed all over the world. This included major performances in Europe, Japan, USA, Malaysia, Indonesia, Canada, Singapore and India. Recently he completed a tour in Italy where the press commented on his ability to caress and invoke the primordial sound of creation. He believes in sincere riyaaz to take him to the heights of artistic Endeavour.

One of the highlights of Hidayat’s performances is the melodic movements that completely replicate the human voice in the true form of gayaki ang. This style of Sitar playing was introduced by his father Ustad Vilayat Khan. In order to enhance this style more in Hidayat’ sitar playing his father initiated him into vocal music first.

Multi dimensional is a word that can be used to describe this performer as he has taken part in musical compositions for films worldwide including Mira nair’s Kamasutra. In 1999 he completed a background track for the discovery channel program on tigers titled tracking a legend. His style and presence on stage lead the audience to be enraptured with his performance. Hidayat also takes keen interest in teaching music to interested students.

This debut solo fusion album has been a goal of his ever since the fusion genre of music came into the world. Hidayat’s taleem and riyaaz helped him to accomplish this goal. Ziver is a reflection of Hidayat’s past his present and where he intends to go in his future.

Ambarish Das a national scholar has earned his place among one of the rising talented classical vocalists of the country. He had his advanced grooming under the guidance of Ustad Maskoor Ali Khan. Rashid Khan and Pt. Kumar Prasad Mukherjee. Endowed with a voice marked by power Ambarish has evolved a style of his own which speaks eloquently of his originality and virtuosity.

I want to thank Maylookh for exceptional work and giving this album the edge it needed. It has been an amazing experience working with him his talent which shows not only in his tabla playing but his extraordinary thinking. He’s one of those people who can think outside the box. I respected his input on each track over and above my own thoughts. He’s one of the most phenomenal programmers that I have ever worked with.

I also want to thank Babbluda at Om Studios. He is by far that best engineer I have ever worked with. He has a unique sense of aesthetics and understanding of music that very few musicians have.

I would also like to thank the entire staff of Om studios for all of the late nights crazy hours and above all many cups of Chai.

I would like to thank my entire team of musicians. Ambarish Prabhuda Hamtu, Babuda and all the other people who have contributed to this album.

I want to thank my friends and my family without your continuous love and support this album would not be possible.

Finally I would like to thank you the listeners of this album and my fans. I hope you enjoy this album and that you continue to support my in my future Endeavour’s.

Ziver began as an idea that was set into motion after the recent outburst of fusion music that illustrated a link between the east and the west. For me this genre of music was not fulfilling. Based on my edification in classical Indian music I wanted to create a stronger collaboration of the east and west that integrated a more synchronized relationship between music and instrumentation. To accomplish this to which I had grown up listening. This includes Indian classical hip-hop, Latin, Spanish techno & electronica world music and of course contemporary Indian music. The next step in the process of constructing an album from scratch involved building a team of people form different fields training and backgrounds of music (Mayookh – a tabla player and the programmer of the album Prabhuda – a guitarist Ambarish – a vocalist and myself). In this way we could work together and use our specialized areas of expertise to add feedback and broaden the scope of the album. Although I am the face behind the album. I recognize that it was a combined creative effort by many people which enhanced and diversified each individual song.

The name Ziver meaning the precious one which is also the name of the first track of the album was given by Sunita Menon and the lyrics of the song were written by Aamer a close friend of mine. As the first song Ziver began as innocently as the ideas of the album without a concrete plan. Prabhuda and I rehearsed together by simply enjoying and taking advantage of our time together in the studio. We were able to let go of our inhibitions jam out simultaneously and just have fun. The two of use spent mush time battling the Indian sitar against the western guitar and before we knew it the track was complete. Ironic to the title of the track Ziver was unplanned lacked expectation and was a naïve creation based on two artistes feeding off of each other’s ideas.

Ali Maula the second track of the album is a very famous and popular track that has been created and performed by the greatest musicians. Thus it was difficult to remain true to the nature of the track while still formulating something new and original. After gaining energy from the production of Ziver out team was ready to take a crack at putting a fresh song together. Unlike the initial prediction the rehearsals flowed naturally and all the necessary elements of the song fell into place. Even the Chai-wala would come into the studio and dance to the beat of the innovative and invigorating track. This of course was due to the fact that we worked 24/7 on the song without realizing it.

The third track of the album entitled Chhaap Tilak was the hardest track to complete. We worked continuously on this track until the end. We were beginning to feel a slowdown to try working on it again we would be too tired and worn out from working on the other tracks. It was an intimidating track of everyone. Then finally one day I sat down alone in the studio with only the sound engineer dubbed the sitar lines vocal lines and harmonium and somehow the track felt perfect. This track symbolizes the challenges that many artistes myself included face during the production of an album.

Ziver as a whole includes a large variety of different styles of music there is a strong Latin influence in the song Ziver there is a rhythmic and groove style hip-hop influence in Jiya Laga Na ; Mari Dhimi Payal incorporates a mand from Rajasthan which was used by Ustad Vilayat Khan my father and greatest hero and Chhaap Tilak is a Qawwali classic. In this way the album brings in music for every generation. Listeners of this album regardless of their musical background and tastes should find something that they can relate to and enjoy because of the various influences. As my debut solo fusion album Ziver was a very exhilarating experience. I have gained a lot of experience with other people’s work which spans many different kinds of music Indian music commercials, remixes, and hip-hop and have learned after many years how to exploit other musicians abilities to their best. My favorite thing about the album is that the subtle details added by so many people sets Ziver apart form all other albums of its kind.