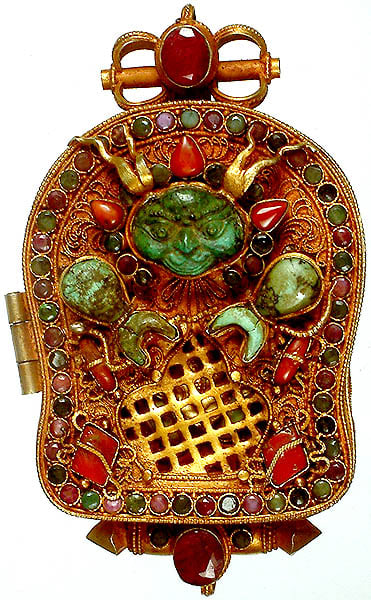 $1125.00
Notify me when this item is available
Save to Wishlist Send as E-card Share by Email
An Amulet or Gau box is an item of magic potency attached to the body, often suspended from the neck like a pendant. It has a very long history in Asia and is still popular in Tibet, Mongolia, China and Nepal. It is used as talismans, protection from disease and evil, and symbols of faith and devotion to deities and guru etc.  virtually any reason anyone has ever had for wearing a symbolic ornament. The talismanic amulet of a tiger's tooth is often worn, or the dried umbilical cord is placed in a Gau box, for protection of children from childhood diseases and evil eye. As a container for the sacred empowerments, the great teachers reify the teachings and the invocation of various deities by actually invoking the deity into an amulet, which is then worn for benefaction. Gau boxes may also be large, elaborately decorated with precious jewelry items etc.

On the exterior, Garuda is depicted, composed of turquoise, red coral and other gemstone. Faceted beads of emerald, ruby with other gemstone surround the scene. At the top of the box, there is tube with a vajra and a faceted ruby, while at the bottom, are faceted ruby with twin emerald and reel ornamented tube appears capped with conical ends, and below that is a ring for suspending other ornaments or tassel. Moreover there is stupa shaped open work lattice design below the figure of Garuda. The back of the cover is embossed with syllable mantra Om Ah Hum.

The cover of the box opens with a hinge at left side to reveal an image of the Future Buddha Maitreya which has been depicted against a fine filigree work. He is made of turquoise and sits on an elevated seat in bhadrasana. His both the hands are in vitarka-mudra (preaching-gesture). His attributes, dharmachakra (wheel) and kalasha (vase) on lotuses are made of red coral, while lotuses are made of faceted emerald and ruby etc. Faceted gemstones are also set on the crown of Maitreya. Turquoise, red coral and emerald surrounded the image of Maitreya, are set with a brilliant wire work on the side of the walls of the box. The front of the seat which support the feet of future Buddha are decorated with faceted emerald and ruby.

Garuda, the mythic solar bird, possesses talismanic properties associated with his being a natural enemy of serpents. He is popular both in Buddhist and Brahmanical pantheon. Half-bird and half-man, the wing Garuda, holds a serpent in his beak and outstretched arms. He is supposed to protect against diseases associated with water and illnesses connected with serpents.

Maitreya embodies the enduring hope for the liberation of all sentient beings, for even if the Dharma were to fade or be or be forgotten on earth, there will be another Buddha to discover and reveal the precious truths that can help to free living beings from suffering. Moreover Maitreya is the example of individual enlightenment, the role model for all practitioners in their aspiration to become future Buddhas. The future savior Maitreya personifies loving-kindness (maitri) , an aspect of compassion.

Maitreya, thus, is the hope of civilization expressing the invisible future by means of the visible. He is the lord of enlightenment and the representation of mercy. It is said that whereas Avalokiteshvara delivers from suffering, Maitreya confers happiness. There is variety of the form of Maitreya with various combinations of attributes and mudras. Buddhist philosopher Asanga visited Maitreya in Tushita heaven and was initiated into the mysteries of tantra. The devotees of Maitreya hoped to be reborn in His heaven and the conception of Him as the future Buddha endowed His followers with further hope that if they could be redeemed by his teachings. And with this spirit followers wear his amulet box. 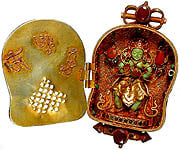