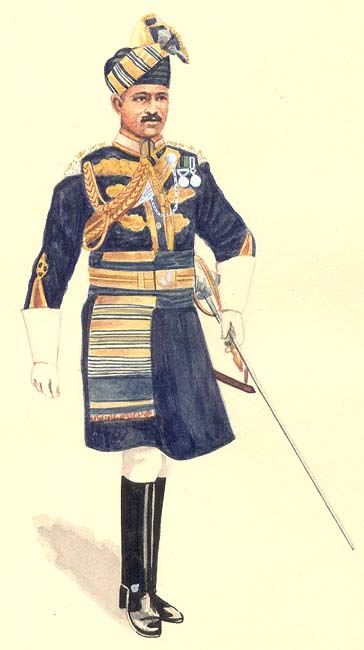 $30.00FREE Delivery
This item can be backordered
Time required to recreate this artwork
3 to 4 weeks
Advance to be paid now
$6.00 (20%)
Balance to be paid once product is ready
$24.00
Notify me when this item is available
The main centres of miniature paintings that have enriched the collection of Punjab, development specially in Lahore, Amritsar, Jind, Patiala etc. The ruling chiefs of these states patronised miniature paintings following the footsteps of the Mughal emperors.

This portrait of a soldier, belonging to the 15th Lancers, is painted in such a manner that it depicts movement; The limbs are so positioned. The mustachiod officer wears a cap-like turban with a wide band going across it to spread like a florette. His facial expression shown that he is happy being where he is, doing what he is doing. The royal blue tunic with white trousers and black Wellingtons is the uniform of his Cadre. The shoulder flaps depict his status and the medals speak of the glory. The golden braids and trimmings adorn his wide chest. A broad band goes around his waist like a sash; a flap with horizontal stripes emerges from the waist band to fall on one side. The sleeves of his tunic have a stiff wide cuffs starting from the wrists and covering most parts of his forearm. The Wellingtons are sleek and shiny. In his hand he holds a lancer and the other hand is closed in a fist.

Grey shading near the officer field not only depicts a shadow but gives the impression of solid ground, indicative that the portrait is not suspended in mid-air.