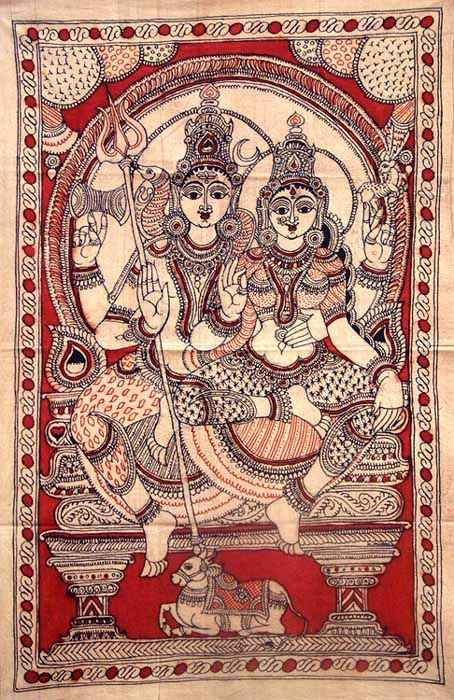 $41.25  $55   (25% off)
Quantity
Notify me when this item is available
Shiva, as Hindu mythology holds, is the destroyer of the universe, with snakes all around his body; ashes smeared on his forehead and long locks of hair.

The Kalamkari craftsmen, instead of placing Shiva-Parvati on the hills of Kailash or wandering from wandering from place to place has seated them on an elaborate throne which is antithetical to usual iconography. Perhaps he was a staunch Shaivite and wanted to see his beloved god-goddess in this form. They are wearing jewel encrusted high crowns and lots of jewelry. A big snake wounds its way around Shiva's neck. Here Shiva is shown with four arms - with one frontal hand he makes a gesture of protection and with the other he holds Parvati by her waist. In the other two hands, he holds a rattle drum, an inanimate object and in the other a fawn, a living being. In the process, he shows he's the master of both.

Dichromatic in color, with bold, black outlines, it not only shows harmony between two individuals but harmony in composition as well. Shiva's bull Nandi is placed in the center of the two legs of the throne giving ample proof of balance and judicious use of space. Despite just a couple of colors, the picture is full of verve and energy and there lies it unique nature.