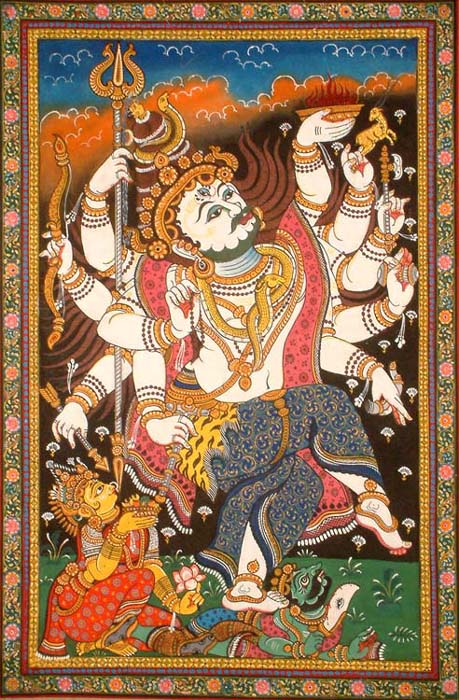 $215.00FREE Delivery
This item can be backordered
Time required to recreate this artwork
6 to 8 weeks
Advance to be paid now
$43.00 (20%)
Balance to be paid once product is ready
$172.00
Notify me when this item is available
Kashyapa, patriarch of the celestial race created devas, the gods of light and asuras the demons of darkness. By granting them mutually antagonistic roles, he ensured their eternal enmity.

Like his counterpart Durga, Shiva also helps in destroying demons and saving the world from their negative influences. Shiva here has ten arms, radiating from the torso in violent movement. He wears a crown on his matted hair, from which Ganga emerges. Ornamental necklaces, rudraksha bead strings and serpents co-exist to form the jewellery decorating his body. Shiva, shown here with a beard and a moustache has a vertical third eye on the forehead. He crushes the demon by dancing on his back as he looks up, helpless and defeated. Also in the foreground is the Devi, trying to appease her enraged Lord.

Shiva is the embodiment of tamas, and the black background reaffirms the statement. The sky is blue with restless clouds painted in fiery orange. A vast range of colours has been used to demonstrate powerfully the violence of the theme.