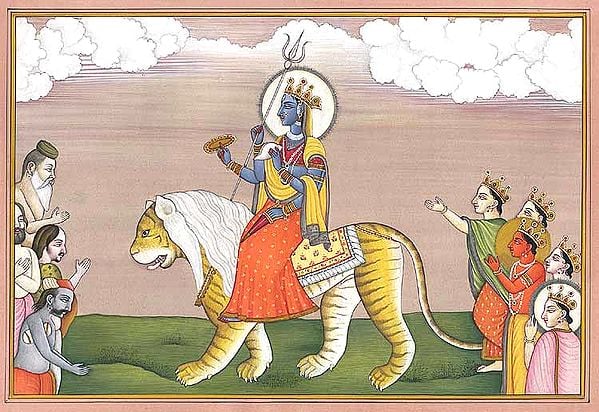 $205.00FREE Delivery
This item can be backordered
Time required to recreate this artwork
8 to 10 weeks
Advance to be paid now
$41.00 (20%)
Balance to be paid once product is ready
$164.00
Notify me when this item is available
Meditation on Jaya

Who, indeed, does not want to achieve something in this life? But the human mind, with its limitations, its weaknesses, its conflicts and shortcomings, feels the need for a stronger helping hand in its search for success. Awareness of our ineffectualness against the mightier forces at work in the universe further spurs us to invoke the protection of a heavenly power. In such situations, the devotees of the Goddess pray to her as Durga - the remover of all obstacles, who, as Jaya, bestows superhuman powers called siddhis upon the seeker of truth. The word jaya means victory, and the goddess Jaya symbolises the triumph of the spirit over all obstacles. In the verse quoted above, she is described as Kameshwaraprananadi - the life-breath of Shiva, who is totally lifeless without her. Hence, she is Kama-pujita, i.e., worshipped by Shiva, the conqueror of the lord of love, Kamadeva. She is also Kritajna, the witness and judge of all action, as the sun, the moon, the stars, death, time and the five elements, which are all her form, are supposed to judge all actions while witnessing them.

Adorned with weapons and missiles, this Warrior-Goddess is seen seated on a lion manifesting herself to the devout who have their hands folded in supplication. She is Simhasaneshwari, seated not merely on the lion-decorated throne, but on the lion itself, the emblem not only of sovereignty but also of the highest brute strength controlled by the spiritual power which she embodies. Riding on the shoulders of the lion emphasizes Jaya's valour for she controls this 'huge lion called the mind, tending always to prowl the forest tracts of sensual pleasures.'

The Goddess holds in her four hands a conch, a disc, a dagger and a trident. The chakra (discus), also often seen in the hands of Vishnu, symbolises the ability to cut through all obstacles and propel the wheel of life towards its goal. The three prongs of the trishula (trident) represent Devi's power to create this world of images and forms with the three gunas, sattva (goodness), rajas (activity) and tamas (inertia), which according to Samkhya philosophy are the basis of the phenomenal universe. The dagger, the weapon of war, in one of Jaya's left hands, symbolises her ability to conquer all debilitating fears and doubts of the mind. Hence the devas with their bejeweled crowns on her left, the austere rishis with their flowing beards and matted hair on her right and the householders alike pray to the Goddess:

Jaya Devi is terrorizing the enemies with her side-glances. The matchless radiance of her beautiful limbs is like a ravishing beauty. Look! Adorned with weapons and missiles, and riding on the shoulders of a lion, she is manifesting herself before the gods (deities), who are imploring her for success in their mission; the devout are standing to attention, with their hands folded; the sky is laden with white clouds; and the lion is marching ahead at a serene pace. The backdrop has a brown colour, matching the dark complexion of Devi. The exquisite and ensnaring contours of the gods speak of the wonderful brush of the artist; with flowing grey beards and matted hair, the devout are demonstrating their dedicated devotion. The artist has used his finest brush to paint the face of Devi; pleasant and aesthetic. Other characteristics of the portrait are that the distinct colours and their combinations balance harmoniously and pleasingly.

Book: The Divine and Demoniac Mahisha's Heroic Struggle with Durga