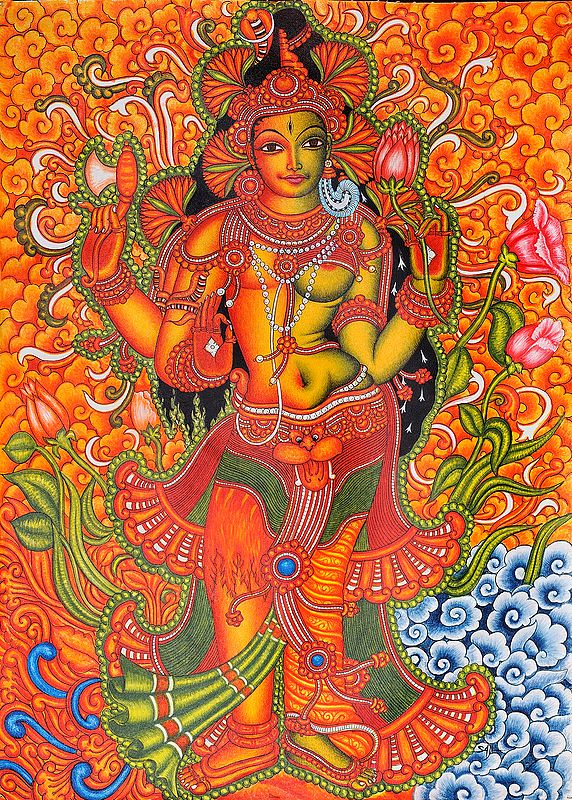 $595.00
A sharp image of androgyny as expounded in the shastras, the Ardharishvara is an unmistakably Indian symbol. It is a half-Shiva and half-Parvati figure; a confluence of purush and prakriti, of tandava and lasya, of the masculine (energy) and the feminine (matter). The resulting image is one of great beauty and significance, as could be seen in this handpicked Kerala mural. The murals of Kerala are not as well-known as those of Rajasthan, but they are in a class all their own. Having originated as early as the eighth century, a profusion of these murals dated between the fifteenth and nineteenth centuries are to be found in the annals of Kerala. The one you see on this page is a contemporary work of art done after traditional Kerala murals.

The Ardhanarishvara stands against a background of dense sunset-coloured clouds. A network of green vines and pink and white blooms frame the figure, like a natural aureole. The central figure is formed in the best proportions of both the male and the female forms, the distinction between the two given away by colour as well as silhouette. Decked up in streams of pearly white shringar, the silk clothing of the divine is held below the navel by a kirtimukha brooch and floats about the figure as if floating. The pale blue clouds at the feet of Devi Parvati and the blue jets of stream at Lord Shiva's complement the vibrant colour palette that dominates the composition. The soothing effect of these colours are matched the superb calm on the beauteous face of the divine. 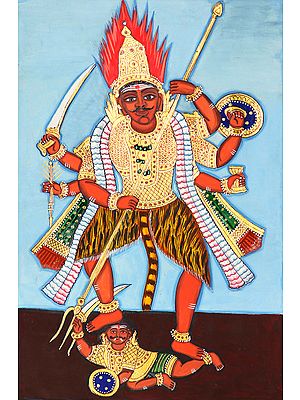