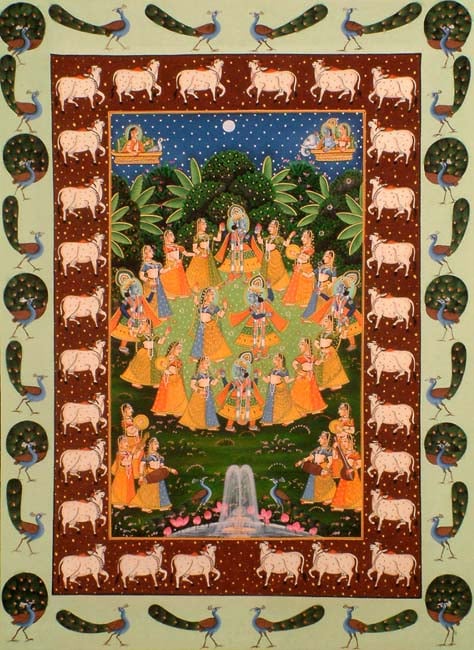 $125.00FREE Delivery
This item can be backordered
Time required to recreate this artwork
4 to 5 weeks
Advance to be paid now
$25.00 (20%)
Balance to be paid once product is ready
$100.00
Notify me when this item is available
Splendidly beautified (mandita) by the circle (mandala) of gopis, Krishna assumed as many forms as there were women and entered in between every two of them, placing his arm around the neck of the adjacent female. No sooner had he done so than there thronged in the sky, hundreds of heavenly chariots, carrying celestial couples eager to view the rasa dance.

There arose from within the ring of dancers, the din of jingling bangles and anklets, along with the tinkling of the small bells attached to the girdles of the gopis. The lord shone splendidly like a brilliant sapphire set in gold. With waists bending and breasts heaving due to the vigorousness of movement, perspiration trickling down faces, braided hair and girdles loosening in consequence of the dance, it seemed as if flashes of lightening (the gopis) were illuminating a circle of clouds (formed by the numerous Krishnas.

The gopis, their voices sweetened with melodious ragas, sang at a high pitch, the reverberations of which still resound in the world. One sang in chorus with Krishna in a higher pitch, and the latter applauded her performance with the words "Well done." When another of her friends rendered the same piece in raga Dhrupada, she too was honored by the lord.

One kissed Krishna's hand resting on her shoulders, and another fatigued gopi pressed his blissful (shivam) lotus-hand to her two breasts. Even as a child would play with his own reflection (sva pratibimba) in a mirror, so did the lord sport with the beauties of Vraja, who, beyond themselves with joy, forgot even to re-adjust their disheveled hair, or arrange their garments and brassieres in disarray.

(Description according to the Shrimad Bhagavata Purana).