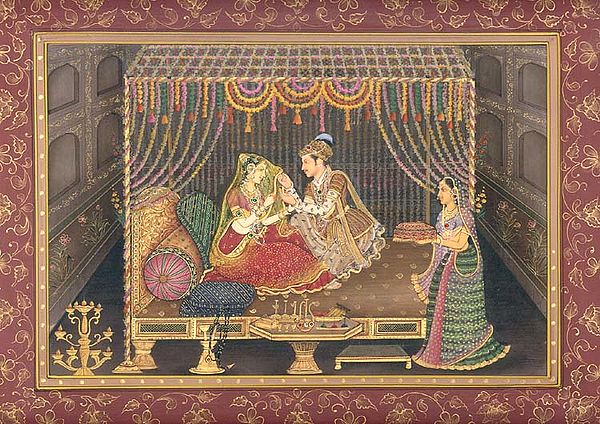 $360.00FREE Delivery
This item can be backordered
Time required to recreate this artwork
8 to 10 weeks
Advance to be paid now
$72.00 (20%)
Balance to be paid once product is ready
$288.00
Notify me when this item is available
The painting depicts the most traditional form of the concluding part of an Indian marriage, the wedding night, when the groom meets his bride for the first time. In India, the wedding night is every young person's most cherished dream in life. The wedding night is the most sacred ritual of love when the wedded couple unites not only physically, but there also emerges a new relationship, a relationship of love, confidence, mutual trust and concern, a relationship that shares life, all its achievements and failures and all its pleasures and pains. In Indian tradition, the wedding night has the sanctity of a divine act, as there reflects in it the divine act of creation. It leads the bride to fruition and the groom to the fulfillment of his obligation towards the divine process of creation. Metaphorically, a young woman, without having wedded and united, is considered like a barren tree, which does not bear fruits.

The wedding night, despite all kinds of social and sectarian diversities of Indian society, is one of the most common features of an Indian marriage all over the subcontinent, but despite, and quite strangely, it has no prescribed mode or form. It also does not have any religious rites associated with it, though quite a number of them precede it in different traditions. Ordinarily, the bedroom of the bridegroom is adorned in best possible fashion using, as here in this painting, laces of colourful and fragrant flowers. Provisions are made also for sweets, snacks, betel leaves, perfumes and drinks and huqqa etceteras as suited the customs, social norms and the status of the wedding groom. The usual image of the bride is that of a coy maiden, who is pushed into the room by her teasing sister-in-laws much before the groom makes his way there. With her face covered by a thin veil and eyes buried deep, almost into her own bosom, the bride, seated on the bed, specially decorated for the wedding night, awaits the bridegroom who, she knows, will not spare her and, as a matter of fact, she, too, would not like to be spared.

This marvellous painting depicts some princely groom celebrating his wedding night. The large palatial chamber has in its centre a big bed, which comprises of the golden legs, arms and back. The back of the bed has been decorated floral designed carved on gold sheet using relief technique. The bed has over it a golden frame for ordinarily supporting the mosquito net. The frame has been beautifully adorned with flowers and acquires a canopy's look. Besides the laces of flowers, the four poles of the frame have been adorned further by bunches of flowers. The bed has laid over it a golden sheet, though without the usual flowers scattered over it. There lay a huge bolster towards the back of the bed. The bride is seated against it, though there is in between a large green cushion. A couple of blue square cushions lay on her right. The chamber has been provided with a golden huqqa, lamp-stand comprising of eleven lamps of which ten are in flames, a hexagonal central table with tray of fruits, panadana or the betel leaves container, goblets and surahi containing liquor and various kinds of perfumes and a low chowki serving as step to ascend the bed. A serving maid is in attendance with the box of jewelry, for the groom is supposed to make gifts to the bride when he first sees her face and before she allows him to have with her sexual union. Though the figures are clad in Rajasthani character, except the turban of the prince, yet in the style of rendering it has Mughal elegance, finish, splendour, minuteness of details, sharp features and an overall graciousness. The painting make wondrous attempt at discovering bride's coyness and modesty and bridegroom's eagerness and haste to behold the beauty that the veil conceals behind it. 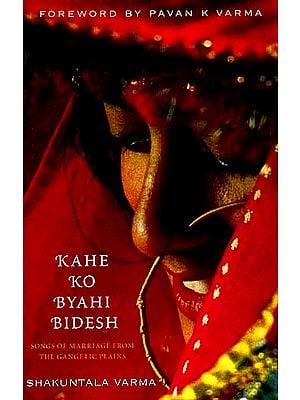