Ganesha on His Mount 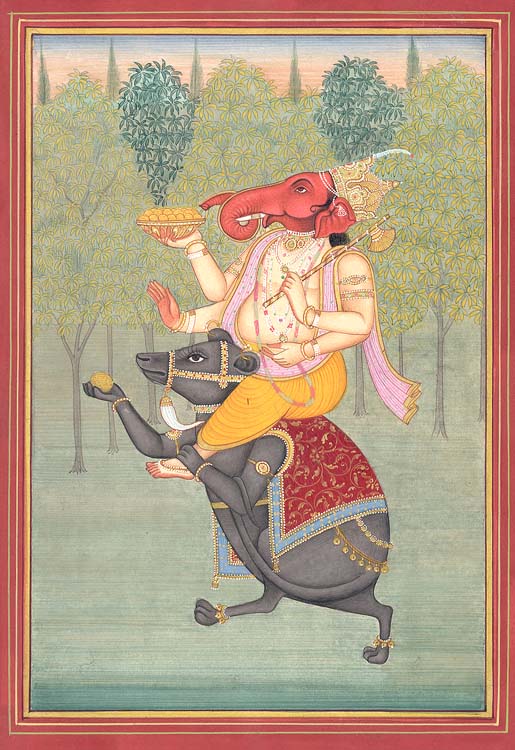 $175.00FREE Delivery
This item can be backordered
Time required to recreate this artwork
6 to 8 weeks
Advance to be paid now
$35.00 (20%)
Balance to be paid once product is ready
$140.00
Notify me when this item is available
Ganesha has everything that is fascinating to anyone who is interested in religion or India or both: charm, mystery, popularity, moral ambivalence etc. His popularity is multifaceted and widespread.

Reflecting the style of the Basholi miniature, Ganesha rides on his vehicle, the rat. His vermilion face contrast sharply with his salmon coloured body. His elephant head is the supreme attribute, representing the syllable Om, which eternally vibrates in the whole inverse. In one hand, he holds the axe given by Parshurama to him, and in the other he holds a bowl full of modakas, his favourite sweet. One front hand is raised in abhaya mudra and the other is in the uruhasta mudra, resting free and flat on his lap.

Ganesha sits astride the harnessed and saddled rat which is large in proportion, grey in colour and royal in attire. His forelimbs are like humans and the hind legs are thin and small. He is decorated with jewellery like his Lord. The over cloth is as rich as the harness is stone studded. According to Ganesha Purana, it is only in his last incarnation that Ganesha used the rat as vehicle.

The foreground and the background is done in soft hues of green in comparison to the brilliant tones used for Ganesha and his mount.