Ganesha - The Presiding Deity of the Root Chakra 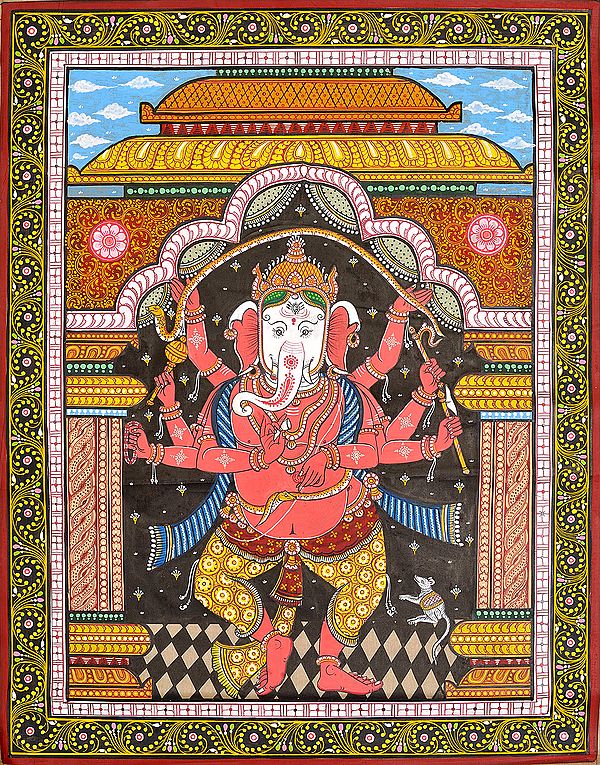 $140.00FREE Delivery
This item can be backordered
Time required to recreate this artwork
6 to 8 weeks
Advance to be paid now
$28.00 (20%)
Balance to be paid once product is ready
$112.00
Notify me when this item is available
With the bulky legs bent at the knees, the right foot slightly raised, Ganesha stands with as much grace as is possible for one with such a massive body. The white faced deity has a pink red-body and eight arms. The multiple limbs attract attention not only by their sheer number but also by the attributes. In the two hands held above his shoulders, he holds a long snake. Besides being associated with Shiva his father, the snake represents the kundalini, the cosmic energy coiled at the base of the spine. To arise, the Kundalini must pass through seven chakras and the root chakra is presided over by Ganesha. In the four hands held away from the body, he holds the lasso, the mace, elephant goad and an axe. In the front two hands he holds a broken tusk and a modaka. Some myths associated with the damaged tusk state that he used it to kill a demon, while others insist that he used it as a writing instrument to pen the epic Mahabharata.