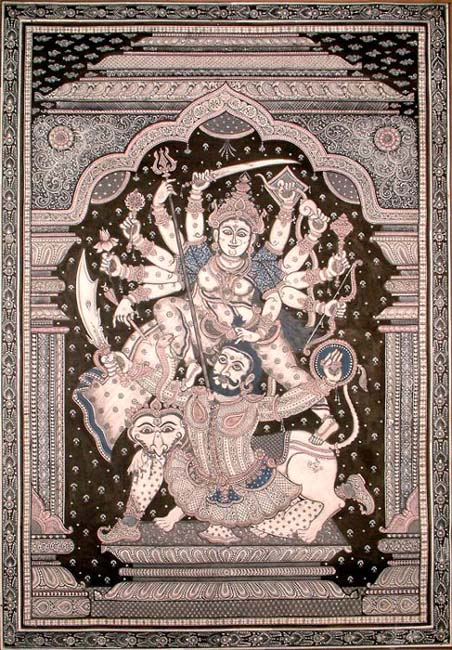 $325.00
This item can be backordered
Time required to recreate this artwork
6 to 8 weeks
Advance to be paid now
$65.00 (20%)
Balance to be paid once product is ready
$260.00
Notify me when this item is available
Save to Wishlist Send as E-card Share by Email
One of the most impressive and formidable goddess of the Hindu pantheon is the goddess Durga. Her primary mythological function is to combat demons who threaten the stability of the cosmos.

In the above role she is depicted as a great battle queen with many arms, each of which wields a weapon, gifted by various gods, whose energies combined to create her. She rides a fierce lion and appears all set to take upon the task for which she has manifested. Here, we see her in action with the demon she is most famous for defeating i.e. Mahisa, the evil buffalo. Hence, her most popular epithet, Mahisa-Mardini.

Mahisa appears with a demonic look on his face and weapons in his hands. But his existence is short lived as Durga holds him by his hair and pierces his chest, finally bringing to his end, a demon who had caused a cosmic crisis. This image in action can be seen in a niche with a finely crafted arch and pillars as seen in most North Indian temples.

The artist has used bare minimum colours so as not to distract the viewer from sturdy draughtsmanship.