Goddess Kali in the Cremation Grounds 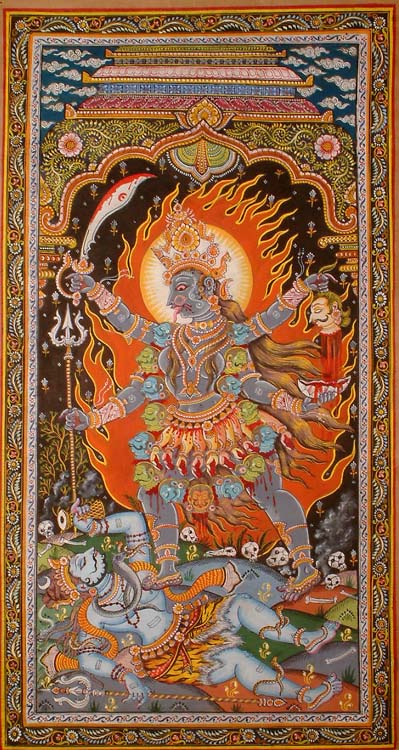 $395.00FREE Delivery
This item can be backordered
Time required to recreate this artwork
6 to 8 weeks
Advance to be paid now
$79.00 (20%)
Balance to be paid once product is ready
$316.00
Notify me when this item is available
In the hierarchy of manifestation Kali stands as the highest, the most abstract, aspect of divinity. It is under her fierce aspect of Kali, that the consort of Shiva (Parvati) is mainly worshipped.

The dark, naked Kali stands with unbound and disheveled hair. She wears a garland of Skulls, a girdle of human hands  all still soaked in blood. The artist probably found the nakedness of Kali too discomfiting and therefore has adorned her with exquisite jewelry, besides a fancy crown. She stands on Shiva's chest, holds in her hand a blood stained scythe and a freshly cut human head; the blood dripping from the male head is collected in a cranium of a skull. In her right hand she holds Shiva's attribute, the trident. Kali's face is shown in profile; the blood shot eyes looking fearsome and the tongue is outstretched and smeared with blood.

The corpse of Shiva lies on the ground even as he still holds the drum and the trident. Snakes abound on his body. The scene is that of a cremation ground with bones and skulls scattered around; the smoke rising from the burning pyres; in fact the environment looks as fearful as the form of Kali herself.