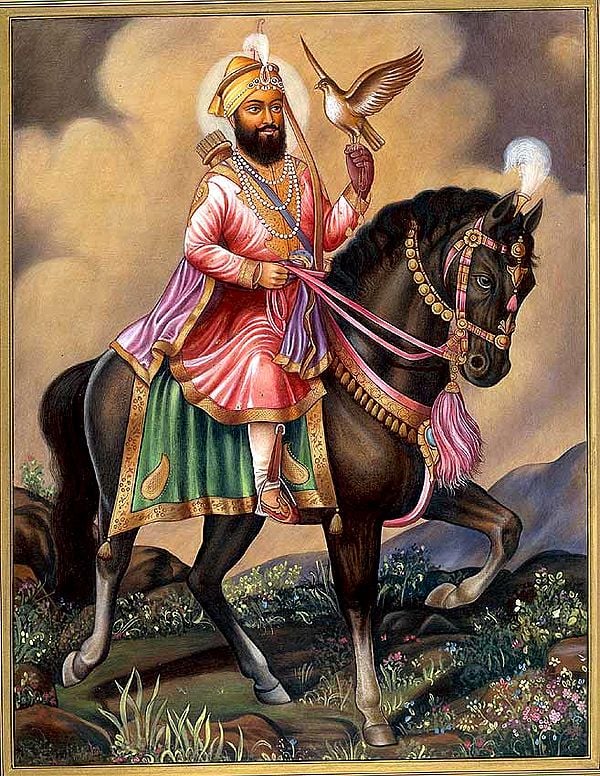 Gobind Rai, as he was originally called, succeeded his father, who had been executed in Delhi, to the gaddi in 1675. The period of his leadership was one of the most eventful in the history of the Sikhs and by the time of his death at the hands of an assassin in Naded, in the Deccan, the religion had assumed many of the aspects which characterize it today. He is remembered for three achievements in particular. First in 1699, he created the institution of the Khalsa, recognizable by its appearance. These included the wearing of the turban and the five Ks which have now become the hallmark of the Sikh. Members also adopted the name Kaur or Singh, hence the Guru is known as Gobind Singh rather than Rai. Secondly, he sanctified the use of military force, though only in the defense of justice, the Dharamyudh. Finally, before his death he declared that the Adi Granth should be the only visible Guru of the Sikhs and installed it as his successor. Thus Guru Gobind Singh was the last of the Sikh Gurus.

Guru Gobind Singh was a prolific poet as well as a soldier. However, he did not include his compositions in the Adi Granth. They are to be found, together with the works of some of the court bards, in the Dasam Granth compiled after his death by Bhai Mani Singh.

When one sees Guru Gobind Singh rendered in art, he is envisioned almost always as here: a warrior figure, astride a spirited horse, armed alike for attack and defense. Symbols of sovereignity - like a falcon perched on the hand, kalghi-aigrette in the turban - are also brought in as a part of his iconography. The careful delineation of the noble head, the keen look in the eyes, and the lithe stance, combine remarkably well with great sumptuousness of coloring, and refinement of line in this portrait. Every detail is worked upon with great care: the fine jama secured with a patka, the golden turban, the towering kalghi, the bow slung across the left shoulder, the rich caparisoning of the horse, and the reins held masterfully in the hand.

Book: The Sikhs Images of a Heritage