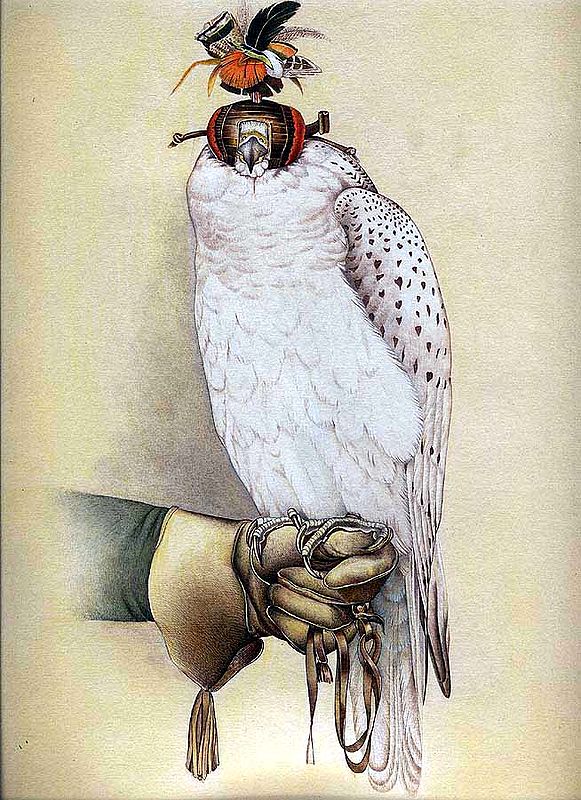 $250.00FREE Delivery
This item can be backordered
Time required to recreate this artwork
5 to 6 weeks
Advance to be paid now
$50.00 (20%)
Balance to be paid once product is ready
$200.00
Notify me when this item is available
This image is of a hooded gyrfalcon resting on the gloved hand of a falconer. Although the bird appears calm and immobile, its strength and ferocity are brilliantly conveyed through its aristocratic pose. The artist has made a particular study of feather formation and the effects of light and shade on the plumage.

'Of all the birds used in falconry in this country, the Gyrfalcon had ever been ranked the foremost. Superior in strength and agility to every other bird of its size, and endowed with powers of flight equalled by none that wing the air, with a corresponding courage, he dashed into the air fearless of every other bird, however large; nor will he at times hesitate to dispute precedence with "the monarch of the skies".'

The definition of falconry is the taking of wild quarry in its natural state with trained hawks and falcons. It is reputed to be the oldest sport in the world, and probably originated in China around 2000 BC.

When a new hawk first arrives with a falconer, it is at unease in the new, unaccustomed environment. The hood is the temporary blindfold placed over the hawk's eyes to keep it quiet and protect it from an environment which might otherwise upset it. It takes the form of a lightweight leather cap which is measured to fit snugly over the head, leaving a hole for the beak to protrude. At the base of the hood there is a system of interwoven leather braces, enabling the hood to be opened and closed. There are many different designs of hood from all over the world. Some are plain in design and color, whilst others are elaborately tooled and decorated, like the one shown here.

As shown, a falconer must also wear a leather glove to protect his hand from the grip of his hawk because the talons of a bird of prey are very sharp and powerful. The glove must be of a fair enough size to be able to accommodate the span of the bird's feet, and must be thick and fairly stiff to prevent the falconer's hand becoming bruised by the raptors powerful grip.

The Gyrfalcon enjoys the reputation of being the fastest, largest and most beautiful of all falcons in the world. Hence this beautiful bird has been the most prized species in falconry for hundreds of years and Arab enthusiasts are known to have paid enormous sums for this extremely valuable bird.