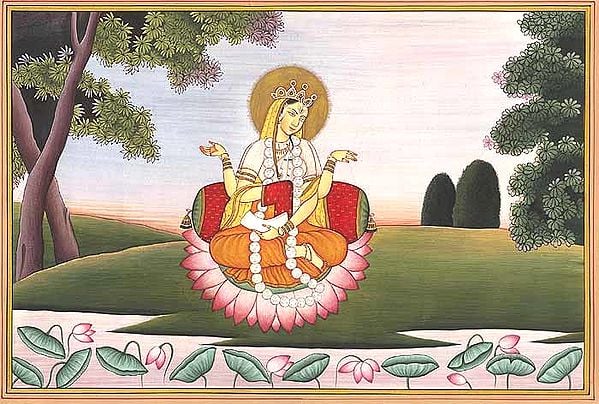 $195.00FREE Delivery
This item can be backordered
Time required to recreate this artwork
8 to 12 weeks
Advance to be paid now
$39.00 (20%)
Balance to be paid once product is ready
$156.00
Notify me when this item is available

In moments of trial and suffering, the tendency is to turn to our mother, assured of succour even when everyone and everything else fails us. She who has borne and nurtured us is the surest and most loving resort. Why should not the devotees, therefore, remember the very source of the universe, nay, and the greater cosmic energy, which manifested as Jagadamba, the mother of the universe? In the dhyana shloka the devotee - the poet - describes her as being as 'lustrous as a thousand rising suns' and the artist has tried to suggest this by color. Indeed, in the sensitive rendering of the calm face glowing with a golden luster, the artist has surpassed the poet.

The setting is idyllic. In the forefront is an expanse of water bedecked with lotuses. In the background is an open sky tinged with orange at the horizon. Trees frame the side of the painting in the center of which sits Jagadamba on a full-bloomed lotus. Consummate artistry has gone into modeling the breath-taking delicacy of her serene form. She is wearing a garland of skulls around her neck and carries a rosary covered in a silken bag in one hand and a book in another. Her third hand is in abhaya mudra, i.e., the openpalm position of the hand, signifying her capacity to grant freedom from fear. The fourth hand is in varada mudra, i.e., an open palm facing downwards indicating the generosity of the mother of the universe in granting boons to her devotees, be they the gifts of dharma (righteousness), artha (material goods), kama (emotional fulfillment) or moksha (salvation). The rosary invisible to the eye because of its covering signifies a silent and heart-felt prayer for the welfare of all. In our more troubled moments, we often question the divine mother's concern for our welfare, but the covered rosary is a reminder to us that she labours dedicatedly though silently for our welfare even if this may not always be obvious to us. The rosary covered in a silken sheath is also an indication that prayer when sincere need not necessarily make an exhibition of itself by way of ritual and tradition, rather it gets intensified by withdrawing into a quiet dialogue between the devotee and the deity where no one else intrudes. The book in Jagadamba's hand is representative of knowledge of the Shastras (scriptures). She, as stated in the verse at the head of this description, is Vedajanani, the Mother of the Vedas, hence, also vedaidya, i.e., one who can be known by the knowledge and understanding of the essential truths of the Vedas. The hand in abhaya mudra reminds us that such knowledge of the real, of the indestructible self within makes for fearlessness in the face of all adversity.

Jagadamba's three eyes indicate that she is the omnipotent, omnipresent and omniscient force behind the created universe. The crescent moon on the forehead of the mother of the universe indicates her sovereignty over the celestial spheres, whereas the lotus she is seated upon tells us of her command over the earthly domain. The lotus flower also has a deeper significance. Though it grows on marshy ground, it yet preserves its pristine beauty despite its unfavorable surroundings.

Jagadamba sitting on a lotus brings home to us the truth that a man who has realized truth lives in this world of sound and fury yet remains steeped in the calm of the eternal self. Hence, the devotee prays to the divine mother:

The poet has described Devi as lustrous as a thousand rising suns and has, in this way, delineated the most enchanting and resplendent halo of her beauty. Nevertheless, the artist has devoted his art and imagination to embodying that beauty and dignity of poetic description in painting the very brilliant face of Devi. There are occasions galore when an artist excels a poet; yet on many an occasion a poet may excel an artist. Here in this portrait the artist has not only succeeded in personifying the sentiments of the poet, but has also synthesized the brilliant luster of the sun with its beauty, charm and glamour, all of which go to indicate that the artist has excelled the imagery of the poet. The yellowish light on the face signifying calm is worth noting; the stances of hands granting a boon, bestowing fearlessness, holding a rosary of beads and possessing a book reveal the aesthetics of proportion and the consummate excellence of limbs. Below the lotus-seat are seen lotus leaves adorning water, and the reddish brilliance of the lotus-flower is breathtaking. Verily, this portrait speaks of the dedication of the artist. The rows of trees planted in the backdrop have made the portrait lively and realistic. A lot of dedicated effort has gone into bringing out the light and shade effect, which not only enhances the beauty of the portrait, but also symbolises the neatness, glossiness and radiance of the color synthesis.
Free Shipping. Delivered by

Every Woman a Goddess: The Ideals of Indian Art (Article)

The Book of Devi (Book)