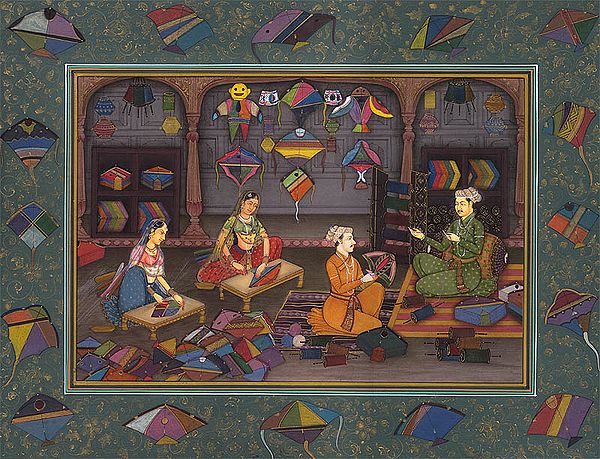 This colorful miniature captured in a thick dark green frame rendered with light gold flower motifs, forms the background and has inlayed display of a variety of kites painted at an equal distance.

Kite flying is one of the best festive delights in India. These bright colored kites with their colorful threads paint a perfect picture in the sky especially during harvest festival and the Indian Independence Day. It is an expression of patriotism and also marks the beginning of a new season. Kite making, as depicted in the painting on this page has been an activity since ancient times.

Here, two women sitting in their comfort are making kites kept on low heighted stools with varied colors and styles and the man sitting on carpet, seems to be having a serious conversation regarding the threads (manja) with the other, who affirms to be the highest priority as depicted by his posture and personality. The two women wear long skirts and contrasting blouses with a transparent chunri each, and the two men wear long robes, with the shop owner having small gold motifs on it, belts tied on their waists and stylized turbans adorn their heads. Kites with different shapes and sizes hang all over and the ones stacked up on the ground with a variety of colored thread rolls, shows the curiosity of the makers to finish the kite making process as the concerned festival is approaching shortly.

This item can be backordered
Time required to recreate this artwork
8 to 10 weeks
Advance to be paid now
$61.00 (20%)
Balance to be paid once product is ready
$244.00
Notify me when this item is available
Free Shipping. Delivered by